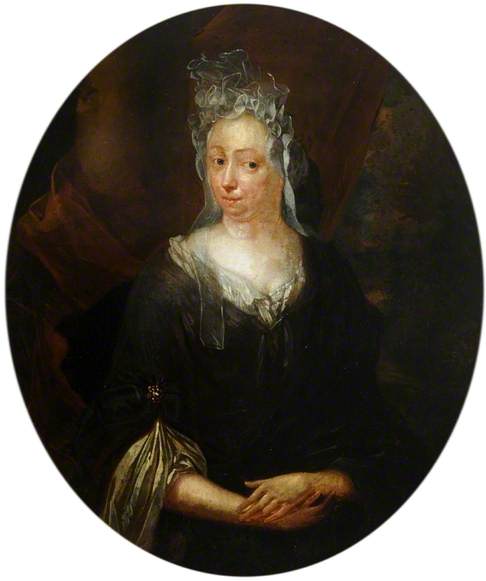 This picture is problematic in terms of identity of the sitter. It is an unflattering portrayal of an old woman, possibly a widow. One questions that the formidable Duchess of Marlborough would have been portrayed this way at any age (or would have stood for it). There is a 1722 portrait of her with her granddaughter by Maria Verelst, when Sarah was newly widowed and 62, in which she is portrayed very favourably indeed: https://bit.ly/2XOcQcq (scroll down to image). The NPG iconography for Sarah, Duchess of Marlborough (link below) does not include this picture or any like it: https://bit.ly/3kIaqFh The sitter wears a fontange, a kind of headdress associated with the late 17th and early 18th centuries, about 1690–1710. Sarah Jennings was in her 30s and 40s during that period, and the sitter in this picture is a clearly an older woman. [Group Leader Richard Green]

The Collection has commented: ‘In terms of the identity of the sitter it is possible that this is how it was attributed in 1913 when it was gifted to the Gallery or it may a later attribution. Once we have access to the history file we will be able to provide further information about this and we can take the discussion further. The history file holds limited information about this painting. It was donated in 1913 with the identification of Sarah Jennings and we would like to retain that until we can do further work on this. It was attributed to Kneller at the time but we do think 'British School' is more appropriate. According to the notes there is a very indistinct LB on the bottom right of the painting. We are happy to change the title to ‘Called Sarah Jennings’. We are also happy to open this painting up to discussion to see what people think about it.’

Alistair Brown, on behalf of Art Detective adds: 'For my own part, am wondering whether the image is not French in origin.’

I agree: possibly French, or British influenced by France, but also possibly from elsewhere in Continental Europe. As always with oval portraits, it would be helpful to know whether the canvas on its stretcher is actually oval or whether the image is a painted oval on a rectangular canvas. If the latter is the case, please could we see a photo of the whole canvas? And it would also be helpful to see photos of the reverse and the frame -- even if only digital snaps.

This cannot possibly be the Duchess of Marlborough, unless one were to imagine a malicious caricature, which is rather unlikely in this format. A French origin is certainly not out of the question.

As the word implies, the fontange style originated in France, but it was also worn in England, as here:

Richard, I will ask the Collection on Monday these questions. Thanks, David

Thank you to everyone for your comments. At present I am not working at the same site as this picture but I will enlist the help of a colleague to answer some of the questions about the physicality of the work and the frame.

There are images of Madame de Maintenon wearing a fontange, but this is too unflattering and too informal to be her.

I don’t think it is terribly unflattering. Is this possibly by the Dutch artist Arnold Boonen (1669–1729)? I have attached an extract of this work and Boonen’s ‘Portrait of a Lady Slicing a Lemon (after Godfried Schalcken)’. https://tinyurl.com/5n8tfzhk. I thought the impish faces seemed similar. I also think the work at this link is similar. https://tinyurl.com/2p84vx9m

I do not find that convincing, Marcie.

Hoping this will help identify this lady: The fontange was at its most fashionable in wealthy circles in England, France and other parts of Europe, from c. the mid 1680s, becoming taller and very fashionable in grand society in the 1690s- and still worn c.1710. This lady is not in mourning dress. A Society widow would be very unlikely indeed to get herself painted with a low neckline like this one. See the plain high collars and plain cuffs in these two examples:
- The Duchess of Cleveland after Godfrey Kneller c.1705 in mourning dress https://bit.ly/31EzMNB
- Mary Kennet wife of William Mackenzie, 5th Earl of Seaforth by circle of G. Kneller Fortrose Town Hall. Could be 1701 in mourning for her father-in-law, the 4th earl. https://bit.ly/3INYhZo

For what it’s worth, I think this is a delightful portrait.

I wonder if this might be the painting that is mentioned in the ‘Carlisle Patriot’ of May 9, 1863, as being in a Christie Manson & Woods auction (see attached). The collection had belonged to Mr. Elhanan Bicknell (1788-1861).

Some of Bicknell’s paintings are also detailed in footnote 9 of his Wikipedia page. https://en.wikipedia.org/wiki/Elhanan_Bicknell

Carlisle is in Cumbria and Barnsley in South Yorkshire. I expect there is no connection, especially since pictures at least purported to be of Sarah Jennings are not especially uncommon.

"Samuel Joshua Cooper and his wife Fanny were a wealthy couple from Barnsley who bought paintings and sculptures on their travels across Europe. Each spring, from 1873 onwards they would travel to Paris for two months. The receipts and notebooks that they kept show that they purchased pictures, sculpture and furniture. The paintings they collected formed the start of the Cooper Gallery collection...Barnsley Archives in the town hall [hold] a notebook once belonging to Samuel Joshua Cooper. When travelling around Europe with his wife, Fanny, he kept all receipts and records of purchases in this little notebook. It contains Mr Cooper’s personal notes often including where he purchased items from and for how much."

So, the picture could have been bought in Europe, especially Paris, but the fact it was attributed to Kneller and thought to portray Sarah Jennings makes it rather more likely that it was acquired in the UK. Ideally, the gallery could inspect the notebook in the Barnsley Archives for a mention of this picture and its purchase.

The practice of incorrectly identifying a sitter in a portrait as a famous figure, whether in good faith or not, is hardly unknown among picture dealers, and was probably more prevalent formerly than it is now. The same applies to attributions to well-known artists. I suspect that may well have happened here.

So far, we have "Portrait of a Lady with a Fontange Headdress," ca. 1690-1710, presumably British School. Of course, even if the picture was acquired by Samuel Cooper from a British seller, as was probably the case, that does not preclude continental origin. The identification of the sitter as Sarah, Duchess of Marlborough is quite implausible.

Another lady with a fontange (which is also known as a frelange):

I agree with Jacinto that there is no reason to think that this is the portrait plucked for some reason from the record of an apparently random provincial C19th sale. Portraits of (Sarah) the Duchess of Marlborough are very common indeed - she was a very famous figure in her own time and indeed for centuries afterwards, and there are dozens and dozens of portraits of her, real and imagined, blowing about. They come up at auction all the time, and there are over a dozen on Art UK that bear her name (or used to), even excluding this one...which we must as it has nothing whatever to do with her, at least as a possible sitter.

I tend to agree with Alistair and Richard - I'd be surprised if this were by a British artist...which is not to say it couldn't have been painted here. Unless someone finds another version or print after it, or there's something very helpful on the back, I think we're unlikely to identify the sitter.

Morning. Just to clarify the papers of Samuel Joshua Cooper are no longer at Sheffield Archives and are now with the Barnsley Archive Service. We have reviewed these a number of times in relation to paintings in the collection and there are no receipts relating to the purchase of this painting. The painting is also not included in Cooper's notebook. In the early 20th century inventory it is included as Sarah Jennings, Duchess of Marlborough so that doesn't help. As we are having to focus on essential activity on site due to council and government stipulations this enquiry will need to wait until we can review the situation in the New Year. Happy Christmas to everyone.

When possible, it would be desirable to have a close-up of the monogram (LB) mentioned by the collection as being at lower right, as it cannot be made out (by me) in the Art UK image.

We currently have a date scheduled in for January to take the piece out of its frame and do some photography both in the frame and out of it to get as much information as possible. This will include the initials. In the meantime I wish you a Happy Christmas and we will be in touch in the New Year.

Thank you, Barnsley. I hope the effort will prove fruitful.

Not Sophia of Hanover. This is too informal and casual for that. See below for comparison:

I hope you will find attached three photographs of this painting. As you will see it is an oval canvas not a feigned oval on a rectangular canvas. The label identifying the sitter has obviously been in place for some time. S J Cooper believed it to be Sarah, Duchess of Marlborough. He did inherit a number of paintings and we can not find any evidence of his purchase of this painting so it is possible that it came to him through that route. You will see that the piece is in poor condition and needs cleaning. My colleague spent some time searching for the initials mentioned previously but could not locate them. They could be lost under the dirt and will be revealed eventually or it could be that they aren't there and a previous curator was mistaken.
We look forward to hearing your thoughts about this piece.

The picture strainer seems to be of oak (with a later pine cross bar). An oak strainer would be unlikely to be British. This fits with my sense that the style of the picture is continental, possibly Low Countries.

Yes, Jacob, the picture has a certain quaintness that is more likely to be Low Countries than, say, French. The style does not look British.

I would suggest "Portrait of a Lady with a Fontange Headdress," ca. 1690-1710, by an unknown artist. If deemed suitable, a note could be added to the Art UK entry like "It has been suggested this may be by a continental artist, possibly Low Countries." Pending input from a Group Leader, this is probably ready for closure.

Page 127 of this book shows how the painting has been catalogued over time.

Netscher, of course, was Dutch, but this is too late for him (d. 1684) and this was not his sort of female portrait.

This https://bit.ly/3EPJD2m is a typical Netscher portrait.