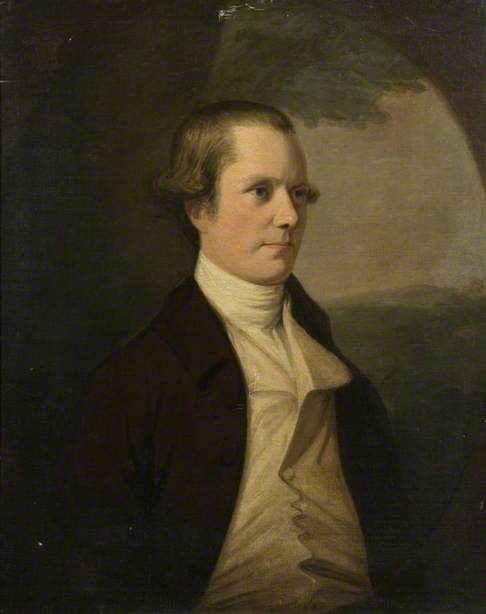 The Collection has added: 'The information Wardown Park Museum has for this painting describes it as being a portrait of Robert Bloomfield by John Hoppner, however the Bloomfield Society have queried this. Can anyone help identify the sitter for this portrait, or indeed confirm the artist?'

The sitter looks 30 or older to me, so if it were Benjamin Bloomfield, that would put the picture at 1798 or later, which seems too late for the hair/dress. Lou Taylor could be more precise, no doubt.

The other question is the Hoppner attribution. If this is by him, it is not one of his best portraits.

Not by Hoppner in my experience. But less easy to identify who it is by.

The painting of Robert Bloomfield by John Hoppner has been dated to the year 1800 by Horace Pitt Kennedy Skipton in his book John Hoppner in the year 1805.
He states 'the portrait shows an earnest face with wistful eyes and a forehead of some ability but limitations are suggested by the mouth; it is the work of a real artist.
Also William McKay and William Roberts in their Catalogue Raisonne of John Hoppner, 1909, also confirm that it is by Hoppner.
'Bust in an oval, looking upwards to the right wearing claret-coloured coat and white waistcoat.'

Could it possibly be William the younger Pitt ????

Might the provenance of the painting help with identifying or confirming the sitter and artist?
The Biggleswade Chronicle (27 Sep 1957) reported that an “[…] oil painting of Robert Bloomfield […] was bought by the Luton Museum […]. The portrait, by Hoppner, was given by the Rt. Hon. A. T. Lennox-Boyd, M.P., and his wife Patricia, and was sold for 30 guineas. Professor Sir Albert Richardson, past president of the Royal Academy, who opened the sale, urged that the portrait should not be allowed to leave the country.”

In the third National Portrait Exhibition, 1868, a portrait of Bloomfield, owned by Mr W. Percival Boxall, was shown (No. 168). It is described as “Bust to l.; claret-coloured coat, white waistcoat. Canvas 32 ½ x 26 ½ in.” https://bit.ly/3wcpIVy and in the two sources cited above by Joe Hayto (https://bit.ly/2Qwvl1I and https://bit.ly/3hzCSHX)

Intriguingly, in 1912, a woman called Sybil B. Reid enquired about the whereabouts of Mr. Boxall in “The Connoisseur” (Vol. 32). She wrote “My family has long possessed an unidentified portrait, which an expert has lately pronounced to be identical with one lent to the National Portrait exhibition at South Kensington in 1868 as Robert Bloomfield, the “Cobbler Poet” by John Hoppner, R.A., and then the property of Mr. W. Percival Boxall […]” https://bit.ly/3fvbc4z

Is there any indication on the back of the painting confirming that the one donated by Mr. Lennox-Boyd in 1957 and the one owned by Mr. Boxall in 1868 are the same?

So Andrea, is the implication that a portrait owned by Boxall in 1868 is the same picture said to have been long possessed by someone else 44 years later? Or are they supposed to be two different versions of the same portrait?

Mrs Reid was looking for information about Mr. Boxall "to compare the two portraits, and perhaps get further light frown on our (i.e. Mrs Reid's) picture and its authenticity", so it seems there were two versions of it.

The handling of the waistcoat, particularly, strikes me as poor for Hoppner.

The following is from the NPG's listing of all known likenesses of Bloomfield:

McKay & Roberts is not to be relied on. We should proceed on the basis that this portrait is not of Bloomfield, on the grounds of lack of likeness and lack of early documentation. And not by Hoppner from my experience of the artist.

It is worth noting that the canvas is not a standard British canvas size. If it is unlined, a photo of the back could be helpful.

In style and costume I think the portrait is late 18c, rather than early 19c.

I have seen another version of this portrait somewhere in the mists of time. I seem to recall it had an India link and was credited as being by Thomas Hickey. I will endeavour to see if I can unearth more to sunstantiate this....

There must be a Hoppner expert who can address the attribution here.

There is a Hoppner expert, John Human Wilson, whose thesis from some time ago I have seen in the past. But this painting is NOT by Hoppner in my experience. Personally, I'd leave the Hoppner idea at that. Hickey is worth a thought.

The problem, Jacob, is that the picture is currently firmly listed as by Hoppner, not even "attributed to" him, which would be more reasonable. I can understand, of course, that the collection would hardly agree to alter the matter without the input of an expert, barring irrefutable evidence coming forward.

Perhaps Bendor Grosvenor would care to comment on authorship.

Jacinto, I'm not sure if you're aware that Jacob was Curator of 18th century portraits at the NPG 1983–2001, and then Chief Curator of the Gallery 2001-2011. Bendor certainly has a huge fund of knowledge and experience himself (though he wasn't even born when Jacob began his professional career!), and we are very fortunate to have both of them here. I rather doubt, though, he will argue with Jacob's assessment of the Hoppner idea.

For what it's worth, I concur with everything Jacob has said. I can see nothing even vaguely reminiscent of Hoppner in the portrait; the sitter's resemblance to Robert Bloomfield is to my eye small to non-existent (it seems limited to the short cropped hair at the front); and I also agree that the work is likely to be late C18th rather than early 19th. As for Benjamin Bloomfield, I'm afraid he looks even less like our man.

Human Wilson's Ph.D. thesis on Hoppner (for the Courtauld) was written in 1992: https://bit.ly/3vO7ytx. It seems to have been the first study since McKay & Roberts published theirs in 1909 - as Jacob says, the latter is a work that should (like much art historical wisdom from the early C20th) be taken with a large pinch of salt.

Osmund, I suggested Bendor Grosvenor because he's the relevant Group Leader and has recently commented on many other pictures of roughly the same period, so I thought he could also comment on this one for the sake of another informed opinion--meaning more informed than mine. I was not implying Bendor would "know better" than Jacob, whose opinion I certainly respect.

Also, to clarify my wording further, by "expert" I meant someone officially or formally considered an authority on a specific artist, not simply someone who may be quite knowledgeable indeed about that artist's oeuvre.

Hoppner's style and manner is fairly easily noticable if you know what to look for, which just comes from looking at many, many examples. In this instance I have and I concur with what has been previously stated - it simply isn't by Hoppner.
I'm sorry not to have moved forward with the Hickey attribution; I'm ploughing back through my old files to see if I can find anything!

Miles- there is a Hickey in the Tate.A young man-18ish - in a green Jacket. I think it might be a self portrait,but the blurb isn't clear. It has a similar style and feel to the painting here- same sort of expression on the face,- handling of the cravat. It might even be a younger version of our sitter here-perhaps.???

The following advertisement appeared in the Times in 1853.

I think in 1853 people still knew what Robert Bloomfield looked like. His books often include a portrait frontispiece. My assumption is that a Hoppner portrait of the poet once existed but the Wardown Park portrait isn't it.

Has the time come to close this discussion on the basis that we do not know who is portrayed? It is not Bloomfield, on grounds of lack of likeness and lack of early documentation.

Page 347 of Art Prices Current (Wm. Dawson & Sons Limited, 1928) describes a Hoppner portrait of Bloomfield as "half-length oval looking to the right....". Any contributor with a full copy, could you please post the rest of the entry?

This discussion, “If not the poet Robert Bloomfield who is this sitter?”, has attracted 25 comments since it was launched in May. I am now recommending that we close the discussion on the basis that we do not know who the sitter is, subject to the collection and my fellow group leader.

Despite the apparent identification of the portrait as Bloomfield by Hoppner as early as 1853 (post by Keri, 16 June), it is clear that this portrait is no such thing.

On the sitter, the Bloomfield Society have questioned the identity for good reason. I have now had the opportunity to analyse documented portraits of Bloomfield, three of which are reproduced on the NPG website. His face was slightly longer and more muscular, less round and less flabby. His nose had a very slight wave to it. His chin was tighter. There is no evidence for the suggested alternative identification as Benjamin Bloomfield, 1st Baron Bloomfield. As such, we are left with a portrait of an unknown man.

On the artist, the portrait is clearly not by Hoppner. As Miles says (4 June), “Hoppner's style and manner is fairly easily noticable if you know what to look for, which just comes from looking at many, many examples. In this instance I have and I concur with what has been previously stated - it simply isn't by Hoppner.” I agree with this analysis. Hoppner’s handling of paint is livelier, his colours more forceful and his compositions more original. Miles has asked whether the portrait could be by Thomas Hickey, an intriguing idea. If there were a little more evidence, I think I could support the idea of an attribution to this artist.

We have however, thanks to several contributions, made progress on identifying the provenance of this picture.

Still recommending that we close this discussion on the basis that we do not know who the sitter is, subject to the collection and my fellow group leader.

Jacob, I am following up with an email to the Collection right now. David

Description
The information Wardown Park Museum has for this painting describes it as being a portrait of Robert Bloomfield by John Hoppner, however the Bloomfield Society have queried this. Can anyone help identify the sitter for this portrait, or indeed confirm the artist?