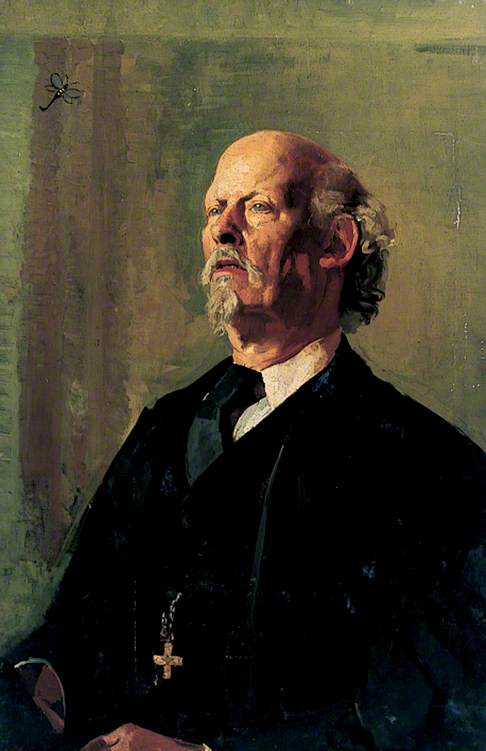 The acquisition method states that this is a 'Slade student work', and the bee symbol in the upper left-hand corner could be the artist's signature. Perhaps this is enough information to work out the identity of the artist? [Unfortunately the digital image is of such low-resolution that no details can be generated at this moment, but we have asked the Collection for a higher-resolution image and they are currently arranging this for Art UK]

The Collection have commented: ‘The only information we have on this painting is that it was a Slade transfer, so not part of the prize-system, dated early 1900s. The bee symbol could certainly be something to look into. Can you post it for public discussion as a way of determining the artist’s identity? Very intriguing’

It is not a bee but more like a dragonfly.

But is the dragonfly a later addition?

Style rather similar to Charles Tattershall Dodd Ii, though I don't know if he had any Slade connections.

If this is Slade student work c. 1900, that is too late for Charles Tattershall Dodd II (b. 1861). However, there is a stylistic similarity to his work, as noted by Oliver.

Could this be by William Rothenstein (1872–1945)? He was a Slade student. Certain elements of the following painting are similar (pose, tie, brown & green background):

I think the sitter is Bernard Berenson (1865-1959). According to Wikipedia (https://tinyurl.com/yrhp7nkf), he was “an American art historian specializing in the Renaissance” and “while living in Italy, he converted to Catholicism.” This would explain the cross in the Art UK work.

In 1931, Rothenstein wrote an autobiography “Men and memories/recollections of William Rothenstein”. On page 118, he wrote: “In the autumn Bernhard Berenson asked me to come out to Florence to paint his portrait.” On pages 126 and 127, the painting of Berenson is described by Rothenstein’s friends ‘the Michael Fields’. I have attached the entry but here is the link, https://tinyurl.com/2jz34j6v.

According to Wikipedia, “Michael Field was a pseudonym used for the poetry and verse drama of the English authors Katharine Harris Bradley (27 October 1846 – 26 September 1914) and her niece and ward Edith Emma Cooper (12 January 1862 – 13 December 1913). As Field they wrote around 40 works together, and a long journal Works and Days. Their intention was to keep the pen-name secret, but it became public knowledge, not long after they had confided in their friend Robert Browning.”

There are two references to bees on page 127 of the book:
1. The “wild bees” are related to the book by Michael Field (“Wild Honey from Various Thyme” (1908)) that was just about to be released; and,
2. The bee is a symbol of a Rothenstein baby that was due in early 1908. The second bee reference is in the sonnet they wrote in honour of that baby, William Michael Francis Rothenstein, who was born on March 19, 1908 (according to the death registration for him in July 1993, on Ancestry).

Here is a photo of Berenson with his loupe. https://tinyurl.com/3vrssbva. It is very likely the object in the sitter’s hand in the foreground of the Art UK work.

I do not think this is Berenson. It does not match photos of him.

I agree, Jacinto. As per the attached, there is little if any similarity between the two men.

As a portrait by a Slade student it is possibly a teacher or Professor at the school. Trawl of their yearbooks and photo archives might reveal a candidate.

Yes, I agree that the composite shows different men. Thanks for creating it, Kieran. The painting that is discussed in the book is probably this one at the Villa Tatti in Florence, https://tinyurl.com/52a5hxs.

It is not a dragonfly, as they do not have such prominent antennae.

It would be good if we could see a higher-resolution close up of the insect.

Andy, the issue of a higher-res close-up was addressed in the introduction.

It seems vanishingly unlikely it's meant as a morphologically-accurate representation of *any* insect. It's an artist's personal doodle, rather reminiscent of Whistler's 'butterfly', which never looked anything like a real one, and evolved from a combination of the letter J-M-W as a butterfly with a sting into all sorts of more fanciful shapes (https://bit.ly/3kLHBrn). In fact the long antennae here rather suggest an intention of the same thing, and (echoing Martin's question at 24/09/2021 15:16) I wonder if someone put it there to imitate Whistler - either in a poor attempt to deceive, or (perhaps more likely) as a homage to the great man.

The Collection have provided a different TIFF image from which are drawn these two details.

The cross certainly has a dove superimposed on it, noted in the attached on 'dove crosses' as being specifically-though probably in another form since there are many- as the lapel-pin emblem of Deacons in the Church of Sweden.

Well, yes, this could be a Swedish clergyman.

The man in this picture has a head which is extremely large, I would say well above the average. The skull is long and the front is domed.

These characteristic are strongly hereditary. A family who has this characteristic is that of Kenneth, Lord Clark, and could be seen, even more pronounced, in his son Alan Clark.
Is it possible that this man is a member of Lord Clark's family?

The beard on the figure in the portrait: a little goatee, just on the very end of the chin like that would have been considered eccentric in England.
Prior to the Great War a man would wear a full moustache that might be quite long and waxed into "handlebars". Beards were popular and generally short but covering the whole chin, and if longer, covered the neck. That little beard would only be seen on a dandy, a painter, a poet or a foreigner. If you were a French Count, it would be acceptable. It wouldn't go down well in the House of Commons.