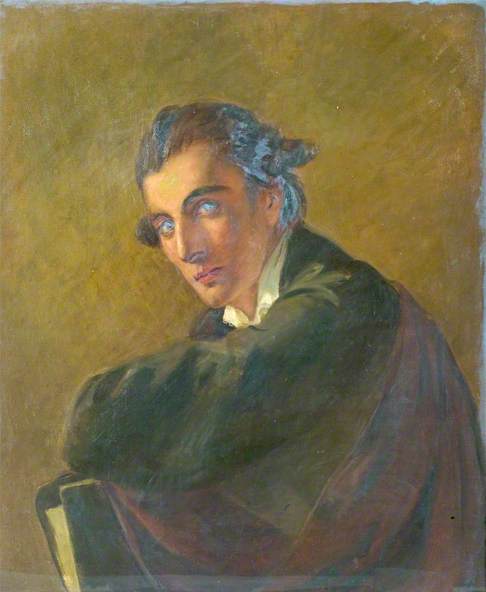 In 'Britain's Lost Masterpieces it was suggested that this is a copy of a portrait painted by Joseph Wright of Derby of one of his pupils. I suggest the sitter is a much more well-known artist, Peter Perez Burdett, who features as a model in several of Wright's works, including as the man taking notes top left of 'The Orrery' https://bit.ly/2Ra31SP. A fine portrait of Burdett (with his wife) in 1765 by Wright is in the National Gallery of the Czech Republic, Prague https://bit.ly/3t3jy8k.
The more finished work, 'Portrait of an Artist' https://bit.ly/3eXsp6z at the National Portrait Gallery, London was downgraded from 'by Joseph Wright' when it was realised it was not a self-portrait. In this case the similarity of the sitter to Burdett is close, although here he is a bit younger and leaner than when Wright used him as a model in 'The Gladiator', https://bit.ly/3eJW030 [scroll down to image] 'The Orrery' and (less certainly) 'The Air Pump'. https://bit.ly/3xBhvM8

The Collection has commented: 'Many thanks for your observations on this picture. Your thoughts regarding the status of the painting as an oil sketch are interesting, as are your comparisons of the facial features of the sitter to those of Wright's friend, Peter Perez Burdett. As you point out, the youthful appearance of the sitter would suggest a much younger Burdett than the one we see in either 'Three Persons Viewing a Gladiator by Candlelight', 'the Orrery', or indeed the Prague portrait of Burdett and his wife. However, to my mind, this presents a problem: the style and handling of the portrait would suggest a much later date in accordance with existing works by Wright. Indeed, his portraiture of the early 1760s shows itself to be very much in debt to the works of his tutor, Thomas Hudson and is quite unlike the relatively looser handling, and simpler compositions, of Wright's later portraiture, including the picture under discussion here.'

The NPG picture linked above, which is clearly another version of the same portrait, is dated c. 1765-1770 and listed as an unknown sitter by an unknown artist. Why is the Derby version called self-portrait after Wright of Derby, implying he is the sitter?

On the NPG website (link under Topic for discussion above), the extended catalogue entry for the NPG original reads:

"Evidently a self portrait of 1765-70, previously identified as Wright of Derby. A copy was given to Derby Museum and Art Gallery by W. Wright Bemrose, a direct descendant of Wright of Derby [2]. If the sitter was an artist closely connected with Wright c.1765-70, likely candidates would be Richard Hurlston or William Tate, whose features, let alone their work, remain obscure." Peter Perez Burdett is another candidate.

I can't easily get from the sitter here to the one in the Prague picture. I still think the NPG picture is by Wright! Hopefully it can one day be cleaned.