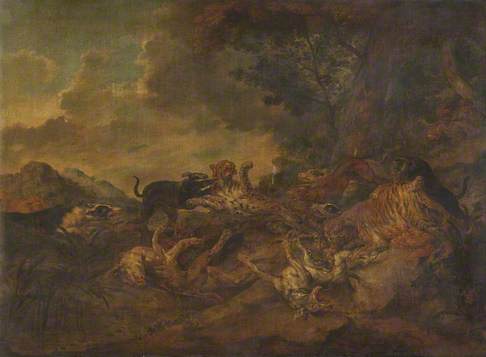 The online BBC News piece of 11th February 2017 on Art UK (http://www.bbc.co.uk/news/uk-england-38340015) included this as a notable example of an 'unknown artist', but can someone hazard a 'school', and rough date?

It was presented in 1922 by Sir Reginald Arthur Tatton (1857–1926) apparently from Cuerndon Hall, near Preston, Lancs, which he inherited in 1906 from his uncle Thomas Parker, in whose family it had been since constructed in 1717 (see https://en.wikipedia.org/wiki/Cuerden_Hall). They moved in about 1718 from Extwhistle Hall, which they had held since the 16th century, though the picture is presumably late 17th C at earliest.

The collection comments: ‘The painting is attributed to Follower of Frans Snyders (1579-1657) in Astley Hall's records and it's on a fairly modern label verso. This label has the full title as "Two Tigers with huntsmen" while an older label titles the painting as "Two hunters watching a pack of hounds attack two tigers". Though one of the tigers looks more like a leopard.

Astley Hall and its contents were gifted to Chorley Corporation in 1922 by Reginald Tatton. The painting is recorded in a transfer inventory as being part of the contents at that point and hung in the dining room. There is no evidence the painting had previously been at Cuerden Hall where Tatton lived (he inherited Astley Hall from his uncle but never lived there).

You are, of course, welcome to take this discussion public to get a wider opinion on the artist.’

This discussion is now closed. The artist of this painting was updated from ‘unknown’ to ‘follower of Frans Snyders’ in 2017, with the painting present. The collection acknowledges suggestions that this painting has many similar attributes to those by Paul de Vos, but until the work has been viewed by someone who can verify this, they would prefer to keep the existing attribution.

The leopard sems remarkably similar to the one in the "leopard Hunt" by Paul de Vos and Jan Wildens from the Hermitage: https://commons.wikimedia.org/wiki/File:Paul_de_Vos_-_The_Leopard_Hunt_-_WGA25326.jpg

And the tiger is the same as the one in http://carltonhobbsprovenance.com/paintings/paintings-of-tigers-by-paul-de-vos

So this work is either by or after Paul de Vos, I would say

Images of the tigers added

Finally, the wounded or dead dog in the left front can be seen in reverse in the right front in a Deer Hunt from De Vos and Wildens from the Hermitage https://www.hermitagemuseum.org/wps/portal/hermitage/digital-collection/01.+Paintings/48293/?lng=nl

Hondius did similar subjects of which this is the closest on Art UK:

The parallel pose of the dog at lower right is interesting but I suspect one could find others similar by various hands, and overall the Hondius selection on the web suggests more tightly planned groupings, a more polished finish with denser colour, and fondness for boars and bears at bay, but not 'big cats'. The condition of the Astley Hall canvas doesn't help in that it looks like it needs a clean, but for a picture less than a metre wide it also presents a more expansive landscape prospect than Hondius seems to: on first sight I thought it much biggger than it is.

Does the attached help? It might jog memories of an artist's other works in better seeing conditions. It is NOT intended as a guess at what the original was like.

... The photograph had been better taken. The blue casts in some areas suggest that reflected/refracted light was present.

... A uniform layer of varnish discolouration had been removed.

This is a simple digital colour correction, changing overall balances and no detail. It generally works by identifying what it thinks should be whites (e.g. the chests of dog and tiger) and assuming that the colour cast is the same throughout.

This shot of the head of the leopard and back of the painting were taken on my mobile in Astley Hall's very cramped store room, so apologies for their poor quality, but perhaps they will be of some help.

From the close up added by Amanda it strikes me that this is a not particularly good copy of a possibly lost composition by Snyders or de Vos. The date I would reckon to be early 18th century. It is certainly not Hondius. The repeat of the motif of the nursing tiger, seems very clumsy in the Astley painting (amongst other details). To be more certain of a date the painting would need to be seen.

Thanks Toby: good to have input from someone who sees a lot of these. If it is an 'after' then it would help to get a better consensus on after who: the de Vos suggestion is at least backed by detail parallels which I can't find from scanning Snyders on the web, but is that just being too simplistic?

Toby I am sure is right , but the Snyders/de Vos problem is very difficult. The Hunterian Art Gallery owns a fine still life with dead deer which was attributed to Snyders in the mid 18th century, but which is closely related to a painting in the Prado bearing De Vos' name on its face [but not a signature] . On the grounds of that relationship I changed the label to de Vos, particularly as there was no mention of it in the Snyders catalogue raisonne. However, my successor,Peter Black, who is much more conversant with Flemish 17th century painting, has reverted to the Snyders attribution. Both artists drew a lot and we might find clues in the drawings - but in drawings too I do not think that it is easy to establish who did what. Snyders, the far bigger name, tends to be favoured for attributions. The two artists were very close to each other and as far as I know there have been very few publications on de Vos.

Is this 'identify the artist' discussion going any further at present? There is an existing 'follower of Frans Snyders' attribution, so far accidentally not on Art UK. There is a fairly persuasive suggestion, based on parallels, that it might equally be 'follower of Paul de Vos', though we are also told that choosing between the two can be problematic.

Whoever it is 'after'or 'follower of' there is also a view that its likely date is 18th century.

After taking advice we recommend that the painting be kept as 'Follower of Snyders' However, a suggested date would be welcome.

Toby, above, has suggested 'early 18th century'. Are there other suggestions. Snyders died in 1657, so there is space for 'late-17th', but I have no idea.

The period of this picture, which is much smaller than many others with this kind of subject, is difficult to judge because of the heavily discoloured varnish with which it is covered. The very animated style, however, looks much more like Paul de Vos than Snyders, and the manner of painting and general colour scheme not at all like Hondius. It may well be a reduced copy.

While this is 'not my game' in all senses of that word I thought the parallels suggested some time ago by Francis Mouton were rather convincing re: de Vos. Ultimately it is up to the collection but -having originaly raised the fact that we should be able to do better than 'unknown artist' and no date, could this be wound up-at least for the time being- with a recommendation/provisional decision on both ?

Astley Hall acknowledges that the painting is greatly discoloured which makes any assessment from a digital image difficult. The existing attribution of 'Follower of Snyders' was given by a Bonham's expert during a valuation assessment and was done with the painting present. The attribution to Paul de Vos has obvious merit and Astley Hall staff would welcome a visit, from a specialist in Flemish art of the 17th Century, to view the painting and conduct further research to see if it can be verified as a genuine work by the artist. Until then, it is preferred to keep the existing, broader attribution and date to c.1700.

The existing attribution on Art UK is 'unknown artist', so if the Hall is prepared to accept 'follower of Franz Snyders' that's a start;but perhaps with a brief note by way of 'more information' that (as per Francis Mouton's comments) there are some de Vos parallels that suggest him as a possible alternative, though this needs further investigation. That's really where we currently are.

When considering the painter's identity, is there any merit in focusing on the attire of the two huntsmen in this scene? They both appear to be wearing turbans, perhaps suggesting the action is taking place in Bengal (which could justify a large tiger being present), or some other continental Indian region. The lead huntsman is blowing a hunting horn, the style of which might also be determined to a particular time period. The most obvious question, however, is did Snyders or de Vos ever feature such incidental characters in their dog-hunting paintings? Snyders certainly featured people in his interior paintings, usually preparing some animal for the cooking pot, but did he featuring them in this more discreet setting as seen in this painting. I can only find a very few in hunting works by Snyders but several in works by de Vos and Wildens, as per the following example, featuring another horn-blowing huntsman:

The suggestion might help in deciding which "after" to choose.

I agree with Tim Llewellyn that this is much more in the style of de Vos than Snyders. It woild be best described as after or by a follower of Paul de Vos.

23 April 2019
This information has been passed to the Collections Officer at Astley Hall Museum and Art Gallery.

Thank you to Astley Hall Museum and Art Gallery for their email. The collection acknowledges the suggestion that this painting may be 'after' or 'follower of' Paul de Vos. Their difficulty with accepting this lies with the fact that this assessment has been made without the painting present; by contrast, the attribution to 'Follower of Frans Snyders' was made with the painting present and the label on the back was written by someone who had seen the painting. Until the work can be viewed by someone who could verify its greater proximity to the work of Paul de Vos, the collection would prefer to keep the existing attribution.

Description
Two hunters watching a pack of hounds attack two tigers in a mountainous landscape. This work is displayed in a carved wooden frame.