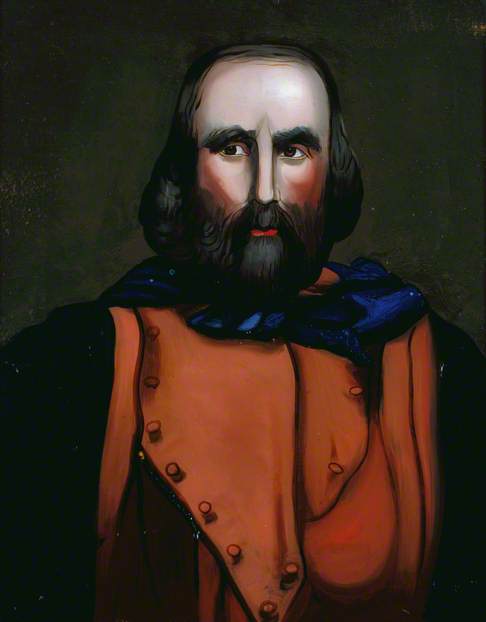 Can anyone suggest the date and author of this and several other portraits of Garibaldi on glass in British collections?

Garibaldi was in London for three weeks as a guest of the Duke of Sutherland in April 1864. This may have inspired the making of these images. Many portraits of Garibaldi were made at the time of this visit – no doubt a specialist would be able to say much more about these ones.

Glasgow Museums also owns another portrait on glass of Lord Palmerston attributed to A. Struthers and assigned the date 1895, some considerable time after Palmerston's death: http://artuk.org/discover/artworks/lord-palmerston-17841865-86182

Are these works all from the same studio? Who was A. Struthers?

The date of what looks like a treacle print or 'hinterglasmalerei'[it woudl be intersetibng to know whether the 'oil' is on the front of the glass or behind] and probably after a photograph (or a print) looks more like the time of Garibaldi's three week visit to Tynemouth (Newcastle) in March April 1854 - he looks more youthful and in the correct costume with a manageable (not completely white) beard - red jacket with buttons and chain (but no star) and no hat. His portrait by Watts, seen from the same angle, sitting of 1864 looks of an older man.

The paint is on the reverse of the two we have of Garibaldi and Prince of Wales.

There was a jeweller's called A. Struthers at 54 Leith Street, Edinburgh. I found a mourning band originating from 1888 for sale on a website ' artofmourning.com.' This is very close to the Palmerston treacle glass print. Strong possibility that this is the A Struthers for whom you are looking?

The three Garibaldi portraits at the Whitaker, Glasgow and Southampton are clearly all from the same workshop and from the same source, very similar to the cartes de visite by Z. Bioni in the NPG of 1862. That in Stirling Smith is different but the clothing close to a wood engraving on the Alamy picture library website.

Glasgow’s Palmerston is also close to cartes de visite in the NPG by Mayal dated 1862 (Coincidentally Palmerston of course met Garibaldi in London in 1864). It would be interesting to know where the supposed date of 1895 and the attribution to A. Struthers come from.

The Stirling Smith’s painting of Edward VII when Prince of Wales can be dated to the same period, the early 1860s, judging by his age. Cyfarthfa Castle Museum’s ‘Portrait of a woman in uniform’ (!) is and almost identical portrait of a man in Sunderland, from the same workshop, are surely also of the Prince of Wales: the hairstyle and necktie with stud are very similar in many photos of him in the 1860s.

Note that all are of similar sizes, some identical. So we probably have a mass-producer of glass paintings making images of popular figures in the 1860s, derived from images already in circulation.

The reason for suggesting Oscar Wilde as the subject of the portraits in Merthyr Tydfil and Sunderland was the resemblance to photographs of him in 1882 by Napoleon Sarony and others see http:/www.oscarwildeinamerica.org/Sarony

but Andrew's suggestions make better sense. One wonders if the 1895 associated with the Palmerston portrait is a mistake for 1865, the year of Palmerston's death. Also could A Struthers could have been an owner rather than the artist?

I support the idea that the Welsh portrait is the prince of Wales. It has been suggested by my director that these portraits may have been done for the Italian community, specifically for Italian ice cream parlours etc. Has anyone any suggestion that their portraits came from this source.

From 1860 onward there seems to have been a craze for portraits of Garibaldi.

There many other reverse glass examples supporting the production on a large scale:

Apart from perhaps the Roseberys example, all look to be by the same hand or studio.

Garibaldi and Prince of Wales were working class heroes because the prince was involved in Garibaldi's tour to Britain despite what Queen Victoria thought. Garibaldi was seen as a threat to the monarchy and aristocrats after his successful campaigns in Italy. He was also involved in promoting William Wallace in Scotland and along with other european radicals supported the effort to build a monument to Wallace at Stirling. This is why we believe these images were made for supporters of Garibaldi, Italians and working class people, therefore possibly from Italian establishments.

Another copy of Glasgow's portrait of Garibaldi was on sale earlier in the year in the USA, evidence that these were mass-produced and widely distrubuted https://www.ebth.com/items/5348783-reverse-portrait-painting-on-glass-of-giuseppe-garibaldi

These reverse-painting images of Giuseppe Garibaldi could all be by the American folk painter William Matthew Prior (1806 - 1873).

On page 19 of their "Folk Art in American Life' (Viking Studio Books, 1995), Robert Charles Bishop, Henry Niemann, Patricia Coblentz remark that "William Matthew Prior became well-known in his later years for his work in this medium (reverse-painting on glass). Prior is known to have done reverse-glass portraits of George and Martha Washington, Lafayette, and Garibaldi, in addition to Abraham Lincoln; they were handsome as well as appealing to the American public's enthusiasm for depictions of political heroes."

Biographical details of Prior's life can be seen here:

In late 2012 and early 2013, the Fenimore Art Museum and then the American Folk Art Museum hosted an exhibition of his work, at which time a publication was produced entitled, ARTIST AND VISIONARY: WILLIAM MATTHEW PRIOR REVEALED, and written by Jacquelyn & Gwendolyn Dubois Shaw. It would be worth sending the images under scrutiny here for their consideration.

Attached is a composite of images for style comparison, the two in the middle being know works by Prior of George and Martha Washington.

There may have been many artists in the mid-1850s and 1860s who were producing reverse-paintings on glass, but Prior is certainly with considering as the creator of the Garibaldi paintings dotted around the UK. How the arrived in the UK from America would be a question to be considered on another day.

I hope this information does not come too late. The attribution of A. Struthers as artist as well as the date 1890 on Glasgow Museum's portrait of Lord Palmerston (acc. no. OG.1948.103.a) are both in fact a mistake.

The glass portrait of Lord Palmerston was gifted to Glasgow Museums in 1948 by a gentleman who also gave us a watercolour painting by 'A Struthers', dated 1890. The way information was recorded in our old Paintings register was a bit unclear and when it was transfered to our electronic database, the attribution to A Struthers and the date 1890 were by mistake associated with both the watercolour and the glass portrait. We managed to find the original record from 1948 when the glass portrait was accessioned - it says only "Oil Portrait. Elderly gentleman of the Victorian Era". There is no evidence either on the painting itself or anywhere in our records that would suggest anything about the maker or the date. I have therefore updated the information in our database to "Artist Unknown, 19th century, British".

Are you ending this discussion by way of your database update?

another painting which might belong in this group, although described as on board [I suspect that this is simply the backboard] is in Ceridigion Museum described as Portrait of a man (said to be John Wesley).

We have amended our records. The portrait of Lord Palmerston in Glasgow Museums' collection is now listed as by an unknown artist. This change will be visible on Art UK in due course.

But can anything else be found about these paintings on glass?

Can anything be gleaned about the connections between the men represented? Is there any evidence that some of them were once together in the same building?

Garibaldi and the Prince of Wales were both prominent freemasons. Was Palmerston a freemason?

There is a general Wiki article on reverse glass-painting -https://en.wikipedia.org/wiki/Reverse_glass_painting- which seems pretty varied in form though groups of portraits of this 'Garibaldi' type (or other single sitters) don't seem common. Rather more common is the related 19th-c. form in which prints were stuck on glass, the paper scraped away and the outline then painted, and then viewed from the other side: the late Prof. Lesley Le Quesne - a surgeon with Nelsonic interests - did a useful book on 'Nelson Commemorated in Glass Pictures' (Antique Collectors Club 2001), mainly of this sort, based on his own large collection of them.

Were the ultimate source of these images low cost lithographs printed for the popular market? Have any of the backs been examined for evidence of the paint being applied over prints?

It is nearly two years since the last comments were received (from Martin Hopkinson). Does anyone have any further contribution to make? Any thoughts would be most helpful. Thank you.

We are still awaiting evidence that the backs of the glass have been examined. Can the owners be encouraged to look at them, please?

Thank you to The Stirling Smith Art Gallery & Museum for these photographs of the back of this painting. There is no sign of paper on the back, just paint on the glass.

Medium and Support
oil on glass