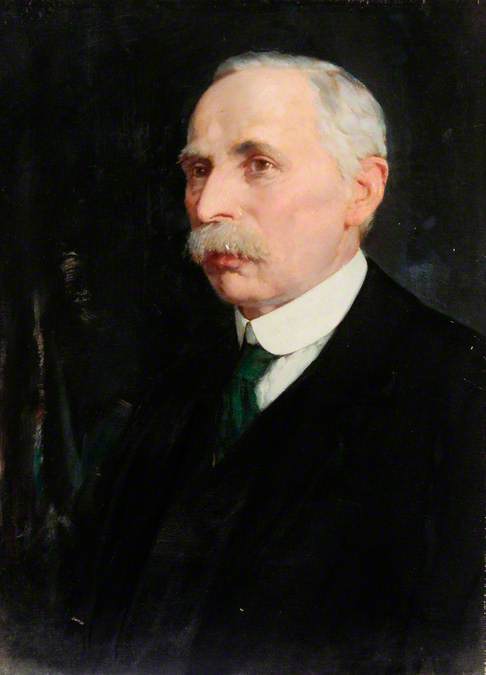 Following research in the Tyne & Wear Archives and Museums I have found photographs in obituaries of Richard George Hatton, Professor of Fine Art and Director of the King Edward VII Art School, of Armstrong College, Durham University, in the Daily Chronicle and Daily Journal of February 24th 1926 and which very closely resemble this portrait. Subsequently, on inspecting the back of the portrait in directed light the words "Prof Hatton" can be faintly read on the frame. There does not appear to be a signature on the portrait but there are records in the minutes of the Art Committee for the Art School (held in the Newcastle University Archives in their Special Collections, which record the possible existence of two portraits of Professor Hatton. On 27 July 1926 the minutes record the decision “that in the future the gallery be renamed ‘The Hatton Room’ and that Mr Bullock be asked to paint a portrait of the late Professor Hatton to hang in this room.” Ralph Bullock was the Master of Painting under Hatton and responsible for several portraits of professors in the Hatton Gallery and Newcastle University Collections. The other, later record of 30 October 1933 states that "Mr Temperley announced that he wished to present to the School of Art a portrait of the late Professor Hatton, by AK Lawrence, which had been lent to the School for some time."

It is quite possible therefore that the portrait in the Hatton Gallery could be by either of these artists. If by Bullock it appears to have been painted from a photograph similar to those reproduced in Hatton's obituary. If by A K Lawrence this could also be the case, or it could have been painted from a live sitting, at an earlier time, as Lawrence studied under Hatton before the First World War. Further investigations will be needed to identify, if possible, the artist.

The Collection has commented: [in reply to their collection online entry note: ‘The artist of the portrait remains uncertain, but Art School Committee minutes held within Newcastle University Special Collections suggest two possible contenders. One record reveals a posthumous portrait may have been commissioned from the artist Ralph Bullock, while the other notes that the gallery was offered an existing portrait of Hatton by Alfred Kingsley Lawrence, who had studied under Professor Hatton.] ‘We think Bullock is more likely, as handling of facial details seems quite similar to two other portraits painted by him https://bit.ly/3671Vv5 and https://bit.ly/3jxccc5. However, I don’t think we can rule out Lawrence https://bit.ly/3yeyALl without further discussion as this also seems possible. '

The quality of execution of the portrait of Professor Hatton points, I believe, to A K Lawrence rather than to Ralph Bullock. There are several examples of portraits by AKL on Art UK which I think, on comparison, support that view.

I suspect that the artist was Ralph Bullock. An article in the 'Newcastle Daily Chronicle' of December 17, 1927, mentions, in the discussion of oil paintings in the Northern Counties Artists' Exhibition, his "excellent portrait of the late and revered Professor Hatton". The timing seems correct for a commission that would have been undertaken after July 1926.

An article in the 'Shields Daily News' of December 16, 1927, mentions a "drawing of the late Professor Hatton" by Kingsley Lawrence that was lent to Armstrong College by Robert Temperley. This is likely the work mentioned in the document from 1933.

The only image of Professor Hatton that I could find in an obituary (in the 'Newcastle Evening Chronicle' of February 20, 1926) is quite dark and would predate the painting.

Description
The sitter was Professor of Fine Art and Director of the King Edward VII Art School, of Armstrong College.