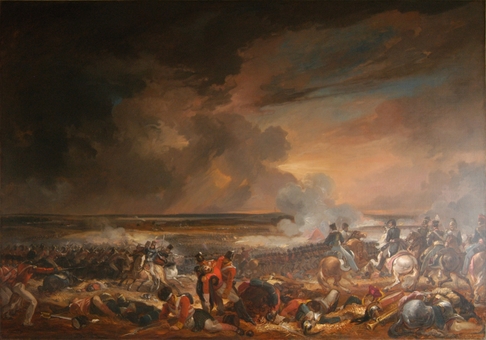 Is it certain that the initial of the artist is J or is it really S? This picture could well have be painted in the lifetime of Samuel Drummond (1765-1844), best known for his paintings of the Death of Nelson. S. Drummond exhibited 'Field at Waterloo’ at the Royal Academy in 1836. (no. 309) http://bit.ly/3ag7IRY

Drummond was one of thirteen artists who submitted paintings of the Peninsula campaign and Waterloo to the British Institution competition in 1815. His painting depicted the evening of the battle. This scene from Bradford M&G does suggest evening although the battle is still raging. The RA catalogue description of the 1836 painting suggests a composition similar to John Heaviside Clark's 1817 picture: https://repository.library.brown.edu/studio/item/bdr:238423/

I don't think that this painting is likely to be Samuel Drummond's 'Field of Waterloo', 1836, as the quotation next to that work in the RA catalogue refers to a wife finding the bleeding body of her husband on the battlefield, which closely fits the subject of a painting sold as 'After Waterloo' by Sammuel Drummond, oil on board, 55 x 67 cm - perhaps a study or copy rather than the exhibited painting. https://www.invaluable.com/auction-lot/samuel-drummond-808-c-a64408ab15

Samuel Drummond's 1816 painting was entitled: General advance of the British lines, driving in the broken columns of the French army, after Buonaparte’s last desperate effort to break through our right centre with his Imperial guards … Painted from sketches made on the ground a few days after the Action; and from information from the Duke of Wellington and Marquis of Anglesea’s Staffs, Royal Engineer department, &c &c &c”
See: https://chronicle250.com/1816#footnote_chapter__text-6

It looks to me that this painting depicts a charge by the Household Cavalry.Bottom Left.I may be wrong.Anyone else agree??
If so this could depict the battle of Genappe two days before Waterloo.
At Waterloo the Household Cavalry charged at midday towards la Haye Sainte.But I see no buildings in this painting-just what look like French Cavalry in the centre of the painting.

Gemappe was a comparatively minor cavalry action on the retreat from Quatre Bras and did not involve troops on the scale shown here. This canvas clearly shows the massed advance of Wellington's troop at the climax of Waterloo with lines of infantry at the centre and cavalry on the left. At the point of focus of the picture are Wellington and his staff with Lord Uxbridge to the left, about follow the troops off the ridge into the valley, where Uxbridge was hit, supposedly by one of the last salvos of French artillery, his shattered right leg -suitably highlighted here-subsequently being amputated. As for 'information from Wellington's staff', the Duke's horse 'Copenhagen' was a dark chestnut not a grey. I think they would have got that right.

The trouble with this picture is that the varnish has gone off and combined with the grime of ages one cannot see detail and especially the colours of the uniforms.
If this is the charge of the Heavy Unified Brigade at Waterloo(Towards la Haye Sainte), we can see either the Household Cavalry or The Inneskillins-indicated by what appear to be light coloured trousers.After they were practically destroyed they took no further part in the battle.The Light Brigade was not deployed in the battle,but kept in reserve.Wellington was cautious with his cavalry ,especially in the muddy conditions on the day.

There is a building on the centre right. From its position on the British right, its location below the height of the ridge and it being on fire strongly suggests it is Hougoumont Chateau/Farm. The fire was started by shell-fire some time after 3pm when Napoleon lost patience with his brother who commanded a whole army Corps against a regimental-strength defence. The amount of smoke that can be seen suggests that this was 4pm at the earliest. Wellington later said that the success of the battle hinged on the gallant closing of the chateau gates in the face of overwhelming odds.

Yes Keith-I see what looks like flame and smoke. The Heavy Brigade charged at 2.45pm-either side of La Haye Sainte.Losses were half the horses and 60% of the Troopers. Hougoumont was off to the right and in front of Haye Sainte as we see it .So that could be Hougoumont on fire with a bit of fore-shortening. The Dutch -Belgian Cavalry charged a bit later to the left of Haye Sainte to support the remnants of the Heavy Brigade, but this is not them-wrong coloured uniforms.