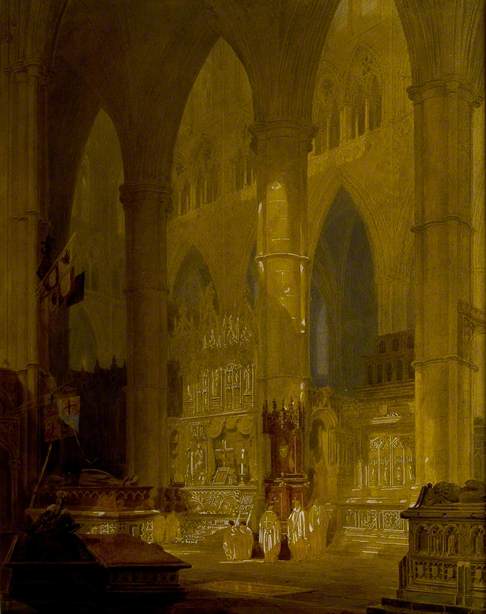 I know that the discussion on this work was recently closed - alas! https://bit.ly/3ANC9dI I had hoped to add my two cents. Just in case the discussion is reopened. I wonder if this could be the work of James Henry Nixon (1802-1857) painter on glass and watercolourist. The subject, the media and the suggested dates all support this idea. J H Nixon, who lived in London, must have visited Westminster Abbey often during the 1840's, while working with his partner Thomas Ward (Ward & Nixon) on the great marigold window which they produced and which was installed in the Abbey in 1848. Subsequently, decades later, it was removed. The gouache was the first thing that brought him to mind (used in his Eglinton Tournament watercolours https://bit.ly/3hujeNo), and his confident ease with large perspective and architectural detail (see the Primrose Hill engraving of 1837 - for opening of the new train tunnel). Finally, the figures in the lower centre, are somehow "place holders" - not very detailed, and bring to mind the figures in (again) the Eglinton Tournament watercolours which, for all their detail, are less important than the overall flow and panorama of the scenes. J H Nixon's Queen Victoria's Procession to the Guildhall, 9 November 1837 https://bit.ly/3xxt6eS demonstrates both large perspective with clear architectural details, and strikingly demonstrates the effect of light from above; both are features of Westminster Abbey by the unknown artist.

I've been reviewing the previous discussion about this watercolour, and found a question raised by Kieran Owens on 25/05/2020:

It is interesting to note that Ainmiller also paints the view from St. Edmund’s Chapel with the wooden screen missing. Was there some period in the Abbey’s history, in the early to mid-1800s, when it was removed, to be replaced at some later date? Or is it a case of both painters employing artistic licence?

The answer is yes, the wooden screen was missing in 1848, as described below in the Lincolnshire Chronicle - Friday 23 June 1848 (BNA):

"WESTMINSTER ABBEY - The Dean and Chapter of Westminster deserve very great praise for the recent alterations in the Abbey. It is hardly like the same place. The north transept is open to the south and the sound to the north, and when you stand in Poet’s corner, by the graves of Garrick and Johnson, and the monuments of Shakspear and Gay, you can see Flaxman’s Lord Mansfield, Bacon’s Lord Chatham, and Chantry’s statue of George Canning, in the transept on the other side of the choir. Formerly you could see nothing more than an incongruous screen, very little better than an ornamental boarding. Then the old stalls and seats have been removed; new canopies erected, in capital taste, carrying on the style and character of the Aymer de Valinee monument; the organ placed on one side, and the great west window made visible from the choir. By these alterations one thousand additional seats have been obtained. But this is not all. The windows in the south transept and Poet's-corner have been filled with stained glass, in an early and good style by Messrs. Ward and Nixon. The great upper light is a marigold window, of exquisite shape; beneath is an open arcade, with three double lights, and beneath that is a row of six lights. All are filled with stained glass, and each compartment is complete in itself. The colours are rich, the rubies and blues wonderfully so. The designs too, are good."
---------
This confirms at least that James Henry Nixon's work on the marigold window at the Abbey (with his partner Thomas Ward) coincided with the removal of the "incongruous screen", in 1848. It doesn't prove that J H Nixon was the artist of course, but I think it supports the idea.

I don't know what the screen currently in place looks like - perhaps someone who knows can say if the description fits.

An article (attached) in the March 5, 1842, edition of ‘John Bull’ mentions Nixon’s ‘painting in fresco’ of a stained glass window that was being created for Westminster Abbey. While it wouldn’t be the Art UK work being discussed here, it does show that Nixon created watercolours of Westminster Abbey.

﻿There is an illustration of Westminster Abbey on page 390 of the ‘Illustrated London News’ of June 17, 1848, that is very similar in scale (and has some nearly identical elements) to this work. I have attached a composite. The article itself is spread over three pages (attached) and includes a discussion (at the bottom of page 390) of the stained glass for Westminster Abbey that was executed by Ward and Nixon. That wording is similar to the text posted by Jill.