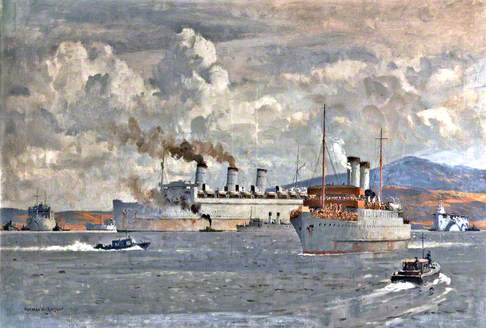 I have been researching my father's war service. One of the ships on which he sailed was the auxiliary aircraft carrier HMS ‘Vindex’. During part of that research I read ‘Escort Carrier’ by Chris Pooley, which describes an incident during which the ‘Vindex’ slipped its anchor and rammed the ‘Queen Mary’ in the Clyde Estuary just after returning from the USA with Churchill on board.

I noticed in the background at the far right of the picture an escort carrier which may have been HMS ‘Vindex’. Can anyone confirm that the carrier portrayed is indeed the ‘Vindex’?

If the three stacker is Queen Mary, then it is the right place. I quote: After the last Russian Convoy of World War 2 we reached Scapa Flo on VE Day, so we took on more fuel and went straight down to our anchorage at Greenoch — next to the QUEEN MARY. Regards

Thank you, Rick. The quoted source may say Greenoch [sic] (or may be a typo?). The town on the Clyde is Greenock.

Can we get an enlargemnt of that part of the picture (or a high-res copy of the whole thing)?

There are photographs, for comparison, of Vindex on Wikimedia Commons:

Not HMS Vindex- the superstructure above the flight deck is wrong.Although the image is small and impressionistic Norman Wilkinson really knew his stuff WWII ship wise - so if it is a R.N. escort carrier my guess is that it looks very like a Bogue class carrier- we had 34 of them.

Maybe this will work:

By the way, the link in my immediately preceding comment was to a different ship with the same name from 1915.

That last attempt worked, and it shows the Vindex in 1945.

Rick Smallman's quote is from the BBC peoples war archive,,,, https://www.bbc.co.uk/history/ww2peopleswar/stories/50/a5846150.shtml
If this is supposed to be the Clyde on VE day then Norman Wilkinson has got the relative size of the superstructure wrong- as you can see from Jacinto's eventual successful posting ,Vindex's superstructure above the flight deck was quite small.
Here is a page on Vindex with another photo showing the small superstructure.
https://uboat.net/allies/warships/ship/3298.html

The NMM warship-identification specialist says that it would be useful to see a blow-up of the carrier in the painting and others comparable of Vindex than immediately obvious on the internet. He says Wilkinson is usually accurate enough to be clear what is intended, agrees the superstructure looks too big and has never seen any photographs of Vindex with the camouflage scheme Wilkinson shows. The twin funnel vessel in the foreground seems to be a Clyde ferry but not one he (or I ) can identify.

Peter-- the vessel in the foreground has loads of soldiers on deck-another similar vessel is going alongside the Queen Mary.Obviously painting depicts unloading of probably american soldiers from the QM..

Thanks: hadn't spotted that. My colleague corrects me in saying it's a ferry though not necessarily one built to work on the Clyde, but perhaps there for war reasons. If the collection record has any note on its identity perhaps they could say so (?). I assume they don't on the carrier or we might have heard by now.

Hi I'm Rebecca Smith, one of the curators at the Merseyside Maritime Museum. Many thanks for posting the painting, one of our favourites. Thank you for the comments and information which have been interesting to read and insightful. The painting is currently on display in our Battle of Atlantic gallery, please do visit.We also have a new gallery, Life on Board, opening the end of March 2020. Thank you again.

Rebecca- just a bit extra-- The Americans liked dazzle camoflage.They supplied us with a lot of lend lease escort carriers.These seem to have come ready painted.Here is a link to another one-note paint job and island size--HMS Attacker
https://en.wikipedia.org/wiki/HMS_Attacker_{LPARENTHESES} D02)

This link may work better, Louis:

Hiya Phillip, I am trying to find information out about H.M.S vindex as my great grandad was the pt instructor, officer and photography for the vindex, I was just wondering if it’s alright if you could
Email me and see if you have anymore information about the vindex or anyone who has some information about it ?

The Birmingham Daily Post, of Saturday 6th November 1943, reported that, while President of the Royal Institute of Painters in Water Colours, Wilkinson showed a work at the Institute's exhibition at the Royal Academy titled "Queen Mary - Entering a Northern Port". As the medium in which this discussion's portrait has been painted is in doubt, could this be that 1943 painting? There are many artists (e.g. Sir Frederic William Burton) whose watercolours were painted in such a way as to appear like oils. If this is in oils, perhaps Wilkinson's Institute exhibition version was a watercolour study.

Also, the aircraft carrier on the right would appear to be painted in the sot of dazzle pattern that Wilkinson himself was credited as inventing for the camouflaging of US and UK war ships as early as 1917:

"portrait" above should really have been "work"...

Try this book if you haven't already done so: its a principal source for the Wikipedia entry on the ship, and probably easily found second-hand.

This reminds me to prompt for a hi-res detail of the ship that may be 'Vindex' in the back far right here, so we can try and wind-up on the original question asked.