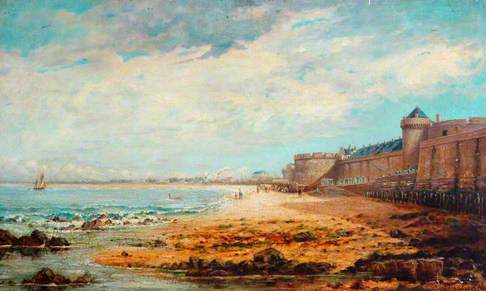 This appears to be by Armand Félicien Pinel, a painter of landscape and harbour scenes, who first exhibited at the Salon in 1880 and died in 1892. There is an entry in Benezit. Could we find out more about him?

The attached closeup image of the signature and date [18]85, courtesy of the collection, shows the picture’s colours more faithfully. The curator has confirmed that Art UK’s image is too warm, resulting in a vividness that is not in the original.

The possible artist and general appearance suggest it is, perhaps, France. Could it be St Malo?

This discussion is now closed. ‘Seascape’ has been attributed to Armand Félicien Pinel (1820–1892/94) and a biography of the artist has been provided. This is the only known example of Pinel’s work in a UK public collection. The location has been identified as the Bastion Fort La Reine and beach at Saint-Malo, looking east, but in the absence of bibliographical evidence the title will remain as it is.

Thank you to everyone who contributed to the discussion. To anyone viewing it for the first time, please see below for all the comments that led to this conclusion.

This is without doubt St Malo

A background closeup shows a windmill, a factory belching smoke and, between them, what appear to be masts and rigging, with more visible to the right of the very tall building.

Thanks very much for the picture, Jay! We have our location.

Et voila! - thanks for the confirmation: perhaps we can leave this running a bit to see if anyone can come up with a date of birth or other information on Pinel: Benezit does give his place of birth but I failed to note it.

Pinel was I think born 30th June 1820 at Chauny in the Aisne Departement, son of Jean Felix Pinel and Adélaïde Dupressoir. If this is him he married Jean Petit (yes I know but sic!!!) 19th July 1849 in the Sainte-Madelaine district or church in Paris. He was living in the Rue St. Honore. In the 1890 electorals he is living in 90 Boulevarde St Germain.

Hope its right and helps.

Thank you Charles: that sounds right. Chauny is mentioned on the Dorotheum auction site and was my half-memory from Benezit though without immediate access to check.

While its a collection decision how to retitle this from the unhelpful 'Seascape', it shows the Bastion Fort La Reine, St Malo, looking east; the Rue du Chateau Gaillard runs behind it inside the wall.

Benezit's short entry sates that Pinel was born in Chauny (Aisne) (about 130 km north east of Paris). He was a student of Sauvageot (probably Charles-Théodore; 1826 - 1883) and of Roulet/Roullet, and his debut showing at the Paris Salon was in 1880.

Pinel was born on the 9th June 1820 at Chauny, the son of Jean Felix Pinel and Adelaide Dupressoir (? spelling). On the 19th July 1849, in the parish of St. Madelaine, Paris, while living at 400, rue St. Honoré, he married Jean Petit. During the 1880s he exhibited at the Paris Salon and elsewhere from 108, rue de Rivoli, and, according to the city's electoral roll, in 1891 he was living at 90, Boulevard St. Germain, Paris.

Ancestry returns a search result that suggests that Pinel died at 29, rue Moulin des Prés, Paris (13th) on the 22nd March 1894, (rather than 1892) but this could be a different person.

Two other works by him, one with a very clear signature, can be seen here:

Oh dear, it appears that Charles submitted his details while I was preparing mine. No harm in duplicating it, I hope, but Marion, please feel free to delete my submission, or at least the duplicate parts.

Perhaps the Art UK image is misleading, but I am not convinced its style matches that of known work by Pinel, which seems more "modern" or impressionistic. What is the "J Pinet" attribution based on? Can we get a good close-up of the signature at lower right? We could still be looking at the work of a different artist.

The cursive signature detail from the Hepworth painting is attached at the top with a detail (via the Dorotheum link also at the top) of that in capitals on the 'Pont des Arts' painting to which Kieran provided the Wiki commons image link: i.e. its the same Dorotheum lot.

It would be good to find another Pinel cursive signature ( be it on a painting or a document) but Marion and I have discussed the issue of colour rather than style and we both think it is likely to be Pinel, the repro being (by collection admission) too red/warm: 'J Pinet' appears to be an old recording mistake with no discoverable artist suiting the date. The subject is certainly OK for Pinel and as the background detail Marion provided shows, it's in fact a rather better picture than first impression might suggest. The collection of course can take its own view, but its a case for at least 'attributed to' on current evidence.

Thank you, Pieter. The signature on our picture is A Pinel, so obviously the "J Pinet" was a red herring. The color in the Art UK image must be wrong, then, which was part of my problem. I agree that, unless there is another known A Pinel, this picture can be attributed to Armand Félicien Pinel.

Attached is a composite comparison between the 1878 and the 1885 versions of Pinel's signature.

Could the collection now express a view? Though we are not overwhelmed with supporting evidence I think there is enough to put Pinel's name firmly on this, but if they prefer to be more cautious and just say 'attributed to' its their choice. The original issue I raised, and which only extended to artist identity when it became a public discussion, was 'where does it show' and that is now resolved: so perhaps I can also suggest 'St Malo; the ramparts and beach, looking east' as a possible new title though more exact details are given above. Again, it's for collection decision.

Here is a draft summary on Pinel, from what has been supplied above: it is certainly odd that an artist of whom there seems little obvious trace lived in what have always been the Parisian equivalents of London's Mayfair and St James's, including probably marrying in La Madeleine itself. It sounds more like family (or wife's family) money than artistic income. The only slightly odd address given those before -if he died in 1894 not 1892 - is the Rue du Moulin des Pres, though it was also a respectable one:

Pinel was born on 9 June 1820 in Chauny, Aisne (about 130 km north-east of Paris), the son of Jean Félix Pinel and Adélaïde Dupressoir. He was a student of Charles-Théodore Sauvageot (1826–83) and – according to Bénézit – of ‘Roulet’ (identity uncertain). Pinel was a painter of landscapes, city views and harbour scenes, based in Paris, where on 19 June 1849, while living at 400, Rue St. Honoré, he married Jean [sic] Petit in the parish of Sainte Madeleine. From this and the equally fashionable addresses of his later life he appears to have been fairly prosperous, though whether from his art or family circumstance is unknown: for although he was 60 when he first exhibited at the Salon in 1880 it was from 108, Rue de Rivoli, and the 1891 electoral roll shows him at 90 Boulevard St Germain. His death is usually given as in 1892 but online record suggests it may have occurred on 22 March 1894 at 29, rue Moulin des Prés, (Paris 13). There is little record of work by him in public holdings: a view of the ‘Port of Antwerp’ is in the Musée de Chambéry; another of the fortified walls and beach of St Malo (dated 1885) in the Hepworth Gallery, Wakefield, appears to be the only example in a UK collection.

Pieter, as you can see from the attached, the name of the second of Pinel's teachers is given in various exhibition catalogues and artist's directories as Roullet (as opposed to Benezit's Roulet).

Given that Pinel seems to have come to exhibiting his works at the Salon de Paris at a very late age, he could have been an older contemporary but still a pupil of the younger male French painter Marie Anatole Gaston Roullet (1847 - 1925), better know as Gaston Roullet:

There are similarities between this discussion's painting and many marine paintings by Roullet:

Roullet first exhibited at the Salon de Paris in 1874 and he and Pinel exhibited there throughout the 1880s.

Thanks Kieran. I had seen Gaston Roullet but you raise a good point. It may be that Pinel had some prior occupation that left him fairly well set up, if only as a son of relatively wealthy parents, and that he turned to painting fairly late. So far we've only seen examples dated from the mid 1870s. Can you add further specific dates and /or venues for his exhibiting in the 1880s?

And not that it is anything but a coincidence, but Gaston Roullet also painted St. Malo, as well as other coastal sites in Brittany:

Thanks for those: so far all we seem to have found are views in Paris, northern France and as far as Antwerp (as reported in Chambery by Benezit), without anything that bears a date before mid/late 1870s. While it's only drawing inferences until at least pre-1870s dated works turn up, I suspect Pinel's livelihood did not depend on art and that it only became a semi-professional occupation from a position of security in early middle age.

Hmmm... something seems to have disappeared here: essentially my further speculation that since Pinel was so much older than his teachers -especially Roullet (b. 1847) - who could not reasonably have taught him until c.1870 at earliest, this might support the idea he had some prior occupation.

I attach a second draft note on Pinel: unless anything new emerges to change it by the end of next week (13 Dec) I will suggest this discussion wraps up and the collection update the title above to 'St Malo; the Bastion Fort La Reine and beach, looking east' or something similar, with Pinel as the artist unless they prefer to say 'attributed to'.

As in my note of 6 December above - and it now being well beyond the deadline I suggested - perhaps Art UK and the collection could now wrap this one up, with thanks to all who contributed.

Description
The site has been identified as the Bastion Fort La Reine and beach at Saint-Malo, looking east.