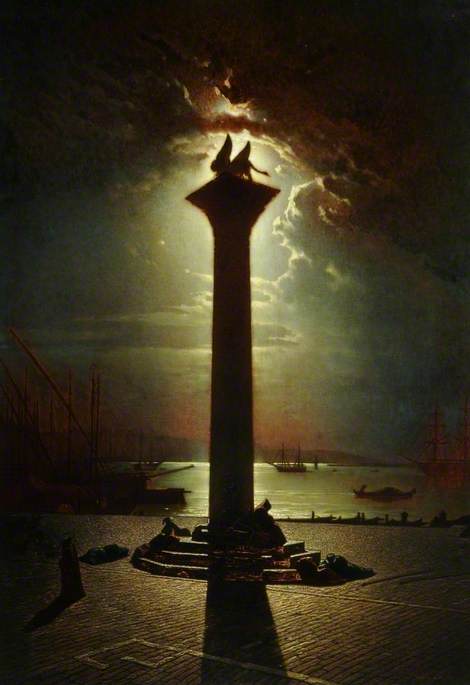 The artist of the original of this work, with differences, under various titles, and dated around 1837, is Friedrich Nerly – but see below. There also appear to be several autograph versions: aside from those appearing at auction, copies are in Bremen and Hanover (although I haven't been able to find a direct link to the collection of the latter), and there may be others.

It is worth noting that one online reproduction (Wikigallery/Christie’s) is listed as (after) Carlo Grubacs, a contemporary of Nerly. However most are given to Nerly and he was known, in particular, for his moonlight scenes.

There is no NICE Paintings record for this work.

Close-up images of the signature are attached.

Is this not more likely to be a case of a 'phantom' artist created by misreading of the signature?

There seems to be no other trace of at least a suitable 'Julius Eluke' but there was definitely a Julius Ehrke (1837-90), by whom there is one example of work on Art UK: the signature surname here can certainly be read Ehrke.

Here is the existing Art UK example by the latter:
https://www.artuk.org/discover/artists/ehrke-julius-18371890

Whether the Venetian subject here is after someone else is probably the more significant matter for discussion.

Apologies for repeating Andrew's information: there were no comments when I wrote the one above, but some sort of glitch in the system that made it very slow in accepting it as 'sent'.

If it is by the known Julius Ehrke, it is probably a copy or derived from Nerly. Ehrke appears to have concentrated on genre/interior scenes and landscapes, though there is not much to go on online.

Here is an interior by Ehrke:

The earliest of the 'Nerly' models provided above (that at Bremen) is dated 1837 and slightly different from the other two, which are identical in detail to the (probably) Ehrke version under discussion: the Christies 2007 attribution of one to 'circle of Carlo Grubacs' may just be failure to recognise that it may also be Nerly: if they had known of Nerly as source they would have mentioned it. The obvious inference is that (for whatever reason) Ehrke copied a Nerly model,

A clear (and confirmatory) version of his signature can be seen here:

Well, Pieter, it would appear that Art Detective has done better than Christie's.

The artist's full name is Carl Heinrich Julius Ehrke. He was born in Ludwigslust, Mecklenburg, Germany, on the 10th September 1835, he married Ellen Elizabeth Leigh in 1866, and died (as reported in the Worcestershire Chronicle Saturday 11th November 1899) in Bath, Somerset, on the 1st November 1899 (and not 1890, as above), aged 64. He was living in Kempsey, Worcestershire, at the time of his death.

The original Nerly version is more Romantic, somewhat reminiscent of Caspar David Friedrich, while this one seems more ominous and even threatening, not to say more lurid. Interesting.

Is there any existing short biographical entry on him: Thieme-Becker, Benezit etc? He only seems to have had two works in London exhibitions, at the RA in 1889 and 1890, sent in from Great Malvern, and presumably his immigration to that area was marriage related.

He will be in the de Gruyter multivolume dictionary,. much more up to date than TB and Benezit , I am sure.

Benezit has an entry for an Eduard Ehrke, born in Ludwigslust, Germany in 1837 (17 February), landscape painter, studied Düsseldorf and Munich, traveled to England in 1860 and settled in Bath in 1876. I suppose this could be a younger brother of Julius Ehrke.

There is a German Wikipedia entry on Eduard Ehrke, which says he died in 1911 in Bath and that he was indeed the brother of the painter Julius Ehrke. The entry (translated) is here:

Interesting (as also the reminder that Dedham is just in Essex rather than Suffolk: perhaps Eduard was drawn there by the Constable connection). With Paul (1840-93), opera singer, it looks like a talented family and, while an unfamilier surname in English, not so in German/US genealogies be they connected or otherwise.

According to the Lutheran parish records in Germany, Eduard (sic) Paul Conrad Ehrke was born in Ludwigslust, Mecklenburg, on the 17th February 1837, and was baptised there on the 27th of the same month. He was the son of Ludwig Heinrich Ehrke and his wife Antoine Anna Ernestine Haidner.

The 1861 UK census shows an Edward Ehrke, born in Schwerin, Germany, aged 24 (therefore born in 1837), as a German language professor, living in the home of a school master, in Rochester, Essex.

Subsequent Census records show him as a teacher of languages.

The 1911 Census shows him living at 2, Lambridge Place, Bath, aged 74, and as a "Retired tutor and teacher of modern languages'.

His probate synopsis reads as:

His interest in painting must have played a secondary role to his profession as a teacher.

In the Essex newspapers of 1860 and 1861, along with his brother Julius, Edward Ehrke is also mentioned as a classical music singer.

One suspects there could be currently unattributed work by one or both Ehrke brothers in public collections, especially those in or near the places they lived.