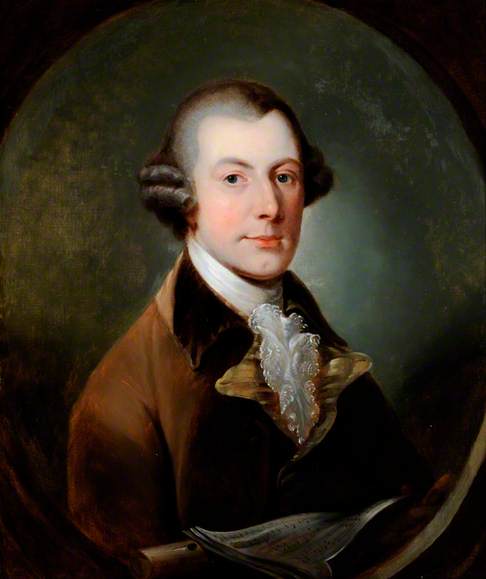 This appears to have been painted by the same hand as another portrait in the same collection. ‘Portrait of an Unknown Young Gentleman in a Grey Coat with a Green Collar’, by Mason Chamberlin the elder (1727–1787), was also given to the National Trust with the house as a hotel by Richard Broyd in 2008. https://bit.ly/35AefBe

Chamberlin had a penchant for painting young men as if their faces had been powdered and rouged, which gives their complexions a somewhat artificial quality, as in these examples in the collection of Fairfax House.
https://bit.ly/2QyhViU
https://bit.ly/2QyZLxl

Could the sheet music and flute point to a likely sitter? Although the flute was very much a gentleman’s instrument around that time, Chamberlin painted Samuel Richardson with a pen and writing board, the architect Kenton Couse with a scale drawing and dividers, and the theologian Samuel Chandler with religious and classical texts, which implies that the objects in this picture might have constituted more than a pastime.

Someone in the circle of Karl Friedrich Abel or Johann Christian Bach? They were good friends of Gainsborough, who painted them both.

Did a search and Popped this up. https://www.invaluable.com/auction-lot/mason-chamberlin-the-elder-r-a-1727-1787-port-3-c-p303otv0yn# . They claim it's by Chamberlin. I don't think so. Then Looked these over, on this site, https://www.artuk.org/discover/artworks/search/actor:chamberlin-the-elder-mason-17271787. Obviously the first painting is Not by the Same Hand. Then compared this to them all. https://www.mutualart.com/Artwork/Portrait-of-a-Family--The-Man-Holding-a-/F9B6AA7EB9E799A6. This feels like the Chamberlin Paintings on the Art UK site. Sotheby's has this as "Attributed to Chamberlin," I don't think so folks, The Hands and The Dress aren't quite right. http://www.sothebys.com/en/auctions/ecatalogue/2005/19th-century-british-and-continental-pictures-w05703/lot.10.html. This is at the Royal Academy. Which presumably means it's actually a Chamberlin. Notice the coat. Even in a Photograph you can feel it between your fingers. The hands are superb. The Bodies attitude and the facial expression are exceptional. The whole piece projects Educated Well To Do Man painted by an exceptional Portrait Artist. Here's another example of Chamberlin's skill. http://www.nationaltrustcollections.org.uk/object/1271064. I Just don't see this Painting (The one in question) in Chamberlin's league. Maybe it was painted by one of his students.

Sorry, I forgot to Post the Link to the Dr Hunter portrait at the Royal Academy. https://www.royalacademy.org.uk/art-artists/work-of-art/portrait-of-dr-william-hunter-1. If you are trying to decide if a painting is by Chamberlin, I would use Dr. Hunter's portrait as a starting place. If your painting is not of that quality it probably isn't a Chamberlin.

For context and/or comparison, Gainsborough's portrait of William Wollaston with flute and sheet music:

His portrait with William Keable playing the flute:

And his portrait of the oboe virtuoso and composer Johann Christian Fischer, who also wrote for the flute:

Could the sitter possibly be a member of the Arne family?? Perhaps Michael Arne???

Looks like Tilly Kettle? It has that odd construction of the head that Ellis Waterhouse remarked upon. Compare, eg, portrait by Kettle of John Owen of Penrhos http://www.artnet.fr/artistes/tilly-kettle/portrait-of-john-owen-of-penrhos-three-quarter-nbF66GilISf2Pl2y5Xv-Ww2 His head-only portraits are similarly aggressively thrust up against the picture plane, and often with an attribute shoved into the foreground, as here

While this may not be by Chamberlin, I do not see Kettle as a more plausible attribution, even if he is not out of the question. It would be of interest to have a costume expert assign a date to this picture.

This man has a dimpled chin, which the Zoffany portrait of Arne does not.

Is there an explanation somewhere for his hair? I can't tell if it's been cleaned away or someone has added some on at a later date. And it still doesn't feel like a Chamberlin.

I wonder if the artist could be Nathaniel Hone, the Elder, who painted the picture of the Hon. Edward Finch Hatton loading his rifle at Middlethorpe Hall? Apparently, he often used his son, John Camillus Hone in his work and there is a youthful image of him at the NPG called The Piping Boy. Could your portrait be him as a young man? (The NPG mezzotint is described as 'after Nathaniel Hone', however.)

Rosy, that is interesting, but the boy's prominent wide eyes do no match our portrait. Here is another painting of him by his father:

The NPG print, by the way, is described as "after Hone" because it is an engraving by someone else after Hone's painting, or a copy.

Chamberlin reportedly showed 50 portraits at the RA between 1769 and 1786, but most of the sitters are unnamed in the catalogues. If this picture is by him, the apparently unfinished painting of the hair might mean it was in progress when he died in early 1787. We need a costume expert to tell us if the dress and hair match that date.

The More Portraits from that time-frame I look at the More I Like Chamberlin, too. Maybe you hit the nail on the head its unfinished which is why it doesn't feel like a Chamberlin to me. Though everytime I look at another candidate it feels more and more like a Chamberlin. Any dating on the Coat yet>?

I'm afraid the dating of the hair and dress will have to come from someone else with greater knowledge in that area than mine.

The key period 'style' elements in the clothes in this portrait are the design of the wig and the dark brown velvet revers to the collar, with a striped yellowish striped fabric from the waistcoat beneath showing - including a buttonhole. This style reflects the more informal English tailored woollen, hunting dress-inspired style – seen in British portraits from c 1760 -70. Looking around at portraits would suggest a date of c 1765 for this portrait. I don't understand why there is talk about the hair being 'unfinished' nor why the sitter is being referred to as a 'boy.' ... a youngish man, but not a 'boy'.

Lou, the hair along the sitter's right hairline appears grey as opposed to brown, which may have been intentional but also suggested the possibility that it might have been left unfinished (though it might also be a cleaning or restoration effect). As for "boy," you must have misinterpreted the references to a picture of a boy by Nathaniel Hone made at the beginning of February, which did not refer to our man.

To my mind, the grey hair in the front and then the darker colour behind was to do with shadowing- as with the darkness on the lower part of the coat in this portrait.... but then I am not an art historian, so I will say no more.

There IS a possibility of a later date-see attachment; Charles Rousseau-Burney, late 1770s by Gainsborough (Met.NY) but I found far more similarly styled portraits in the 1760s.

Our fellow appears to have a crew cut on the top and half the right side of his head and then his hair goes long again. I've never been certain if the painter meant to portray a wig or that's actually the sitters real hair. Either way it looks unfinished or damaged by someone. If it was done in the 1760s then it probably is by Chamberlin.

Does Bendor Grosvenor, Group Leader for British 18th century portraits, have an opinion as to the artist here?

Not by Chamberlin. The identity of the artist is not obvious.

Marion's question, the first in this discussion, remains pertinent, "Could the sheet music and flute point to a likely sitter?" We should ask if the music is identifiable by an historian of music. Clearly the man was proud of it, whether as composer or performer.

What makes you dismiss Chamberlin as a possibility, Jacob?

Might this be a 1760s work by Francis Cotes? Compare below:

Chamberlin's faces are more rugged and he rarely used an oval surround with attributes such as the music in this portrait.

Cotes's handling of paint is thicker and his poses varied and again he rarely used an oval surround, which was quite old-fashioned by the 1760s.

I know their styles intimately. Of course an artist's style varied to a degree according to circumstances. But without a document to the contrary it is my opinion that this portrait is not by either artist. Instead we are looking for someone rather more obscure, I suspect.

Jacinto - I don't know if you've found the artist. This doesn't look quite good enough to be Cotes in the '60s and it's also quite 'old-fashioned' for him - he doesn't normally use 'feigned ovals' for instance.

But maybe you've found the sitter. The first of your links to Portrait of a Gentleman (said to be Thomas Estcourt), looks very much like the sitter here. Same facial features (mouth, nose, chin, eyebrows etc) similar expression, pose and hair. And also holding a flute. Obviously the Marble Hill House portrait is of an man at least 10 (probably more) years older and 10 pounds heavier, but the likeness is remarkable.

But there is problem with the latter portrait as well. Because this can't be Thomas Estcourt - at least not this one:

because he would only have been 22 when Cotes died in 1770 and that is clearly an older man. Possibly the identification comes from the Batoni portrait linked to by that Wiki and dated to 1772. There's certainly a facial resemblance (though the Batoni is more flattering) and again the sitter is holding a flute. So if it's the same guy the other one can't be by Cotes. So rather than resolving things, this must just make them more confusing.

That'll teach me to refresh the page before posting, as I hadn't seen Jacob making the points about Cotes better than me, first.

Also I forgot the Parentheses Problem. Have a shortened form:

and a direct link to the Batoni: