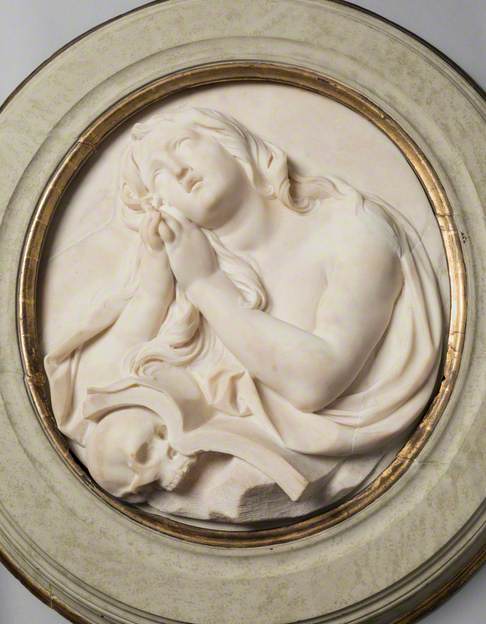 We know that at some point this roundel was attributed to Mazzuoli, but we do not know why. Can anyone offer further information? There are close-up images attached to assist in identification.

Given its acceptance in lieu, there should be official papers of c. 1973-4 giving more information on this attribution and also giving its provenance. The Victoria and Albert Museum should have a file on it too as one of its staff will have been involved in recommending its acceptance in lieu as well - and Sir Timothy Clifford may well be able to provide information too

We have it recorded as a gift from Mrs Theodora Winter in 1968. The acquisition records then say "Italian School 17th Century", and at some point was attributed to Mazzuoli and we are hoping to get any extra information on why it was attributed as such. What makes you think it was accepted in lieu?

This is the acquisition record on Art UK: 'accepted in lieu of tax by HM government and allocated to Manchester Art Gallery, 1974' (see 'more information' below the artwork details on this page).

The July 1967 edition of The Burlington Magazine carried an article by the late Prof. Ursula Schlegel on "The Statuettes of Giuseppe Mazzuoli", which might provide some help. Her "Italienische Skulpturen", Staatliche Museen Preubischer Kulturbesitz (1989), might also be worth consulting.

The record on Art UK must be wrong, as it is recorded as a gift in all the acquisition records here.

Kieran Owens, I have looked at the article by the Burlington Magazine and it has good notes on what style of work Mazzuoli produced however does not mention this piece. Thanks for the other recommendation - do you have any idea where to access a version translated into English?

In the 1939 Register for England and Wales, a Theodora Winter is living in Manchester (b. 1912, married, 'unpaid domestic duties') in Dene House, Lancaster Road. The head of the household was Thomas D. Barlow, whose occupation was listed as Cotton Manufacturer and Director of Bank & Colliery. Could he (or the bank) have a connection to this sculpture?

In the Alan-Osborne-edited 1967-1968 edition of "On View - A Guide to Museum and Gallery Acquisitions in Britain" (Plaistow Publications, 1968), the work is listed as follows:

Theodora Gertrude Winter (née Barlow) was born on the 21st February 1912, the daughter of Sir Thomas Dalmahoy Barlow, GBE (23 February 1883 – 22 November 1964), a cotton manufacturer as well as a bank and colliery director:

She was also the granddaughter of the royal physician Sir Thomas Barlow, 1st Baronet (4th November 1845 – 12th January 1945), and his wife Ada Dalmahoy.

Theodora was married to Carl Winter (1906 – 1966) in Lancashire in 1936. According to the 1939 Register she was visiting or living at Dene House, Lancaster Road, Didsbury, Manchester, with her parents, her sister Penelope Sophia (later Mrs. Raymond Baldwin) and her brother Basil Stephen Barlow.

Carl Winter, the British art historian and museum curator, was born on the 10th January 1906 and died at Grove Lodge, Trumpington Street, Cambridge, on the 21st May 1966. Educated at the University of Oxford, he worked at the Victoria & Albert Museum's collection of English watercolours and miniature portraits before moving to the Fitzwilliam Museum, also on Cambridge's Trumpington Street. More can be read about him here:

An extensive Times obituary can be seen here:

Given the context of Theodora's upbringing, one could assume that the donated work in question was of very high quality and, given her family's wealth, could well have formed part of a settlement for taxes.

Andrew Shore, I have looked at that same Theodora Winter. Perhaps it is her who married to Carl Winter, the noted art historian and curator, from 1936 to 53. I will have to look into the connections with the bank further!

Sir Thomas Dalmahoy Barlow GBE [1883=1964 ] was a significant collector and his life is recorded in ODNB. I am sure that he collected old masters. He had an important collection of prints by Durer. There is a publication on him by Andrew Barlow of 1965. He published books on Durer and on his Melancolia in 1950
In my mind [possibly mistakenly ] I associate him with the Whitworth

Indeed some of the works in his painting collection was shown at the Whitworth in 1968. He would have been well known to successive directors on Manchester City Art Gallery

BHA should record articles on Mazzuoli subsequent to Schlegel

Manchester Art Gallery, you might not have seen my posting at 16.24 before you sent your message at 16.31 to Andrew Shore but it is above and clearly associates Thoedora with Carl Winter the art historian.

The rationale for citing Bernini may be understood when considering the latter's work in the Siena Cathedral:

Mazzuoli's 12 statues for Siena Cathedral have been in the Brompton Oratory since 1895.

He was included in the 2010 exhibition Body and Soul: Masterpieces of Italian Renaissance and Baroque Sculpture edited by Andrew Butterfield

This piece, especially the face, seems a little too soft and generalized for Bernini, but the attribution to Mazzuoli seems quite plausible. See some works by him for comparison:

Try this link for the image that didn't link above:

However, Mazzuoli can be considered a follower of Bernini, so "style of Bernini" is also plausible.

At the moment I am not fit enough to explore the publications listed above, but some of our other contributors might be able to do this. Also a must is the exploration of the boxes of photographs of sculpture under GM's name kept in the Conway Library in Somerset House

Dr Jennifer Montagu, the greatest British expert in my lifetime on Italian Baroque sculpture, is still active and could be reached through the Warburg Library in London

The sculpture may originally have come as a loan, not a gift, while the possibility of its qualification for acceptance in lieu was looked into
Elizabeth Conran would have been a significant member of staff at the time. She later became Director of the Bowes Museum, Barnard Castle. Her contact details must be known to Manchester City Art Gallery. I think that she is still in Durham. If she was contacted, I am sure that she would help with information.

Annual reports of the Export Reviewing Committee recorded acceptances in lieu - these should be in the archives of the Department of Culture and Sport [ now probably titled differently] At this date there will not have been many and mostly concerned with National Museums and Galleries - it took time to involve non national institutions. The files and papers will still be in existence.

Kieran Owens! Thank you for all the help, and yes did not see your 16.24 posting before I sent the message.

Jacinto Regalado! Thank you for the references, I will be sure to compare them to the sculpture to help build a picture of the attribution

Martin Hopkinson! Thanks for all the info, I will update further when I have looked at these sources

The sculpture looks to be very similar or based on this engraving :-
https://www.metmuseum.org/art/collection/search/817126
- which itself is an engraving of this painting :- https://www.stairsainty.com/artwork/penitent-magdalen/
but the face in the sculpture seems more similar to that in the engraving by Morghen that was apparently executed in 1801.

The imagery in question is quite common for such a subject and not particular to the painting or the engraving. I would not draw any conclusions from either.

Whilst common imagery there seem to be very few examples of the particular pose and even less with the skull beneath the book ?

It is essentially a stock pose. If you Google "Mary Magdalen" images, you will see many similar examples.

Whilst I respect what you are saying - I do not see the evidence of such similar images on google - please provide more detail than 'Google "Mary Magdalen" images' - as I do not see any even vaguely similar.

Googling 'penitent magdalen' finds a lot of images but only one that has the torso facing left, hands clasped and skull beneath the book- and I did use a detailed image search.

There are a many minor variations on what I consider essentially the same basic pose for the figure. The skull has been painted both above and below the book, as your searches show. You may, of course disagree with me, but my original opinion is unchanged.

Thanks all for the comments. I will be taking it all on board and update you if anything changes or new information emerges.

A virtually identical relief, paired with one of St Mary of Egypt, flanks the door to the room where St Catherine of Siena lived in the convent of Sta Maria sopra Minerva in Rome. This is oval, which is largely responsible for the slight variations, particularly in the drapery over her left arm. The photos of the pair are mine, the view from the side by Michael Erwee; if I get to Rome in the Autumn(!) I shall try for something better.
But, alas, the Roman relief is also anonymous! And it looks as if it could have been stuck on the wall at any time. Erwee ("The Churches of Rome", I, p.414) calls the pair 18th century; I'd stick to ca. 1700.
But I don't think it is Mazzuoli. Frankly, nice though it is, I don't think the quality of modelling is up to Giuseppe, and the Manchester relief has a longer, more square-jawed chin than his. Giuseppe was the head of a large 3-generation workshop, so I looked at the illustrations in Vincenzo Gennaro, "Arte e industria a Siena: Bartolomeo Mazzuoli e la bottega di famiglia ...", 2016), as the workshop produced a lot of work based on those by Giuseppe, but saw nothing like it.
Also Monika Butzek's "Die Modellsammlung der Mazzuoli in Siena (in "Pantheon", XLVI, 1988) lists models by all the family from an inventory of the end of the 18th century. It includes (no.73) a "Mezza figura in creta ricopiata dal vero per studio rappresentante Santa Mari Maddalena colle mani sopra un teschio, originale di detto Giuseppe", but as she has her hands on the skull it does not fit the Manchester figure. Also (no 138) "Un modello in creta, S. Maria Maddalena,Originale di Bartolommeo sudetto" which is too generic considering the popularity of the saint. Apologies for so long, and ultimately unhelpful contribution.