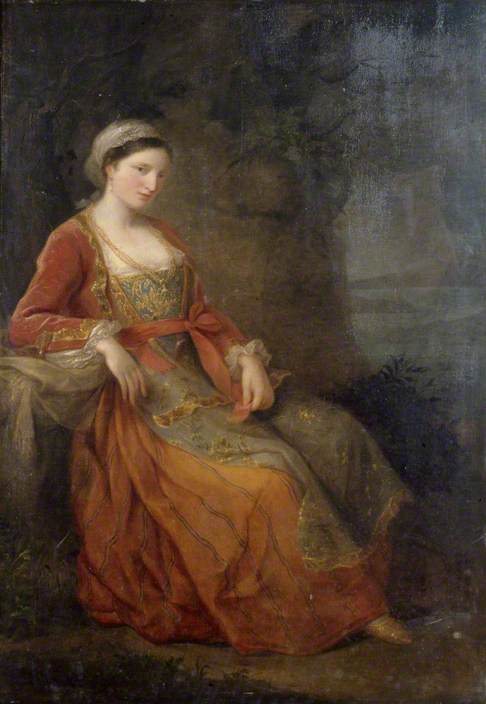 A version of the painting at Saltram https://bit.ly/3hZustS is described there as 'a woman in Neapolitan dress'. In that painting one can see that the woman is set against the Bay of Naples with Vesuvius visible on the far shore.

Art UK adds: The NICE paintings entry for the painting at Brighton includes this note ‘It has recently been debated whether the sitter's costume is à la turque or Neapolitan peasant dress. Kauffman visited Naples in 1782 and the background is believed to represent Vesuvius. The version of the painting in Saltram, Devon, is documented as depicting a woman in Neapolitan dress. On the other hand, costume historians believe that the costume is Turkish. For Neapolitan costume, see: Baumgartel, B. (ed.), ‘Angelika Kauffman 1741–1807 Retrospektive’, Düsseldorf, pp. 198, 204; Ribeiro, A., ‘Dress in Eighteenth-Century Europe’, Yale, 2002, pp. 264-72. Kauffman several female sitters in Turkish costume during the 1770s, and it would therefore seem probable that this work dates from the same decade.’

The National Trust has added: 'We would welcome a public discussion. The National Trust record https://bit.ly/3fQtLjQ for this picture needs work – it contains an unsubstantiated suggestion that the sitter may be Frances Hort, first wife of John Parker, 1st Baron Boringdon of Saltram, who died on honeymoon in Naples in 1764. The date we give is c.1762–1764 but we are not sure this is quite right either. The picture is not mentioned in a letter by Theresa Parker (John Parker’s second wife), written in 1775, which enumerates the pictures Kauffman painted for her and her husband. It may anticipate these – and belong to Kauffman’s early Italian period (c. 1762-4) – or Theresa Parker may have omitted it from consideration, as she did the other two paintings by Kauffman that her husband had acquired on honeymoon with his first wife. It could also date from her early English period (c. 1766-7), or be later, painted after Kauffman’s return to Italy in 1782. There were contemporary precedents for this type of subject, e.g. by George James https://bit.ly/3fqs0uH, Fragonard during his travels with Bergeret de Grancourt (1773-74), and François-André Vincent. The picture has been catalogued as a woman in Neapolitan dress since 1819; given the similarities to the James portrait we are inclined to agree.'

The same background is present in both versions, including what would appear to be Vesuvius, meaning they are both set in Naples. That obviously favors Neapolitan dress. The Brighton picture, despite condition problems, strikes me as the finer version in terms of the figure, which is more delicately painted; the Saltram version looks more like a copy to me.

As no one has mentioned it, it seems worth noting that in 2018 Raffael Vals sold a painting attributed to Antoine de Favray that depicts a woman in a near identical pose and dress. See link below.

There is obviously a connection between the two works, however indirect, and further investigation may provide a better understanding of the Brighton picture.

The Vals picture, unlike that at Saltram, is certainly not a copy of the Brighton canvas. Discovering the origin of the combined dress and pose would be most interesting in itself.

I am not a dress historian, but it seems likely that the dress in question is à la turque, rather than Neapolitan peasant.

Angelica Kauffmann - age 23) In 1781, Kauffman married the painter Antonio Zucchi, who succeeded her father as her business manager.
This is what was written about a similar painting

I think we need Italian, specifically Neapolitan, input regarding the costume.

Title
Portrait of a Woman