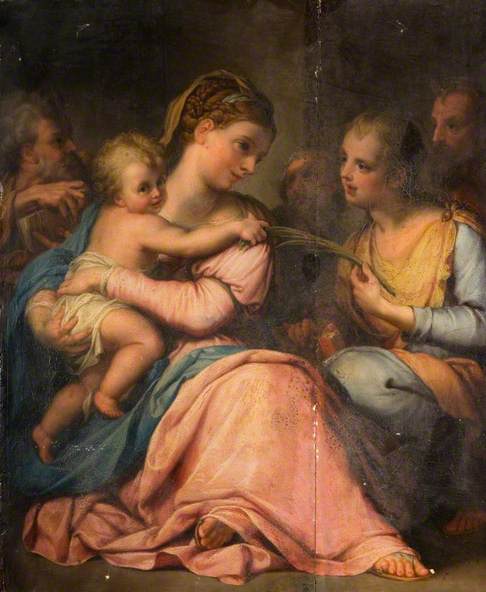 The Collection has commented: ‘We have the following note on the database: Various experts' suggestions: Antonio Bellucci (1654-1724) Italian master who worked in England; Marco Benefial (1684-1764), Roman school, etc, and definitely 18th C. (I think that subject is 'The Mystical Marriage of Saint Catherine' - Olga Baird, May 2009’

The contributor has added: 'I doubt this is by Bellucci, whose manner is less classical and more decorative, especially during his English phase, but it might be by Benefial, who argued for a return to classical principles exemplified by the High Renaissance and the Carracci. Ideally we would get input from Italian sources with expertise in the field.'

As I have noted on another discussion, the proposed subject here does not always show St Catherlne's wheel or the placement of a ring on her finger. See below:

possibly a copy of a painting in the circle of Federico Barocci? I have no access to the literature on him

The sweet colour recalls Barocci, but the drawing is more rounded and classical and less Mannerist.

Actually it looks to me as if the female saint is holding in her right hand what looks to be a section of a wheel. The legend of St Catherine of Alexandria says that the wheel shattered when she touched it (she was then beheaded), so only part of it would make sense in the iconography and solves a space problem in a crowded picture. The saint is also holding a martyr's palm (as in the van Dyck) which also perhaps hints at her Egyptian origin.

That said I don't think this is a mystic marriage - there's no 'ring' or touching of hands. Instead the infant Jesus is clutching the martyr's palm. In fact I don't even think it's a Holy Family, because the male figure on the left is holding a book, not a usual attribute of Joseph. And even if it was, the other two men are unexplained.

This looks to me to be a St Catherine and the Philosophers, with the three bearded men being some of the pagan philosophers who in her legend were converted to Christianity by her eloquence and were then martyred.

The light, luminous colours and soft features are certainly reminiscent of Barocci's pictures of the Madonna and Child, but an expert would really be needed to judge.

I think she is holding a book in her right hand, but it might be resting on a portion of the wheel. It would be desirable to get a close-up of that area at the highest available resolution.

The idea of the three men alluding to the pagan philosophers associated with St Catherine is plausible. I never liked the Holy Family designation for this picture, since the the three key figures are in the foreground and the men are clearly secondary background elements.

There is a brown curved rim, as of a wooden wheel, between the pink dress of the Virgin and the light blue dress of the saint where their two knees coincide. It could well be the wheel.

Regarding the artist it seems to me that there is a resemblance to the works of Giorgio Vasari, who would fit quite nicely the description of beeing a painter of classical principles.

The madonna almost looks like a reversed copy of Vasaris "Holy Familiy with Saint John" in Bardford.

I think Vasari had a different style or feel, more Mannerist than this.

Could this be the work of Perino Del Vaga (1501–1547)? My first composite is based on ‘HEILIGE FAMILIE MIT JOHANNES’ on the Lempertz auction website. https://tinyurl.com/4rwb4sbn

My second composite is based on ‘The Holy Family’ (c. 1545-1546) at the National Gallery of Victoria https://tinyurl.com/mrybhzve.

I've attached a detail of the area of interest, as well as one of the book in its red binding, and I've asked the collection to let us know what they can see and for a better photograph if possible.

Could the subject be ‘Rest on the Flight into Egypt'?

For example, see this engraving at The Met, which includes similar figures. https://www.metmuseum.org/art/collection/search/367762

No, Marcie, that is not plausible. There is no sign of an exterior setting, but rather the opposite; the background figures do not fit, and neither does the presence of a female martyr saint. The only extraneous figure in the engraving you link is probably a donor.

I'd like to thank Clare Marlow, Collections Assistant, Wolverhampton Art Gallery for the photographs attached.

'We have a note in our records by Olga Baird, a previous curator who believed the subject may be the Mystical Marriage of St. Catherine. ‘Various experts' suggestions: Antonio Bellucci (1654-1724) Italian master who worked in England; Marco Benefial (1684-1764), Roman school, etc, and definitely 18th C. (I think that subject is 'The Mystical Marriage of Saint Catherine' - Olga Baird, May 2009)’

One option is to use a descriptive title, something incontestable like "Madonna and Child with a Female Martyr Saint," with a note like "This may be a representation of the mystic marriage of Saint Catherine of Alexandria."

Title
The Holy Family with Saints

Description
The palm in the hands of the figure on the right indicates this is a female martyr.