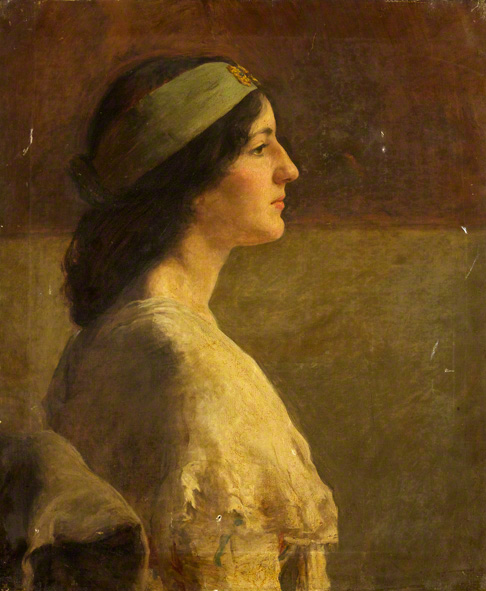 An author of a book about the artist E. H. Shepard (the 'Winnie-the-Pooh' illustrator) recently wrote a story for Art UK, mentioning a work in the Newport Museum and Art Gallery collection, 'Portrait of a Young Woman'.

The story can be read here:
http://bit.ly/1TOaW1H

‘Shepard painted relatively few portraits… however… Shepard tells us: ‘I persuaded Ethel [Shepard’s sister] to sit for me. It was an ordinary portrait, but it was accepted by the Royal Academy and hung on the line at the Summer Exhibition, the only success I have ever had with a portrait.’

Until now, it has always been thought that this portrait was purchased at the Summer Exhibition: Shepard makes no further reference to it, and it is not catalogued in his personal archive. From the context it would seem likely that this portrait of Ethel Shepard was exhibited at the Royal Academy in 1902, the same year that the Newport Museum and Art Gallery's 'Portrait of a Young Woman' was acquired. Ethel Shepard was of a similar age to the woman pictured in this portrait, and so might this be the ‘missing’ portrait of Ethel? Further enquiries may perhaps throw more light on this intriguing mystery.’

Ernest Shepard's portrait of 'Miss Ethel Shepard' was exhibited at the R.A. in 1901, one of two works he showed there that year. If, as seems likely, this is that portrait, then it was perhaps purchased at the R.A. by a private buyer who gave it to the museum the following year. I presume James Campbell has been in touch with the collection to know the acquisition year - a pity if that's all the info they have.

Other than that the obvious course would be to try and find a photograph of Ethel, but again I imagine that Mr Campbell, as a Shepard biographer, must have explored that angle: indeed I see that a 'Minette Shepard' wrote the Foreword, so he's clearly in touch with the family.

According to Graves’ ‘Royal Academy Exhibitors’, Shepard’s ‘Portrait of Miss Ethel Shepard’ was in fact exhibited in 1901 (cat. no. 391). Unfortunately an image of this painting was not included in ‘Royal Academy Illustrated’ for 1901.

Although I would imagine that the author is well aware of it's existence the University of Surrey Library holds a Shepard archive which includes photographs of Ethel Shepard (cat nos EHS/F/9), unfortunately they are dated as being c1935 so may not be of too much help in identifying a much younger Ethel), the archive catalogue is online and searchable here http://calmarchivecat.surrey.ac.uk/CalmView/Record.aspx?src=CalmView.Catalog&id=EHS

Ethel Jessie Shepard was not EHS's younger sister, as some sources state (e.g. http://www.pooh-corner.org/shepard.shtml ) - she was the eldest of the three siblings, born in August 1876, and would have been no more than 24 when this (really extremely nice) portrait was taken.

Inasmuch as it's sensible to speculate about a sitter's character from a portrait, I would say that this young woman seems intelligent and serious-minded, and in conventional terms is plainly no great beauty. So I am unsurprised to discover that, after initially working as a music teacher, in 1923 Ethel Shepard became a missionary in India, and ultimately Head Deaconess of St Hilda's Society in Lahore. Her life was effectively that of a Protestant nun, and she never married. She made very occasional trips home, staying with her surviving brother Ernest - the third sibling, Harry, with whom she had lived before the war, was killed in action on the Somme in 1916. She died in Nov 1941 back in England "after a long illness" . I feel increasingly confident that this is her.

James Campbell is not just in touch with the family, he is in fact *of* the family - he is the son-in-law of Minette Hunt (née Shepard), EHS's granddaughter, and runs the Shepard Trust. See http://www.dailymail.co.uk/news/article-3296906/Poignant-sketches-Winnie-Pooh-illustrator-E-H-Shepard-World-War-trenches-discovered-trunk-not-opened-100-years.html .

Minette was only four when her aunt Ethel died in 1941, and having been taken to Canada at the beginning of the war, may never have met her. Nevertheless I cannot but think that she, John Campbell and the Trust are in the best position to know if this is Ethel or not - surely the family must have some pre-WWI, or at least pre-1920 photos of her?

Mr. Bullock, thank you for the correction of the Shephard children birth order. Earlier in the evening, I ran across this drawing and wondered which source was correct.

Title
Portrait of a Young Woman