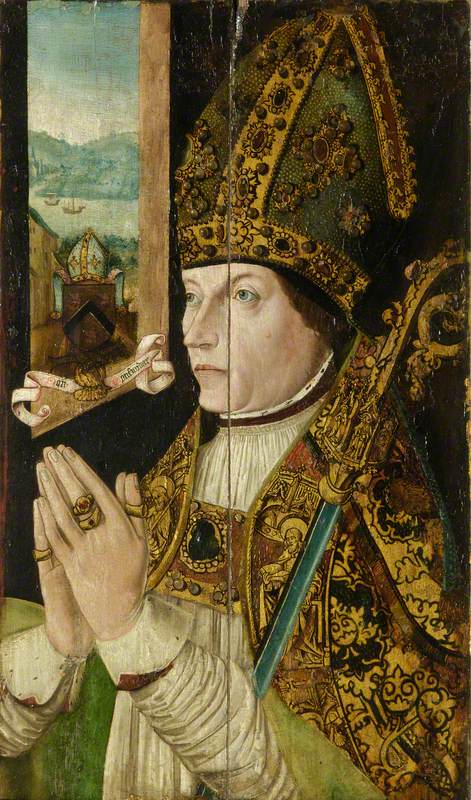 University of Aberdeen agree that this attribution is acceptable, however 'given how little survives of pre-reformation Scottish painting, there is some discussion about the outside possibility of it being painted by an artist in Scotland'.

'The difficulty with simply assuming that the portrait was painted in Flanders is that so little survives of pre-Reformation altar pieces, etc. in Scotland. A comparison with both religious and secular architecture in Scotland would imply that religious art would have been painted by a combination of ‘Scottish’ and ‘English, ‘Flemish’, French’, etc., artists, with influences and preferences depending on the cultural and political circumstances. Alexander Bening, a later 15th-century Flemish miniaturist of Scottish descent is worth noting as an example of this mix.

Rather than assuming that the portrait of Elphinstone was painted by an ethnically Flemish artist in Flanders, or conversely by a hypothetical ‘Scottish School’, it is better that we recognise the possibility of painting taking place in Scotland during the Renaissance (as has been suggested for elements of the Trinity Altarpiece) and that ‘Scottish’ artists could have been part of wider networks and may have included painters of high quality. Absence of evidence is not evidence of absence. Future work could include analytical work on paint and boards of the Elphinstone portrait to help identify where it was painted.'

This discussion is now closed. Unfortunately, without scientific analyses of materials and panel, and specialist comparisons with other panels, no further useful progress on this topic is likely.

This question can't really be answered without substantial research in early Flemish-Scottish cultural exchanges, and all sorts of costly scientific analysis.

We know very little about early Netherlandish artists and even less about early Scottish. A few historians have attributed this picture to someone working in Scotland, but the artist was more than likely born and trained in the low countries, so for me, the Flemish school attribution should remain until some further research establishes a Celtic-Flemish school!

It is typically Northern Renaissance, but the clumsy drawing of the hands would be disappointing in the context of the best Flemish masters. Only analysis of the boards might give some clues as to where they were grown.And Tim, there's nothing remotely 'Celtic' about it: international Gothic.

St. Andrew's University Institute of Scottish Historical Research has a page online devoted to Scotland and the Flemish People. One of their pages addresses the question of Flemish migration to Scotland in the Medieval and Early Modern period. The following is taken from the page:

"There is evidence that the Bruges painter Willem Wallinc, master of the Bruges guild of painters in October 1506, was resident for a time in Scotland. He may have been the same William Wallanch or Wallange employed by George Brown, Bishop of Dunkeld between 1505 and 1516, as well as the same artist who painted the portrait of Bishop William Elphinstone of Aberdeen in the early sixteenth century, a copy of which bears the label ‘William of Bruges’."

Also, a search of the British Museum catalogue reveals the following print of Elphinstone, as painted by William of Bruges. Whether this painting is a copy of an original by a Scottish artist is to be considered.

The Aberdeen University Review (Vol 13 - 14, 1926) also refers to two portraits. "Bishop Elphinstone's likeness is preserved in two versions of one portrait. That in the University he founded is contemporary but it hangs in shreds from the panel on which it was painted ; the other, that reproduced, is old also and has been in the possession of his family at Carberry Tower time out of mind. It is attributed to William of Bruges, whose identity cannot be established, and is probably a work of the Flemish school. Although somewhat repainted, it is in fair condition."

This latter portrait is reproduced in 'Scottish Portraits', edited by James L. Caw

Attached is a composite of known images of the Bishop for anyone's consideration. Of note is the addition of a cross resting upon the Bishop's chest in the image on the right hand side.

Unfortunately I believe that it is extremely unlikely that this question is going to be resolved on Art Detective. As the colelction noted, Flemish/Scottish artistic contacts in the period is a very difficult area. Without costly scientific analysis of materials and panel, and specialist comparisons with all such works 'in the flesh', I do not think useful progress will be made here.

Acquisition method
gift from the sitter (?)