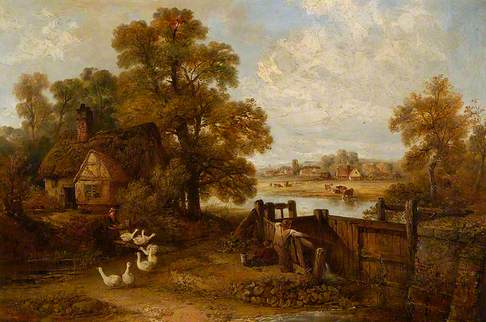 I have seen this painting described as a 'Flash Lock on the Stour’ in a very old magazine. I am researching the history of the Stour navigation and its representation in art.

The Collection has commented: 'We have checked our database, and it is listed only as 'Suffolk Scene', so can neither confirm nor deny the description.'

The River Stour rises in east Cambridgeshire and flows into the North Sea at Harwich. For most of its 47 mile course, the river runs on the boundary between the counties of Suffolk and Essex. It is interesting that the painting is listed as 'Suffolk Scene....' as, on the face of it, the view the artist had took in both Suffolk and Essex. Hopefully the village on the bank with the cows grazing will be identifiable even after such a long passage of time.

As a guide at National Trust Flatford and having built up some knowledge of John Constables painting I can assure you that this is most certainly NOT the painting that John Constable did which is known as A Lock on the Stour.
It is certainly in the style of Constable but is not a scene that I recognise at all. The cottage is similar to Willy Lotts Cottage, but the setting is wrong for that premises. In the background appears to be a castle, there are no castles on the Stour that I am aware of and in addition I cannot see a lock of any sort either Flash Lock or the more modern (in overall terms) pound lock.
This picture is similar to one I was asked to comment on two or three years ago where a person thought that he had a Constable masterpiece, I was sorry to disillusion him but I made similar remarks about his picture, and have not heard from him since!

The lock gate itself is surely closely based on the lock in Constable's 'Flatford Lock' at Anglesley Abbey http://www.nationaltrustcollections.org.uk/object/515780, engraved by John Lucas as 'A Lock on the stour' in 1831, with many components in very similar juxtaposition.

The painting looks like a recombination of Constable elements. The village, cottage and cows may come from other Constable compositions. I'll look further.

The National Trust's Constable 'Flatford Lock' is properly called 'Landscape: Boys Fishing', the title of the painting as exhibited by Constable at the Royal Academy in 1813. It was included in the Tate Gallery's 1976 Constable exhibition as such (cat. no. 118), although the catalogue authors recognised their decision was controversial. In any case, the author of 'Suffolk Scene' is more likely to have used the Lucas print as a source.

Another link to the Lucas print:

I wonder if this is a genuine "Tom Keating" ???

An interesting thought Louis, but if I am reading the accession number correctly it would appear that the painting was acquired in 1939, using funds from the Felix Cobbold bequest.

Title
Suffolk Scene, a Cottage and Some Geese