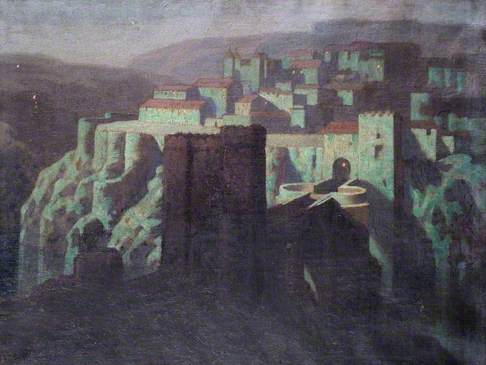 I suspect this is the city of Toledo. It is probably not an exact architectural match, but seems clearly based or derived from it, though I cannot exclude that it might be a composite meant to represent an archetype of a Spanish city. In addition to the bridge, note the presence of what appears to be or certainly resembles the well-known Alcázar of Toledo at top centre. It could also be simply a matter of artistic license.

The Collection has commented: 'Our feeling is that, rather than this being an image of Toledo, it could be an imaginary composite image drawing on aspects of the architecture at Toledo, particularly a version of the Alcantara Bridge, with aspects of the topography of Cuenca, perhaps even Rhonda – all picturesque cities that Littlejohn could have seen pictures of. I would be delighted to see evidence that this is Toledo.'

John Littlejohns was a member of the Royal Society of British Artists. Littlejohns was a prolific exhibitor. Their exhibition records show the following: 1915, cat. no. 145 'A Gateway Toledo'; 1916, cat. no. 2 'Spanish Bridge'; 1919, cat. no. 318 'The White Bridge'; 1919 (Autumn), cat. no. 313 'A Night in Spain'; 1926, cat no. 85 'A Memory of Spain'; 1928, cat no. 33 'A Spanish Gateway'. As Jacinto says, the present view does not appear to be an entirely accurate record of the view at Toledo, but given that it is a relatively close match, and we know from the 1915 exhibit at the RBA that the artist titled one of his paintings 'A Gateway Toledo' there is a reasonable presumption that this is a view of Toledo. It appears that the collection's painting is dated 1919 which is the year of his RBA exhibit 'The White Bridge'.

I echo the Collection's feeling.
The circular side platforms are reminiscent of the series on the Puente de Toledo in Madrid: https://es.wikipedia.org/wiki/Puente_de_Toledo#/media/Archivo:Un_paseo_a_media_tarde_por_los_alrededores_del_río_Manzanares_{LPARENTHESES} 14170903005).jpg.
That's just a word association away from the Puente de Alcantara in Toledo whose angular platforms are replaced and which has a crenellated tower at one end: https://es.wikipedia.org/wiki/Puente_de_Alcántara_{LPARENTHESES} Toledo)#/media/Archivo:WLM14ES_-_11072005_122753_7889_-_.jpg
The narrow ravine and background heights remind me a lot of Ronda, but I don't know Cuenca.
I presume other cities would provide other features. Granada? Any more ideas?

This is not Madrid, and the bridge is closer to Toledo's Alcántara Bridge than to the Toledo Bridge in Madrid. Cuenca does not have a comparable bridge, to my knowledge, and the bridge in Ronda is different.

Apart from the works I listed above there are no other exhibits by Littlejohns at the RBA of any other named Spanish city, town, or landmark. Toledo is the only one to be mentioned specifically.

Some relevant photos of Toledo:

I'm inclined to think this may be a composite of Toledo and Ronda (images of the latter below), with possibly some element of Cuenca thrown in. The Alcázar, however, goes more with Toledo:

I have been examining further exhibition records for this artist. There is an apparent absence of views of Spain other than those listed above on 11th June. I think it improbable that the artist visited Spain during the period 1914-1919, due to (1) First World War and (2) the Spanish Flu pandemic 1918-1920. Also I cannot find any record of him taking a ship from the UK to Spain or Portugal during that period. If Littlejohns had travelled to Toledo I would have expected him to pass through Madrid and there is no record I can find of JL paintings of Madrid.

As Jacinto said in his introduction to this discussion, the Reading Museum painting appears to be based on Toledo. The landscape outside the city is also a good fit. My assumption is that John Littlejohns worked up his painting in his studio based on photographs, drawings or other paintings he had seen of the city. That, coupled with his artistic interpretation of the scene, is likely to have resulted in a view which is not entirely accurate although certain features will have altered over the past 100 or so years. The only listed painting of his I can find with 'Toledo' in the title is the RBA exhibit in 1915. But I think it quite possible that the other paintings listed above are intended to be of Toledo or are based on it. As the Collection's painting is dated 1919 I would hazard a guess that it may well be either 'Spanish Bridge' or 'The White Bridge', both of which were shown at the RBA in 1919.

I have walked across the bridge at Ronda a few times and I am as sure as I can be that this particular view is not based on Ronda.

Finally, is the collection satisfied that there are no exhibition labels, or inscriptions, on the reverse of their painting?

Is the current title known to be the original title, meaning what the painter gave the picture, or was it assigned later by someone else?

“My pictures” wrote Mr Littlejohns to me, “are seldom topographical”. A foreground may come from one end of Sussex, a middle distance from the other end, and the scheme of colour or light from neither thus the truth of a typical landscape for Mr Littlejohns is apparent, not by a visit to a peculiar place, but by synthesising into an integral beauty a number of impressions.”

I think that most people on this thread have already expressed an opinion that it is likely that this is a piece of work formed though using various sources. As can be understood from the attached article, John Littlejohns produced images from both using his imaginagion and borrowing from various sources, in this case, local architectural elements surrounding Toledo. After reading the article, It does not seem likely that this was produced in any place other than in Britain.

John Littlejohns had definate ideas concerning art and education. He believed that it was equally as important to nurture the imagination as well as pupils’ technical skills.
As can be seen in ‘The Spanish Bridge’ from 1915, the footprint could also have been reused to create the painting from Reading Museum.
i) Spanish Bridge and architectural elements


* Born in Orchard Hill, near Bideford, Devon on the 4th of May, 1874.
* Trained as a pupil-teacher of drawing in the Art School in Bideford, Devon.
* Moved to Swansea in 1896, and worked as a teacher.
* Recorded in the 1901 census as living as a boarder at 39 Walter Road, Ffynone, Swansea, and was working as a ‘School Art Master’.
* He moved to London in 1906 and shared a studio with the landscape artist H. E. Compton.
* Exhibited in the Royal Academy exhibition of 1911, No. 532 ‘Brentford Bridge’
He was a member of the Royal Society of British Artists and Pastel Society.
Littlejohns lists his occupation on the schedule of a 1935 return journey from Japan, as an ‘Author’.
He had published at least 22 art and education books. (‘Isaac Pitman and Sons’)

“ With light and line his landscapes invite thought-weary man to places where wind and sunshine are free to roam; “
W. H. Chesson, from the Studio, 1922.

It seems clear now that this is not an exact rendering of a specific Spanish city, but an approximation or composite version of one, clearly based to a significant degree on Toledo.

On 17 July I passed this message from the Collection on to Elin, but unfortunately failed to post it here as well, by mistake 'Please pass on my thanks to S. Elin Jones for a very helpful reference about Littlejohn. The Studio article makes clear his interest in idealising landscapes without losing the character of a place. I imagine he is doing the same with people in his painting The Conspirators https://bit.ly/3nHT9O5 in the Reading Museum collection. I wonder if anyone has thoughts about the setting for this scene?'

Grant, I have additionally asked the Collection today if they are satisfied that there are no exhibition labels, or inscriptions, on the reverse of their painting. David

The setting of "The Conspirators" appears to be a marketplace in a Middle Eastern city.

The most popular 'exotic' place depicted by British artists at that time was Morocco. Notwithstanding that the interior was a dangerous place in the late 19th century the country was a relatively short trip from the coast of Spain and artists ventured to Tangier and beyond. By the early 20th century European visitors were starting to be accepted more readily. In this case, it is recognised that it is highly likely the artist painted The Conspirators in his studio.

A view of Toledo by Littlejohns, 1930, on the Period Paper Historic Art LLC website. https://tinyurl.com/tv8bvjab

“This piece was illustrated by Littlejohns, John. Artist signature in print - bottom right of image.”

Grant, the Collection have commented: 'Sadly There are no exhibition labels of inscriptions on the reverse of the Spanish Bridge painting.' David

David, many thanks for advising the results of the physical examination of this work by the collection. Picking up on Jacinto's point of 14/06/21 we may now safely work on the basis that the current title 'Spanish Scene' was not given to it by the artist. Marcie's very useful composite of 01/10/21, together with photographs provided by others, confirms that this painting is largely based on the city of Toledo, with Littlejohns using artistic licence in order to achieve a composition which he found satisfying. Unless there is anything further any contributor wishes to add, I am proposing to recommend that this discussion be concluded on the basis outlined above.

A possible title could be "A Spanish City (based on Toledo)"

I agree, subject to the approval of the collection.

He seems known, but the 1922 Chesson article did not reach the Cornwall Artists summary which includes useful information and sources:

Perhaps someone more 20th-c. than me would like to have go at 'potting' his 'bio' a bit better....

Pieter, before doing so can I check internally here why the David Buckman biography of Littlejohns does not appear on the profile as it does for other artists, as I understood this covered Art UK's biographical needs. David

The principal inspiration for the painting currently titled as 'Spanish Scene' is the architecture and landscape at Toledo in Spain. John Littlejohns has used artistic licence in order to achieve a composition which he found satisfying.

As S. Elin Jones noted on 16th July 2021: “My pictures” wrote Mr Littlejohns to me, “are seldom topographical”. A foreground may come from one end of Sussex, a middle distance from the other end, and the scheme of colour or light from neither thus the truth of a typical landscape for Mr Littlejohns is apparent, not by a visit to a peculiar place, but by synthesising into an integral beauty a number of impressions.” Source W. H. Chesson, from the Studio, 1922.https://archive.org/details/studiointernatio84lond/page/27/mode/2up?q=.

The collection may wish to consider a possible amendment to the title of this work to "A Spanish City (based on Toledo)".