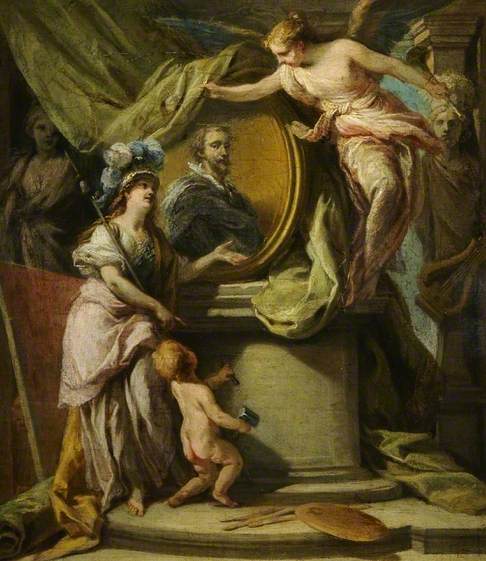 If this is by Louis Chéron (1660–1725), as suggested by the Deputy Keeper of the National Gallery in 1966 in the NICE Paintings entry https://bit.ly/3gvHmyn, it was presumably a late work. This was engraved (with the image reversed) in 1724, which means the painting can be no later than that. The print is here https://bit.ly/36L5pF7. This was made as the model for an engraved frontispiece for a work on Rubens. The print was made by Bernard Baron, a French engraver active in England who is known to have made other prints after Chéron. The latter had settled in England by the early 1690s and was not only a painter but an illustrator or designer for prints to be engraved by others, as well as an "indifferent" engraver himself. It is highly plausible that this picture is by him. A closely analogous engraving (c. 1721) of quite similar design, known to be after Louis Chéron, served as the frontispiece for a series of prints after the Raphael cartoons now at the V&A https://bit.ly/34KcUJI.
It is of note that both engraved frontispieces and their accompanying prints were issued by the same London publisher, Carington Bowles, who may well have commissioned their painted models from the same London-based artist, namely Chéron.

If this were opened to public discussion as to artist, it might come to the attention of François Marandet, an expert of the work of Chéron, who took an interest in a work he believes to be by the latter which is currently under discussion on Art Detective https://bit.ly/2UeDyZS.

Would it be possible for someone (presumably Marion, who proposed the other Chéron discussion) to contact François Marandet about this picture to get his opinion?

The current title for this picture, "The Arts," should be changed to reflect that this is a glorification of Rubens, whose portrait is being unveiled by Fame (with her trumpet) and attended by Minerva/Athena, while a putto carves the title of the print series (which is clearly readable in the engraved version). The shadowy figures at far right and far left are architectural ornaments.

The print made after this painting was the frontispiece to a set of eight other prints after oil sketches by Rubens on episodes from the life of Achilles. Actually, the other prints were not made directly from the original Rubens sketches but from painted copies of them (four of which survive, apparently in private hands), which were apparently made to serve as models for the engraver, potentially by the same hand who made our picture. All of this is discussed in a portion of the Corpus Rubenianum, kindly brought to my attention by Andrew Shore via David Saywell.

As of 1975, when the aforementioned volume of the Corpus Rubenianum was published, our picture was taken for lost, even though it had been at Sheffield since 1951, when it was purchased by the collection. Before that, it was known to have been sold in 1794, but its subsequent history was apparently obscure. The British Museum now carries the information, in connection to the print version of the frontispiece in its holdings, that the original picture is at Sheffield (after I alerted the BM to that effect).

A possible amended title for this picture is "Minerva and Fame Unveiling a Portrait of Rubens."

I've emailed François Marandet. Apologies for taking so long to get round to this.

François Marandet has long been familiar with this painting, which in his opinion has nothing to do with the art of Louis Chéron. It is to appear in a forthcoming article by him, so there will be much more to say when that appears. He will let us know when it comes out.