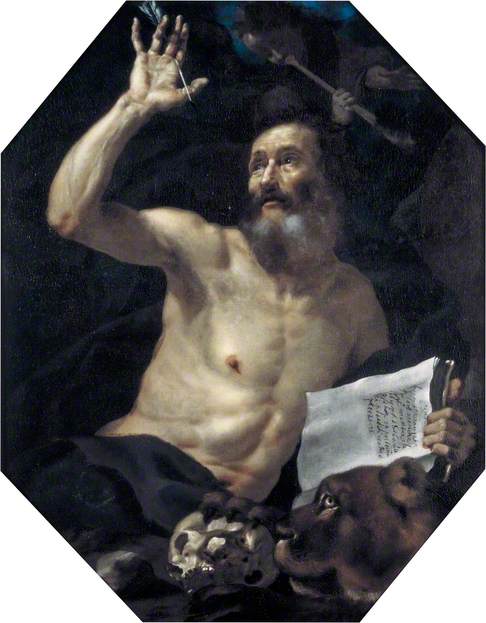 In my view the painting is definitely Florentine mid-seventeenth century. The most likely candidate here is Carlo Dolci on the basis of several paintings from this period, including the attached. During this time, Dolci also worked on various sets of the Four Evangelists, and most of them were in an octagonal format like the present example - https://bit.ly/3tY4OIg. Having said this, we would need a better photo for further comments. There were many good artists working in Dolci's circle, including Mario Balassi and Ottavio Vannini who were both competent enough to paint the City of London's painting.

This does not look sufficiently finished to be autograph Dolci.

Here is a Dolci St Jerome for comparison:

From what I can find online, the work of both Balassi and Vannini tended to be more highly finished than this picture appears to be. Perhaps the photo is a bit out of focus. A high-resolution image is definitely needed.

I'm pleased that a debate is forming here, and I encourage you and others to comment further and suggest alternative attributions.

May I add that the painting we're discussing probably depicts St Mark the evangelist and not St Jerome. Even though the inclusion of the skull is rare in depictions of St Mark, such inclusion would not exclude his identification. See for instance ter Brugghen's St Mark in the Historisch Museum Deventer

As for the attribution, I still think Florentine ca 1650 is a good fit. If by Dolci, it isn't one of his highly polished paintings that align with Sassoferrata's - ex the St Jerome cited above. Here we're seeing a style that is closer to that of Vignali who was his teacher

Here is a Dolci St Mark, apparently an early work (c. 1640), when a teacher's influence would presumably have been stronger than later in his career. However, the typical high finish is already evident:

The iconography is much more in keeping with a St Jerome than a St Mark, not only the skull but also the degree of nakedness, though no doubt an exception is possible (although two exceptions together seem rather less likely).

Would the presence of an angel with a trumpet in the upper right not suggest Jerome rather than Mark?

Attached is a detail of the text in case it means anything to anyone.

Yes you're right about the trumpet, and I was thinking about that earlier. But St Mark is sometimes depicted alongside an angel (see the attached for two examples, even though these don't feature long trumpets). The main reason why I initially doubted whether it could be St Jerome is the colour of the his mantle. St Jerome's is invariably red, whilst St Mark's is either dark blue/green.

Do you have other details of this painting, aside from the one showing the inscription? I would appreciate seeing a good close up of the face and right hand

Jerome is most often in red but not always:

Could this possibly be Neapolitan or Roman?

Dolci appears to show hermit saints as relatively emaciated, which is not the case here, and the whole feel of the picture strikes me as too muscular/sinewy/masculine for Dolci.

The fact that this shows St Jerome with an open book displaying writing might suggest that it is meant to emphasise his position as one of the four Latin Church Fathers (along with St Gregory the Great, St Augustine and St Ambrose).

There's a painting of St Gregory (also with an open book) at the Walters Art Museum:

which is also octagonal and similar size (128 x 106 cm, this is 112 x 89) which came from the ceiling of the library in the Dominican convent of Santa Maria Novella in Florence. It's by Jacopo Vignali and dated to around 1630. Could this be related to that?

There's also an octagonal St Ambrose, almost the same size as the Walters St Gregory, still in Florence, attributed to Vignali at the Museum of the Ospedale degli Innocenti (pdf download):

I am hardly an expert, but this looks closer to Vignali than to Dolci to me. Compare below:

For what it's worth here are some other paintings by Dolci that suggested his name to me.

It would be a good idea to contact Dott Francesca Baldassarre for her views. She's the current leading authority on this artist.

Nicholas, in reply to your message 22/05/2021 15:28, please find attached details from the hand, face and inscription from the image file in the Art UK record, which clearly is somehow not the one shown on the Art UK site. I will ask relevant people at Art UK today if that can be corrected to help this discussion. Moreover, I noted an equally different colouring on the COLLAGE website with a zoom facility for other details (https://bit.ly/3bOzdm8). I have asked the Collection if they might have a better quality image. David

Thanks for sending these details which are very helpful. On the basis of these I do not think the painting is Florentine 17th century or close to Dolci. Sorry about this, but let's continue discussing because it's a good picture that will certainly lead to an identification

The inscription text kind of looks Italian, and says something like:

good nature in the third hour of prayer, while that time goes away, he has the opportunity to appease this sinner

I realise that doesn't necessarily make very much sense(!) but perhaps someone recognises it as something written by Jerome?

Everything fits a St Jerome, but not a St Mark.

A picture of the same incident in St Jerome's life:

According to the website of the Biblioteca Domenicana at Santa Maria Novella:

there was an extension built to the library between 1618 and 1636, which ties in nicely with the 1630s date that the Walters give to their St Gregory. The extension was then demolished to build Florence's first railway station in 1847, so any structural paintings (as this must be with the shape) would no longer be required and difficult to place elsewhere and so likely to go on the market.

The London picture was bequeathed to the City by William Dunnett in 1888, so that would tie in with the pictures being dispersed after the demolition. And according to the Guildhall website (https://bit.ly/3ff9vcA) "Dunnett is believed to have spent much of his life at Vicopelago [now part of Lucca] in Italy building up a miscellaneous collection of paintings, antiquities and other items". So clearly he was in the right place to buy Florentine paintings.

The St Jerome is a bit smaller than the St Gregory and St Ambrose (which are 128 x 106 and 130 x 110, so close as to suggest linkage) but not all four Church Fathers would necessarily be the same size in a decorative scheme, it would depend on the architecture of the extension. Artists would adjust to cope as in this asymmetrical piece by Vigneli:

Certainly Vigneli seems a more likely artist for the St Jerome than Dolci whose work seems sweeter and softer, perhaps reflecting later tastes. Obviously there will be some similarities as Dolci was Vignali's pupil, but this looks more like the latter.

It would seem we need a Vignali expert, if there's one to be had.

From left field, it reminds me slightly of Johan Carl Loth.

Below is a St Jerome by Loth. It has a different feel, less Italian, even though Loth spent most of his career in Venice:

The new and improved photo of the picture in question shows greater finish, but I still doubt it is by Dolci.

Kindly note I wrote to Prof Francesca Baldassari about this painting. As mentioned above she is the leading authority on Dolci and artists from his circle. Whilst she agreed with me that the painting is Florentine dating to the 1650s, she said that the painting is "very close to the young Florentine painter Alessandro Rosi". To be sure, she must see it in person.

Rosi (1627-1697) was a pupil of Vignali and Cesare Dandini. The head of the St. Benedict in the picture below resembles our St Jerome:

Another bearded saint by Rosi:

For some reason, the image shown with this discussion looks different on different computers. On the one I am using right now, it looks abnormally yellowish and slightly blurry, which is not how it looks when one opens the separate entry for the picture on Art UK (which is how it looks on a different computer to me). This may be a problem for interested parties, such as in Italy, who could contribute to the discussion given an optimal image.