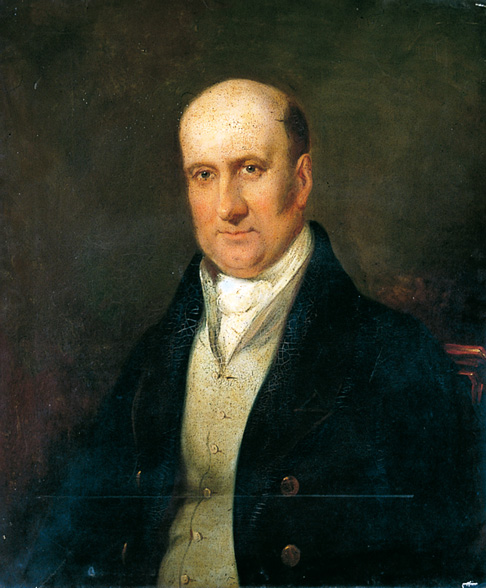 The Leeds Mercury newspaper for 15 November 1845, reported on a recent public meeting held at the Court House, Knaresborough. At that meeting Samuel Powell received a testimonial from the people of the town in recognition for all of his good works over preceding years. At the end of the meeting Mr Powell was presented with a silver salver and a portrait of himself. The article stated that "Mr Howell was the artist selected, the happy effort of whose pencil has produced a most admirable likeness." Surely Mr Powell would have received more than a pencil portrait? The answer may lie on the frame of the painting at Harrogate, as the portrait he was presented with bears the following inscription - "This portrait of Samuel Powell, Esq. presented to him after an honourable career of half a century...." etc. Could the owning institution please check whether the frame of their painting bears such an inscription? If it does then this work can be assigned to the hand of Samuel Howell (1809-1878).

The Collection has commented: ‘Unfortunately, the painting has been reframed so we are not able to identify it by the inscription on the frame.’

Alistair Brown, Art UK has added: ‘The 1845 portrait mentioned by Cliff must refer to Samuel Powell (1778-1859), in which case the sitter would have been 67 years old at the time. So either this is an earlier portrait of him or it is his son Samuel (1800-1883).’ [It should additionally be noted that there is a portrait of ‘Ann Powell, Wife of Samuel Powell’ just before this portrait in the Mercer Art Gallery Accession Register https://bit.ly/3r1OpCD which is the same size. The wife of Samuel Powell (1778-1859), was Ann Bolland (1779-1868)]

In the newspaper article of 1845 the word 'pencil' is probably being used in the old-fashioned sense of brush.

The dress looks earlier than 1845 to me, but Lou Taylor should be consulted in the matter.