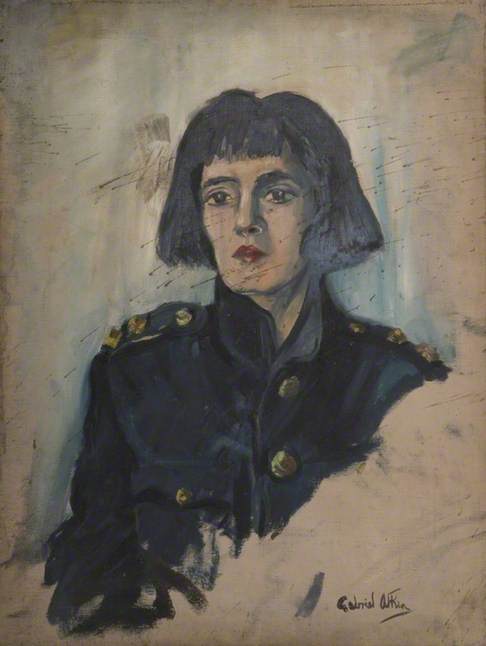 The collection comments: ‘It certainly looks quite like Kate Cutler in that role.

I have altered the title to “Portrait of a woman, possibly showing the character ‘Trilby’”.

The picture description is as follows:

Both actresses wore a man's uniform jacket as part of their costume.’

Although the sitter's hairstyle is similar to Kate Cutler's, her facial features are not. The portrait must date from the 1920s, by which time Cutler was in her 60s. Daphne du Maurier, however, was in her 20s and sporting a similar haircut and a closer resemblance to the woman in the portrait (see image attached to my previous posting).

Someone might be able to find a link between Daphne du Maurier and the artist, Gabriel Atkin, who was known to have been moving in literary circles at the time that the portrait was painted.

A woman wearing a man's uniform jacket seems a tenuous reason to think that she is anything to do with 'Trilby', even when her hairstyle is similar to one once worn by the grand-daughter of the man who originated the character. The hairstyle was also sported by several million other people - it was the fashion. Gabriel A(i)tken moved in very 'alternative' circles, not just literary ones, and I am sure such a get-up would not have been unusual there. See http://bit.ly/2vlFkdY

Other than the hair shape there is no resemblance to Daphne du Maurier at all. DdM was in her teens for much of the 1920s (21 in 1928) - this is a far older woman, look at her neck; the hair colour is completely wrong; her prominent cheekbones (or sunken cheeks) & mouth size and shape are quite different to Daphne's; and DdM had no hint of the large chin cleft we see here. I suppose if Atkin was an even worse artist than I take him to be it might just be possible...but I'm not convinced enough to pursue the hypothesis further, sorry.

There was a loan exhibition of paintings by Atkin at the Laing in 1940 - presumably this is when the painting was acquired and I would think the title would be listed in the catalogue.

The Laing must have a copy of the catalogue in its archives?

Thanks for the 1940 exhibition catalogue reference, Tim, that is most helpful.

Osmund commented that "a woman wearing a man's uniform jacket seems a tenuous reason to think that she is anything to do with 'Trilby'". I disagree. Combined with a 'Trilby' haircut, the signature military jacket is standard issue in depictions of the character, from George Du Maurier's original illustrations to the novel, right through to stage and screen adaptations of the role. I was unable to identify any actresses of the 1920s or 1930s who portrayed the character and shared the same facial features as the woman in Gabriel Atkin's portrait, but I did think that the sitter did bear some resemblance to Daphne Du Maurier, who incidentally did have a cleft/dimple chin (see attached photo). Du Maurier had a particular affection for her grandfather's work - in later life she published a collection of his letters, and it therefore seems no accident that she was to sport a 'Trilby' haircut and a military jacket at different stages of her life.

The 'military jackets' in the various 'in-character' Trilby images are all theatrical flummery, while that worn in the painting looks more like the real thing - but what? Epaulettes with'two pips' are those of an army lieutenant (on khaki) or (on blue, with the letters RM below) a lieutenant in the Royal Marines. Two silver pips (and these looks more gold) are those of a police inspector: all these for the period are male. This also looks like an 'undress' working uniform of some sort wit its soft rather than board epaulettes.

Aitken married Mary Butts and lived with her in Sennen, Cornwall from about 1932 - 1934. du Maurier lived further up near Fowey (most of the time from around 1926-32/33, then the next 10 years after marriage only during holidays).
If its her and painted then/there, she would have been 25-26.

Thank you for the detailed information about the military jacket, Pieter. This would suggest that rather than an actress in character, it is a portrait of a woman inspired by the Trilby look.

And thanks for a possible Cornwall connection between Atkin and du Maurier, Jon. Looking at the NPG's portraits of Daphne du Maurier, she appears to have stopped sporting a Trilby-style haircut by 1930. The portrait could have been painted by Atkin in the 1920s or 1930s, but if the sitter is du Maurier, then it would probably have to date to before 1930. Even so, it is interesting to note that their paths may have crossed after this date.

This discussion has attracted 6 comments over three days in 2017, 31 July to 2 August. It asks two questions:
Is this a portrait of Daphne du Maurier?
Can you find a link between du Maurier and Gabriel Atkin?

The discussion is about an unfinished painting in the Laing Art Gallery, possibly a left over from the loan exhibition of paintings by Atkin at the Laing in 1940 (post by Tim Williams). The discussion has attracted observations on the uniform jacket (post by Pieter van der Merwe).

As to the first question, there is no documentation. Opinion is divided as to whether this could be a portrait of Daphne du Maurier. As such the collections designation, “Portrait of an unknown woman”, should be maintained although it may be appropriate to mention the possible Du Maurier link in a text or catalogue entry relating to the portrait.

As to the second question both Du Maurier and the artist Atkin overlapped in Cornwall for a time, but were not neighbours (post by Jon Kemp). No link beyond this coincidence has been established.

A recommendation on closing this discussion needs to come from the Group leaders, Lou Taylor and Catherine Daunt.

Coincidentally, I looked at this discussion yesterday. The sitter reminds me of Luisa (Marchesa) Casati ( https://bit.ly/2Z87N3V ). Gabriel Atkin knew her and mentioned her in his unpublished memoir, which is in the collection of the Wichita State University ( https://bit.ly/3d47MGb ). I wrote them an email yesterday to ask if there is a chance to get a copy of parts of the memoir related to her. I will report back when and if I hear from them (or if this discussion is closed, send the info via email).

I had forgotten commenting on the uniform, the other (if remote) possibility I omitted being perhaps fire-service or something similarly civilian...

The jacket has 2 epaulette studs that could be in the shape of stars, with, it seems, some colour on them. So, possibly a ceremonial uniform. Can't see a match to the fire service.

Could this be a portrait of his wife Mary Francis Butts (1890–1937)? https://en.wikipedia.org/wiki/Mary_Butts

Could the sitter be Siegfried Sassoon ?

Gabriel's parents moved to Long Beach California- just after WW1.That must be why the Americans like him.
Gabriel's paternal granparents ,sea Captain William and Margaret (nee Gilbertson) Aitken- note spelling which is correct for them --came from Dunrossness in Shetland.

Title
Portrait of an Unknown Woman