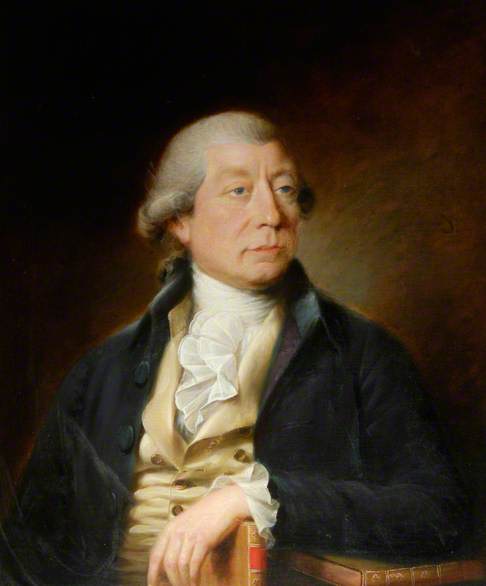 We have in our collection this painting of David Burton Fowler, and our records state that the artist is Francis Cotes (1726-1770). This is also reinforced by a plaque attached to the frame which gives the artist as Cotes.

However, the clothing worn by David Burton Fowler in this image only came into fashion in the 1780s and 1790s. Given that Cotes died in 1770, it seems unlikely that this was painted by him. Further, if it had been painted by Cotes, it would put David Burton Fowler at a maximum age of 34 in this painting: the sitter is clearly much older than 34 years old.

Does the style of the painting remind anyone of other artists, possibly London-based ones? We know he was in London working at the Exchequer office between 1779-1792, so a London-based artist seems likely.

Equally, the painting was in Canada before it was donated to us, so there is the chance that the sitter is not David Burton Fowler at all.
Unfortunately we're not able to give the information on the donor, though we can say that it was donated by someone from Sainte-Genevieve de Pierrefonds who possibly had links to the Oxford Group (later Moral Re-armament) and who travelled frequently between the UK and Canada.

The dress is probably too late for Cotes, but a costume expert should confirm that. The books are no doubt significant, but how does that relate to the purported sitter, or does it? A good American portrait painter is not out of the question, depending on the sitter.

Maybe by Lemuel Francis Abbott, though the image is not 100% clear and distorts when enlarged, so difficult to judge properly. Definately nothing to do with Cotes. Circa 1790 seems plausible.

Abbott is an attractive idea. I agree, not Cotes.

Abbott certainly did many half-length portraits with plain, darkish backgrounds, apparently his most typical format.

Abbott also seems to have painted this 1770 portrait of Sir James Eyre, who was a Baron of the Exchequer at the same time David Burton Fowler was working at the Exchequer office:

However, the date given on the James Eyre portrait seems off, as it would put Abbott at about 10 years old when he painted it. If the James Eyre painting is later (perhaps painted when he was appointed Chief Baron of the Exchequer in 1787), then there appears a plausible link between Abbott and David Burton Fowler, however this is just all conjecture!

Normally I would take the photo out of its frame and get a better close up, but it has just gone on display in a hard to reach place. I can try to get good close ups of certain areas if anyone would like some, but the glass means that I now can't get a HQ full photograph.

As a final note, I checked the painting before it went on display with a UV light and there were no signatures detected, however this painting has been cut down slightly and glued onto the current canvas, so it may have been lost when this was done.

I managed to find a higher quality scan of the painting. It's not the best but it's much clearer than the version above. I've attached it below.