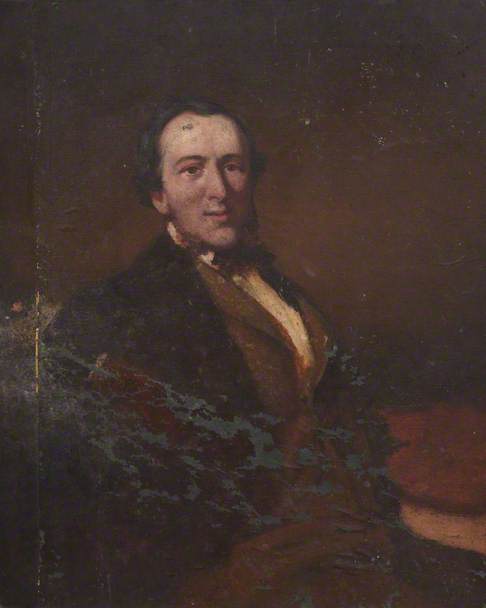 Could this be John Trimnell, a little later on from the following portrait, on which there has already been a long identifying Art Detective discussion?

As per the attached composite, a comparison of the faces show an initial similarity but there are also significant differences between this portrait and the other known portrait of Trimnell by Smith. The nose seems narrower and shorter in this painting and the lips are fuller. Also, the brown eyes in this painting are at odds with the light tone of blue or grey as suggested in the other. However, the hair parts in the same place and they both sport similar side whiskers, but this could just be mid-Victorian fashion. It would be hard to determine this sitter's identity without some additional corroborating evidence.

Given a bit of artistic variability, it's certainly plausible from the features, Pieter - but I think his colouring is wrong. Not only are the eyes much paler, as Kieran points out, but his hair is much fairer in Smith's watercolour. In fact looking at the latter again - the tone of all his hair, including eyebrows and sideburns, pale eyes, pale lips - I think John Trimnell could easily have been a redhead.

Thanks both: good points, esp the last even if not demonstrable. It just seemed worth floating but for other views but not worth spending more time on.

This discussion, “Is this a portrait of John Trimnell, friend of the artist Thomas Stuart Smith”, has attracted three comments, all dating to 2018. The comments suggest that the identity remains uncertain. As the new Group Leader for 19th century British Portraits, I suggest that that the discussion should now be closed. Michael: as Scotland: Artists and Subjects Group Leader would you be content for me to recommend that this discussion be closed?

Apologies to Michelle for getting her name wrong in my 11 October post. Do we have tacit agreement that this discussion now be closed?

I've emailed Michelle, as she may not be receiving these notifications as intended.

It's unclear whether the collection was contacted about this discussion in early 2018. I've asked if they could add anything before we close it.

Acquisition method
bequeathed by the artist, 1869