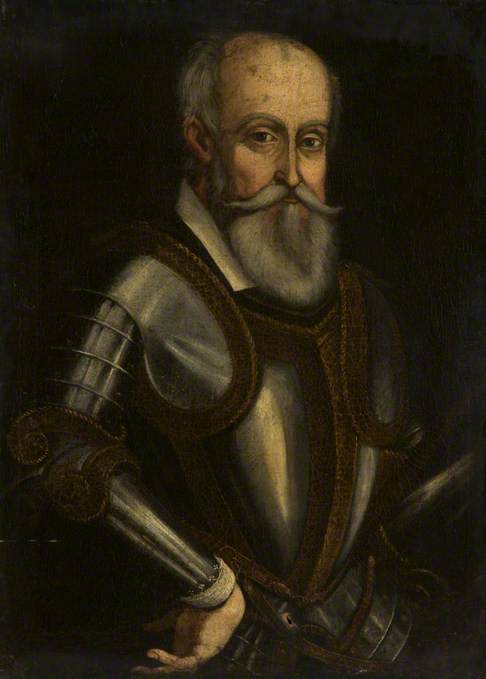 The identification of this sitter as Sir Thomas Gresham seems doubtful. This does not seem to be the same man as in the portrait of him in the National Portrait Gallery, and the representation of this man in armour also raises doubts. Who else could be the subject of this portrait?

For reference, here is the portrait of Sir Thomas Gresham at the National Portrait Gallery: http://bbc.in/2de3JJf

The collection note: 'To offer a bit more background the label with this painting states;

The first thing to note is that the date given for Gresham's death is incorrect. He died in 1579. The second thing to note is the unlikelihood of Gresham being portrayed in armour. He had no military experience, and was severely encumbered from early adulthood by a mis-set broken leg, making military activity even more unlikely. On this basis, I would also question the labeling of this portrait as of Gresham. It would be interesting to trace the provenance of this picture, if known; it might provide clues to his identity and/or the painter.

At first I thought, why not? as it could simply be an older Gresham - and we have no way of knowing what happened to his hairline. But Googling around, I found this image of Thomas Tresham, of Triangular Lodge and Lyveden New Bield fame - and dedicated encloser of common land. Perhaps that's why he needed the armour. Look at the eyes, eyebrows, the ears (smaller lobes than Gresham in the established portraits), the angle of the moustache, a straighter nose than Tresham's. The period is right. So maybe it was a simple misreading at some point in a catalogue.

Judith Martin has my vote . . . Mistakes like G for T easily happen!
Add the heavily receding hairline - exactly right for a more agéd Tresham, and similarities in armour –

Is that it then?! A decision? Anyone know what Salford says, or how they came to own it? I suspect we're looking at a Catholic/recusant connection with an historic donor. At least Salford is nearer to Northamptonshire than it is to London.

Neither Gresham nor Tresham had reason to wear armour. Suggest this is a copy of a grander picture of Charles V, Holy Roman Emperor (1500-1558) whose reign was dominated by wars. The decorated armour with the simple white collar (not a ruff) has many similarities to the uniform seen in a Tintoretto painting "Man in Armour" in the Kunsthistorisches Museum, Vienna, c.1550. Charles V is often depicted as having a long face, long thin nose, full thick beard and moustaches - these features are well displayed in the mystery portrait. Perhaps Charles V is worth exploring further?

Not entirely convinced this is Charles V, he doesn't seem to have had such a hairline for one thing. Though, of course, this work may be several times removed from an original image.

The disposition of the proper right hand is interestingly casual and unusual,

The Rijksmuseum has Antonio Moro's portrait of Sir Thomas Gresham (and its pendant of Lady Gresham), and it can be seen here: http://hdl.handle.net/10934/RM0001.COLLECT.4638

The physiognomy of the Salford portrait is not inconsistent with that in the Moro; but I don't think one can say more than that. The Salford picture is bad, and perhaps a copy after something else. It certainly does not portray Charles V, in my opinion

There's a strong similarity to this portrait of Alfonso II d'Este in the Met.

Try this link to the print in the Fitzwilliam:

That didn't help, so try this link:

Certainly, the picture in question is a better match for Alfonso d'Este than for Gresham.

Sorry about the broken link - it does work if you copy the whole thing and paste it into the browser. Is there something going wrong with Detective that it breaks pasted links?

Whether or not our picture is of Alfonso d"Este, it is not of Gresham, who was never a military man, so there is no justification for portraying him in armour.

Al Brown's parallel example, the Sanchez Coelho portrait in the Met, NY, makes a pretty convincing one that the Salford sitter is intended to be Alfonso d'Este, and after the Met picture or a version/copy, or a print from it. The armour is simplified as more 'field' than 'parade' but the pose is effectively the same as well as the features. In terms of general model the Met example relates to Sanchez Coelho's similarly parade-armoured portrait of Philip II.

Since the Salford picture does not fit either Gresham or Tresham, but fits Alfonso II d'Este very well indeed, then it is at least a case of "se non è vero, è ben trovato." I very much doubt we will do any better than Al Brown already has, and I think the matter can be closed.

In support of Judith - Sir Thomas Tresham is seen wearing armour in many of his paintings and it certainly is the same style of armour for the time, the exaggerated scrolls on the arms, the small amount of lace around the arm cuffs, the intricate bead work on the elbow decoration.
My own opinion- this painting does not look very good and lacks the standard other painting by Sir Anthony Moore - the flat composure and single dimension just mutters amateurism to me. His portrait of Elisabeth de Valois has layer upon layer of highlights and I struggle to believe both portraits were painted by the same artist

Just looked at the painting of Alfonso II d'Este - very convincing and a much better portrayal of the sitter.

Well spotted, Al. Yes, clearly based on - or sharing a source with - the portrait of d'Este at the Met, NY. Though the latter has nicely-detailed armour, the face is fairly pedestrian suggesting it's also a copy (though immeasurably better than ours) - the Met just attribute it to an unknown late C16th 'Ferrarese Painter'. Attached are the two portraits side-by-side, with rotation and size adjustments to enable a direct comparison. Virtually everything - even small hair details - is the same.

Also attached is a comparison of the lower body of ours vs the print at the Fitzwilliam. Again there are striking similarities in the hand and even tiny details of the armour and accoutrements (much closer than Coello's Philip II) that suggest Al has again found a convincing source.

The narrow format** and formulaic depiction remind me of the portrait sets of kings and queens once commonly found in the long galleries of great houses (e.g. https://bit.ly/2Ys1mur). This is larger, and being on canvas the date (if British) would be later, but could this have been one of such a set showing European sovereigns? Catherine Daunt (https://bit.ly/2YqZqT1) has studied these in depth and might have an opinion.

**Edit: I find that the image on Art UK is (not for the first time) misleading. Our painting’s measurements are in fact exactly 33 x 25 inches, and its proportions 1.32:1 - nothing like as narrow as the image shown here which is 1.39:1. It’s actually precisely three inches less in both dimensions than a kit-cat, the standard canvas size (post-1690s) it most closely resembles, and whose ratio is not far off at 1.29:1. From what we see it’s clear some reduction/cutting down has taken place, especially on the RHS, but it’s impossible to tell how much of that is in the flesh and how much is in the deficient image. Either way it is not so narrow a painting as I’d thought, and the analogy with the monarch sets much weaker.

So, in short, it looks like the body pose in both 'our' relatively poor oil copy and the better oil version in the Met follow the clearly younger (Fitzwilliam) print image of Alfonso d'Este, with ours closer to it in the pattern of the armour and the Met's armour more elaborated in the chasing.

If this goes any further the issue might now more usefully be the identity of the artist of the Met oil - or its 'original' if its a copy. The subject of 'ours' is beyond reasonable doubt the same - i.e. d'Este (not Gresham, Tresham, Charles V ...etc) - and the artist probably not identifiable. As Osmund says, the size may suggest its c. 1700-plus if cut down from a 36 x 28, but perhaps there are other thoughts on that too,

As a side note: the armor worn by Alphons d’Este in the Met portrait still exists and is in Castle Ambras, Austria. https://www.khm.at/objektdb/detail/373198/

Could the breastplate in the Salford portrait be a rather crude depiction of the actual breastplate?

One comment on an element that concerns me; while there seems to be no doubt of the connection between the Salford and Met paintings and the print, none of the other images of the older Alfonso show his hairline so receded.

There are other similar portraits:

This portrait has a known painter, Cesare Aretusi:

Fascinating to see what may be the very armour worn in the Met version: 'halber prunkfeldharnisch' doesn't translate via Google very well ('half pageantry/pomp field armour'). It looks like it has a rest for a lance so may be armour for the tilt (i.e. jousting) but perhaps someone with specialized armour or German expertise could clarify. Applying the Occam's razor principle, the simplest explanation for that shown in the Salford version is that it follows the print, though perhaps not directly since that would beg the question of where the older head put on top came: i.e. the Salford version is either the first to combine two different elements or a copy of another version in which that was already done. The latter may be more likely if one accepts that the Salford artist was at least competent enough to have replicated the more elaborate chasing pattern had that been present in what he was working from.

It looks nothing like 'Alfonso II d'este in his portrait in Wikipedia ...as by Girolamo da' Carpi.

The picture by Girolamo da' Carpi is of a very young Alfonso d'Este, while our picture is from the end of his life. Time can be unkind.

Rbt, it is important to see Wikipedia as only a starting-off point for research. Further investigation quickly reveals that the portrait you have drawn our attention to, which is in the Museo del Prado, Madrid, is no longer considered to be by da Carpi, nor of Alfonso II d'Este. See https://bit.ly/2yRsOCM. In fact it is not clear who ever thought it was or why - older catalogues (going back to 1746) had no idea who the sitter was, and attributed it to Bronzino. A closely-related version (same artist, same sitter) in the Museo di Capodimonte (https://bit.ly/2YVE7sf) is securely attributed to Daniele da Volterra and has a history going back to 1600 - and even then its sitter was unknown.

In any case, even if it *were* of Alfonso II and by da Carpi (who died in 1556), it is a portrait of a young man and would have to show Alfonso (b. 1533) in his 20s. Our portrait is thought to show him (at several removes) in much later life after he'd lost his hair and grown a big beard - probably 40 years later. Would that be an impossible change to contemplate?

As often Jacinto makes the main point more succinctly and at least as effectively as me!

I'd like to ask ArtUK to see if Kate Eustace could spare time to wind this one up, assuming she agrees it is most reasonably identified as Alfonso II d'Este 'in later life'.

I've emailed the relevant group leaders, inviting someone to take the lead on this.