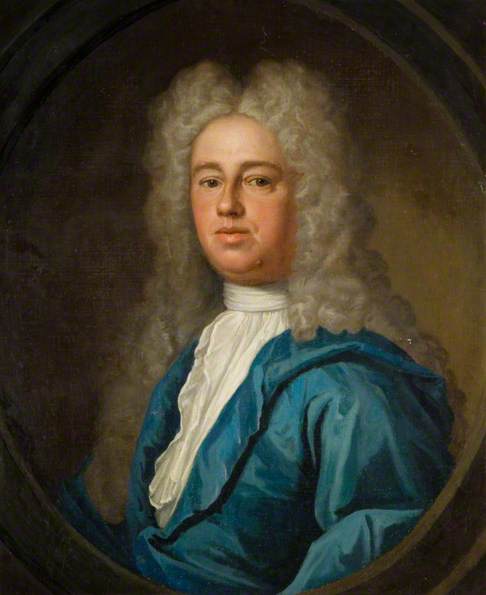 Tamworth Castle has recently found that both of these portraits were painted by Godfrey Kneller, early 18th C.

The Willingtons lived at Hurley Hall near Tamworth. The grandfather of Waldive, Waldyve Willington (note the difference in spelling), was appointed Governor of Tamworth Castle by Cromwell during the Civil War of the 17th C. He can be seen on horseback with a bird of prey on his arm in this painting: http://artuk.org/discover/artworks/hunting-scene-18693

The collection cannot be certain which generation this Mr Willington belonged. Can anyone find evidence to confirm the identity of the man in this portrait?

Tamworth Castle is not able to respond to requests for further information, but has asked to be notified of the outcome of this discussion. The collection looks forward to learning more about this painting.

Please note, a related discussion regarding the portrait 'A Member of the Willington Family' can be found here: http://www.artuk.org/artdetective/discussions/discussions/is-this-a-portrait-of-waldive-willington-or-his-son-is-it-by-godfrey-kneller

This discussion is now closed. The sitter has been confirmed as Waldive Willington (1677–1733) and the date amended to c.1710.

There appears to be some confusion in the above entry - according to Elizabeth Hodges 'Some Ancient English Homes and Their Associations' (published by Unwin, 1895) the sitter in the equestrian/falconry picture is Waldyve Willington (b.1677) the THIRD grandson of the Cromwellian governor. (see attached)

This painting looks to be of someone aged somewhere around forty and painted c. 1700-1710, so can only be the generation of the grandsons of the governor of Tamworth Castle, i.e. Wiliam (b. 1666), Thomas (1674-1718) or Waldyve (1677-1733). If it is a pair with a portrait firmly identified as Martha then it must be Waldyve, b. 1677, who married Martha Hervey. The marriage date would give an earliest date for the portraits. (The governor Waldyve d. 1676 and his son Waldyve d. 1677. All dates, genealogy and spelling 'Waldyve' from Burke's Landed Gentry.)

Peter Horton.
I am the current owner of Hurley Hall and have had copies done of all the portraits featured most of which have been put back in their original positions within the house. This has been carried out by reading inventories of the house dated 1736 and 1752. Most of the information I have has been obtained with help of the staff at Tamworth Castle. I have always understood the portraits to be of Waldive Willington and his wife Martha unfortunately I am yet to find their marriage date.I attach some further information and a portrait of what I understand to be of Martha and one of her children.The signature on Waldives will 1733 is with an i not a y.

Even in the absence of a precise marriage date, the most plausible conclusion seems to remain that this is Waldyve Willington (1677-1733) of Hurley Hall. Assuming he married around the age of 30, this would fit with the paintings of him and Martha being 'marriage portraits', or soon after, dating from around c. 1705.

This entry is copied from that as posted on the discussion page of the other possible painting of Waldive Willington in the Tamworth Castle collection:

The attached clipping, from the Tamworth Herald of Saturday 03 February 1945, might help with the identification of this painting, and the two portraits mentioned are likely to be the known ones by Kneller.

Also, on the basis of the following list of children born to Waldive Willington and Martha Harvey, their marriage date would most likely have been about 1711 or 1712, eleven or so years before Godfrey Kneller's death.

As will be seen from the records below, that all but the last of Waldive and Martha’s children were baptised in London might be as a result of the Harvey family being resident there.

Waldive Willington of Hurley Hall was born on the 26th December 1677 and died, aged 56, on the 10th September 1733. At about the age of 34 or 35 he married Martha Harvey, daughter of Richard Harvey of London, and they had the following eight children:

7. Martha Willington (Baptised on the 28th October 1723 at St. Antholin’s, Budge Row, London; buried at St. John the Baptist-on-Wallbrook on the 6th November 1723, aged one month).

As also referenced above in the first submission to this discussion, the attached clipping, from "Some Ancient English Homes" by Elizabeth Hodges (T. Fisher Unwin, 1895), might help with the confirmation of the identity of the other painting on the ArtUk website from Tamworth Castle, of the mounted falconer:

As stated therein, this hunting scene depicts Waldive Willington (1677 - 1733; husband of Martha Harvey) as a young man, and not his grandfather Waydyve Willington, former Parliamentarian Governor of Tamworth Castle (1600 - 1676). Perhaps an updating of the title of the paining might be considered.

The evidence points firmly to the subject of this painting being Waldive Willington (referred to as 'Waldyve Willington' in Burke's Landed Gentry) of Hurley Hall near Tamworth who was born on 26th December 1677 and died on 10th September 1733. At about the age of 34 or 35 he married Martha Harvey, daughter of Richard Harvey of London. The painting is likely to date to circa 1710. It is recommended that the title of the painting be amended accordingly.

Thank you, Grant. I look forward to hearing from the collection.

The collection would like to amend the existing title as it provides the information that they were missing and to thank us for our time in providing the update.

Acquisition method
acquired via the Wakefield Bequest, after 1992