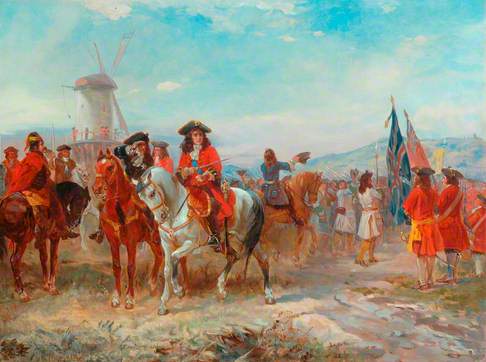 The uniforms are too late for the English Civil War. Most likely this depicts the triumphant meeting of John Churchill, Duke of Marlborough and Prince Eugene of Savoy after the Battle of Blenheim.

The British troops are self evident, but I believe they are being greeted by white-coated Austrian musketeers and there is an Hungarian Hussar in attendance on Prince Eugene. The high ground in the background is probably the hills bordering the Valley of the Danube. Additionally, there was a windmill depicted at Blenheim village and Marlborough was usually depicted on a white mount in paintings of the Battle. I attach another painting of the Battle by Hillingford.

Also in 2014, Col Dr Mike Snook, MBE told us that this may conceivably depict a scene from the War of the Spanish Succession and suggested dating it sometime between 1700 and 1720.

Agreed, though windmill suggests the Low Countries. Was there really a windmill at Blenheim village? Otherwise it might depict the battle of Malplaquet or Oudenaarde.

The details seem convincing. Here are some other Blenheim paintings by Hillingford in which the Duke of Marlborough is depicted similarly (although the battle was 1704, obviously the painting itself isn't 1700-1720!).

Not my area save to point out the hazards of long-post-facto history painting, since the Union flag-pattern shown is post-1801, with the St Patrick red Irish saltire only then inserted: if it shows Marlborough my immediate question is when he became a Knight of the Garter, since wearing its blue sash.

In the reign of Queen Anne, who appointed him Master-General of the Ordnance and Captain-General of her armies at home and abroad, John Churchill, 5th Earl and later 1st Duke of Marlborough, was installed as a Knight of the Garter on March 13th 1702. He died in 1722.

Most certainly not my area, but I would imagine the presence of the windmill alone would argue against this being set in Britain.

This may be of interest:

I suspect that the only precise resolution here will be to find -if it exists - a specific exhibition entry or press comment on the picture.

The suggestion that its shows the 'Meeting of the Duke of Marlborough and Prince Eugene after the Battle of Blenheim, 1704' seems an entirely reasonable one, unless anyone knows another such rendezvous between them that could have prompted Hillingworth to do it: given that a mill was part of the recorded scene at Blenheim (though there was probably at least one in sight everywhere else Marlborough fought) it seems pointless to speculate further on geographical 'might be's'.

There are a number of similarities to elements in Laguerre's paintings at Marlborough House - although the Churchill depicted is wearing a grey wig rather than a brown one.

There's a windmill in Wooton's painting of the siege of Lille also,RCT

Typical Hillingford painting of a Marlborough scene. In my 1993 book, British Artists and War, I list no fewer than ten paintings by him of the Duke in the War of the Spanish Succession, and I've found more since then (unfortunately my Hillingford folder is locked in my office at the university so don't know when I'll get access to it).

Thanks for the comment, Peter - I was just completing the following based on your book:-
There are a number of paintings by Hillingford depicting the 1st Duke of Marlborough in the War of the Spanish Succession listed in Peter Harrington's 'British Artists and War' (1993), that were in private collections at the time of publication. There is a work entitled 'The Duke of Marlborough and Prince Eugene before Malplaquet', but, at 61 x 91.4 cms, its measurements are not compatible with this picture. From the point of view of dimensions, 'Marlborough signing the despatch, Blenheim' at 46 x 61 cms works, but he is certainly not signing anything here. However, Hillingford clearly enjoyed depicting this period. Of the 47 paintings listed by Peter Harrington by this artist, covering the period from 1573 to the Crimean campaign, some 10 show 'the Marlborough period'.
With regard to the windmill and also the depiction of Marlborough on a grey horse, please see the National Army Museum's near-contemporary painting of Blenheim by John Wootton, https://artuk.org/discover/artworks/the-battle-of-blenheim-13-august-1704-183088/view_as/grid/search/venue:national-army-museum-6956--works:the-battle-of-blenheim-13-august-1704/page/1
which show neither. However, it does seem to have become a signifier of Blenheim among late nineteenth century battle painters. So it seems most likely that this work depicts Marlborough and Prince Eugene at Blenheim.

This is highly likely to be another picture of Blenheim. Hillingford also painted two pictures of the Battle of Ramillies (1706), although he was rather more prone to depict scenes from the Napoleonic Wars.

'Marlborough signing the dispatch, Blenheim' was linked above and also shows a white horse and dark wig:

Speaking as an artist myself, I can assert that Hillingford entirely invented the scene (150 years after the event). Windmills were common throughout Europe (even in Britain!) and the mill is placed merely as a prop to aid the composition. I doubt that he visited the battlefield of Blenheim (in Bavaria), so no reliance can be placed on the topography depicted in the painting. However, most of Marlborough's campaigns were in the Low Countries (pretty flat) and so the hilly background indicates that he intended the picture to be the 1704 campaign in southern Germany (which culminated in the storming of the Schellenberg (2nd July) & the Battle of Blenheim (13th August). It's a scene during the morning before a battle, because there is no smoke from burning villages and mills. As to the white coated troops,besides the Austrians their Allied army included infantry battalions of Hesse-Kassel, Luneburg-Celle, Wurttemberg & Saxe-Gotha, besides Hanover, Prussia, and Swiss regiments of the Dutch Army. Hillingford depicted some white-coated infantry for variety, and I don't think his knowledge of foreign uniforms allowed him to be too specific as to which were intended. Eugene & Marlborough met on 5th & 11th August. On the 12th at Tapfheim they reconnoitred the enemy position; & on the morning of 13th August they made their final plans together for the attack at on the enemy at Blenheim. I think this is the moment that Hillingford intended to depict.

The absence of 'post-battle' damage was the one thing against 'the' (or 'a') 'Meeting of the Duke of Marlborough and Prince Eugene after the Battle of Blenheim, 1704', but substituting 'before' for 'after' resolves that objection.

I would recomend that it would be safer to say, as Jenny suggests, 'Meeting of the Duke of Marlborough and Prince Eugene at Blenheim, 1704', without being specific as to before or after.

Even better, pending an 'artist title' perhaps turning up at some future point -which it may help: current title doesn't.

The windmill, the white horse and its rider appear to be William of Orange. The Union Jack flag was a standard of William of orange?

Interesting idea: the horseman in blue (hitherto our Prince Eugene figure) wears a star on the left breast and is saluting the figure on the white horse, which might pass as Willem of Orange/William III. (When did he become KG?). Though William is generally associated with riding a roan, a white horse is a symbol of kingship and many contemporary images show him on one. If it were William, and on campaign with English troops, the question would be when/where: presumably in the southern Netherlands vs. Louis XIV or in Ireland (c. 1690, pre- Boyne). Here he is on white horses at Namur:

Enlarging the Union flag still seems to suggest the present artist got it wrong by including the (post-1801) St Patrick red saltire -but only a clearer detail would confirm that.

Here is another painting of the siege of Namur ( or Namen) in the Ipswich Borough collection.. King Billy is on white horse with orange coat on. Unfortunately it is wrongly labelled as Marlborough at the siege of Oudenarde-- sad face :-( .
https://www.artuk.org/discover/artworks/the-assault-on-the-town-of-oudenarde-belgium-11533/view_as/grid/search/keyword:oudenarde/page/1

I think there is still a consensus, and I would formally recommend, that, as Jenny suggests, the best tile would be 'Meeting of the Duke of Marlborough and Prince Eugene at Blenheim, 1704', without being specific as to before or after.