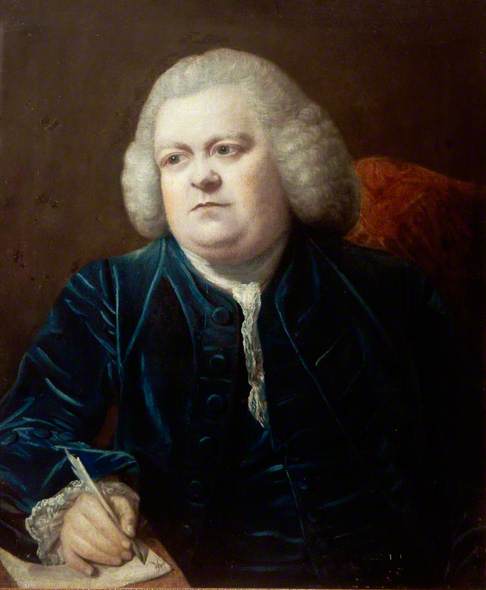 Provenance: This painting is part of Newcastle University's Pybus Collection. Professor Frederick Charles Pybus (1883–1975) amassed a collection of items (including paintings, books and artefacts) relating to the history of medicine. This painting was purchased from Sotheby’s on the 15th of May 1960 LOT 204. An extract from the sale catalogue is attached to the stretcher and reads: ‘SIR JOSHUA REYNOLDS, P.R.A. /204. PORTRAIT OF P. POTT, ESQ., the surgeon, half-length, wearing blue costume, white lace cravat and cuffs, seated at a desk./29¼ in by 24¼ in./The subject gave his name to Pott’s fracture.’ There is no indication of provenance.

The painting is not, as far as can be ascertained, in Cotton’s list of Reynolds’ sitters compiled from his pocket books* and it is not recognised in David Mannings’ Sir Joshua Reynolds: A Complete Catalogue of his Paintings, Yale University Press, 2000.

*NB: Reynolds is known to have painted Pott in 1784, as that painting is listed in Cotton in italics, but not the date of the sitting, which seems to indicate that the painting is known but the sitting is also unrecorded in the pocketbooks.

The Sitter: Percivall Pott (also Percival Pott: 1713–1788) was a renowned surgeon of his time. In 1729 he became master of anatomy to the newly formed Corporation of Surgeons, going on to be master of the corporation in 1765. In 1749 he became a surgeon to St Bartholomew’s Hospital, London. In 1756 he suffered a compound fracture of his leg (still known as Pott’s fracture), and rather than the then common practice of amputation had the leg successfully realigned. He resigned the office of surgeon in 1787. From spinal disease to TB to cancer, Pott had significant influence. His works were collected in 1775.

These paintings do not bear a strong resemblance to this discussion's painting which has led to queries being raised over the identity of the sitter. Another suggestion is that, stylistically, this work is close to Reynolds’ style of the 1750s so this is a much earlier representation of Pott, perhaps marking his becoming the surgeon to St Bartholomew’s or Master of the Corporation of Surgeons.

The stretcher: In addition to the Sotheby’s catalogue extract, the stretcher of the painting has a handwritten label with ‘P.POTT (1714/1788) / (POTT’S FRACTURE SURGEON) / By Sir Joshua Reynolds 1758 (?).’ There is also a faded black, handwritten inscription which seems to say “Dr Pott M.D / Joshua Reynolds” in the style of Reynolds’ handwriting/signature. Unfortunately, some of the wood near the signature is damaged making it difficult to read and photograph, also at some point someone has leant on the stretcher while writing a label and the indentations make the signature difficult to photograph. [Group leader: Bendor Grosvenor]

The wig and dress should be addressed for dating by someone like Lou Taylor. This could be earlier than 1750s.

I don't accept this is a Reynolds. I believe William Hoare of Bath may be a contender as artist? It is certainly more Hoare than Reynolds.

Could a hi-res of the black mark on the bottom right corner (as viewed) of the letter by posted?

At first glance it's either a Reynolds or someone in his circle copying his paint experiments. The Ghostly pallor is a dead give away. A Proper Inspection or in this case an Investigation of the Paint would either confirm or deny. I'm surprised nobody has done this. On first glance it's a REYNOLDS. On second Glance too. The Style and the Draftsmanship are first rate, there's not a hair out of place. To Me the only way this isn't a REYNOLDS, is if it is proved to be a Forgery. Which it might well be.

The collarless coat and waistcoat, the deep cuffs and the plain style of the wig would indicate a date between c.1735–1740 for this portrait, the dark blue, plain velvet suit indicating a professional man rather than a fashionable man. See close similarity to attachment 1, portrait by Hogarth, of George Arnold, Esq. of Ashby Lodge dated to 1738–1740, Fitzwilliam Museum. https://artuk.org/discover/artworks/george-arnold-5100/view_as/grid/search/keyword:george-arnold/page/1

It would also be very useful to have close-ups of the face and perhaps the back of the painting with the inscription.

It is a struggle to match the physiognomy to those known representations of Pott, even though this is an earlier portrait. I suppose it can't be ruled out of hand that it is Pott but perhaps just by a less competant artist.
Renolds by the 1750s was producing much better work than this. The only way it can be considered to be by him is if we believe that it was painted in the early 1740s and then the pose becomes problematical for a Reynolds of that date. I'm wondering whether it could be an early work by Robert Edge Pine. The ghostly Pallor Whaley mentions is a curious feature though.

Miles, here is a close up of the face. The inscription is one of the images supplied when the public discussion was launched. Regards, David

From the viewpoint of the sitter the mark on the corner of the letter could be read as a monogram combining J and R – but it is unlikely to be original.

Pott was 27 in 1740. This sitter looks rather older than that. I do not believe this is by Reynolds, and the Reynolds pallor is not the same as this picture's; it tends to look more unnatural.

Marcie: The painting in the background of the Paye self-portrait is not the portrait of Pott which is under discussion, if you look closely.

I agree, Betty. I was just adding to the list in the introduction of known images of Pott.

The portraits of Pott on line look fairly like each other, including the other Reynolds, but this one doesn't look like any of them. Different wig style, the modelling of the nose and under-eye area look different. It may be a Reynolds, but don't think that it's Pott.

I agree: this is not Pott as portrayed by Reynolds, Romney and Dance-Holland. It's not impossible that a man could vary the style of his wig but our sitter's face is broader and much softer in character than Pott's.

Marcie, the portrait of Pott in the background of Paye’s self-portrait, and of which he is making an engraving, is the fuller, three-quarter length version (or a perhaps a copy of it, given its small size) of Nathaniel Dance’s portrait of c.1783. I don’t know if the painting survives, but there is a copy of Paye’s print at the BM here: https://bit.ly/3FczkDF. The Hunterian’s half-length version (https://bit.ly/3JSMqd2) looks very oddly cropped on Art UK – that cannot be an image of a 75 x 62 cm canvas. See attached composite.

However, I fully agree that on both facial appearance and age grounds, our portrait cannot possibly be Percivall Pott. Moreover the inscription on the stretcher (which was certainly not written/signed by Joshua Reynolds) is at best a later addition. Note that it appears to be titled ‘Dr(?) Pott M.D.’ – but Pott was a surgeon, not a physician, and I can find no instance of him being referred to as ‘Dr’ or ‘M.D.’ in his lifetime or indeed afterwards (though oddly the Royal College of Surgeons today accords him a knighthood which he never had). This is no surprise: it was not until the end of the 18th century that it became normal for surgeons to have medical degrees – their training was generally by way of an apprenticeship, and it is as an historical nod to this that surgeons today are still called ‘Mr’ not ‘Dr’. This is hardly a mistake that would have been made in a contemporary inscription, let alone one by the artist.

My suspicion is that ‘Pott’ was a misreading (perhaps wilful) of a barely-legible name, and it was then doctored somewhat to read that more convincingly – see attached image, tweaked a little. A quick scan of Munk’s Roll of Physicians (https://bit.ly/33md0Ky) produces a couple of possibilities (there may be others), but I think they’d both be too young if the picture does date from 1740 or earlier – John Thomas Batt (c.1718–1762) and George Raitt (sometimes spelt Rait, ?1719–1785). Probably not worth researching further, as even if the sitter *was* a physician, the chances are he wasn’t one of any particular note. I’m afraid I think Professor Pybus was sold a pup.

What does Bendor Grosvenor think about the Reynolds attribution?

Osmund, to find out whether or not someone was knighted in the UK, is there some standard reference that can be consulted online?

Yes, there is indeed such a work, Jacinto - and actually I'm very grateful to you for reminding me of it. William Shaw's two-volume 'The Knights of England' (pub. 1906) is a "... Complete Record from the Earliest Time to the Present Day [in fact to the end of 1904] of the Knights of all the Orders of Chivalry in England, Scotland, and Ireland, and of Knights Bachelors". Knights bachelor are knights created outside one of the more prestigious specific orders of chivalry - the commonest sort, both currently and historically.

After 1904 you have to look to other sources - Who's Who/Who Was Who, for example, if you have access to it online; or the official London Gazette, which publishes notices of conferred titles, honours and decorations, and is searchable online: https://www.thegazette.co.uk/

Thank you, Osmund. That is most helpful.

I agree with what you said Jacinto in reply to my message on 7/01/2022.
I believe with what others have said also we can agree that it just isn't of Pott and neither is it by Reynolds.

Jacinto, I have emailed Bendor as requested. David

Title
Portrait of a Man Writing*