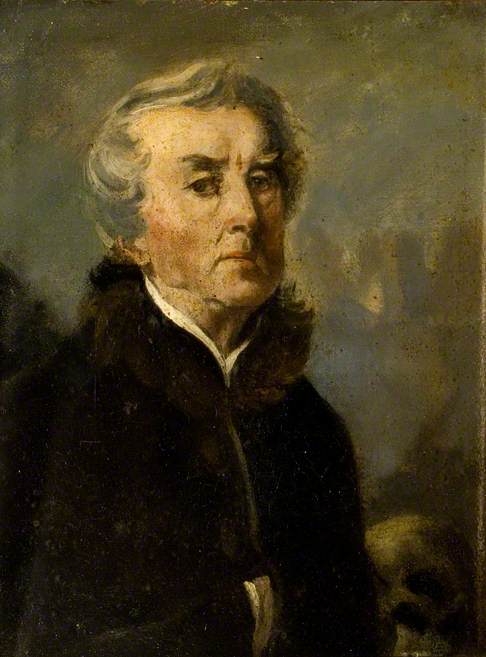 I am quite certain that this painting of John Morrison (1782–1853) is a self-portrait. There is a reproduction of it, credited as a self-portrait, in Alexander Trotter's East Galloway Sketches, or, Biographical, Historical and Descriptive Notices of Kirkcudbrightshire, Chiefly in the Nineteenth Century (Galloway: A. Rae, 1901). I have used a digital image of the reproduction at the top of the following biographical page: http://www.walterscott.lib.ed.ac.uk/biography/morrison/career.html

I am also attaching it as a (very small!) jpeg here.

John Morrison's primary career was as a land-surveyor (especially to Thomas Telford), but he was also extensively employed as portrait painter to the gentry.

Incidentally, this is the same John Morrison who painted the following picture of Sir Walter Scott:

These amends will appear on the Your Paintings website by the end of February 2015. Thank you to all for participating in this discussion. To those viewing this discussion for the first time, please see below for all comments that led to this conclusion.

This seems entirely plausible. It certainly looks like a self portrait and the resemblance to the print seems completely convincing

The work illustrated on the biographical page, while clearly the same sitter, is also clearly not the same work. There are a number of substantial differences: overall, the face is less gaunt, not all the background is included, and the arm is missing.

Is it possible to find out more about the illustrated work? The page notes "Self-portrait of John Morrison. Reproduced by permission of the National Library of Scotland" but not the medium.

The biographical page is based on research I carried out about 10 years ago. I'd need to visit the National Library of Scotland again and have look at the illustration their copy of Alexander Trotter's East Galloway Sketches. I should find an opportunity over the next couple of weeks. I've a horrible feeling that the information provided there is pretty minimal.

Good spot this Paul, an entirely convincing. It does indeed have the feel of a self-portrait about it. The discrepancy with the 1901 reproduced image can probably be explained by the fact that it was rather inexpertly copied for reproduction. And often these things, especially in sketchy self-portraits, were 'tidied up' for publication. That doubtless explains the omission of the skull too.

Thanks to the above comments, it begins to look like this is a 19C portrait. The identification as John Morrison must be right, as Paul Barnaby shows. The engraving is a good match, as Bendor suggests, smoothed out for reproduction. It also rings true as a self portrait as David Bindman has noted.
Given Morrison's testy personality, the expression makes sense. He seems to adopt the gaze of an artist of the Romantic era and looks displeased with the world and his place in it. By this time aged (at least) in his fifties, the portrait should be dated 1830s/40s.
Perhaps this discussion can be wrapped up, if everyone agrees.

The record on PCF, following the link to the picture of Walter Scott, takes one to the following, other, self-portrait: http://www.bbc.co.uk/arts/yourpaintings/paintings/john-morrison-215473

Aside from the technique being radically different, am not convinced they are of the same person - the nose in the one above is far duller in form.

I'm not convinced they are the same person either. I think I was a little hasty last week in attributing the Scott portrait to the John Morrison above. As you say, it is clearly derived from Raeburn. Morrison, however, definitely portrayed some of Scott's relatives and members of the Abbotsford household.

Thanks for these comments. The questions remain does the portrait of the older man with Dumfries and Galloway Council (The Stewartry Museum) show John Morrison and is it a self portrait. If the identification of Morrison depends on the engraving, then it is the same person. Is the painting by him, i.e. is it a self portrait? According to http://www.walterscott.lib.ed.ac.uk/biography/morrison/career.html the engraving shows a self portrait of Morrison. This seems to be confirmed by how the sitter portrays himself.
The portrait of the younger man named on the PCF (Dumfries Museum) as a self portrait of John Morrison is now introduced into the discussion. Confirmation would be needed about why this is catalogued as it is--signatures, inscriptions on the work, etc. Certainly this painting is much earlier--maybe c.1805.
Further thoughts?

The source for the identification of the engraving as a self-portrait of John Morrison is Alexander Trotter's East Galloway Sketches, or, Biographical, Historical and Descriptive Notices of Kirkcudbrightshire, Chiefly in the Nineteenth Century (Galloway: A. Rae, 1901).

Thanks, Paul. I was wondering about the identification of the other one--the oil showing the younger man said to be a self portrait by John Morrison at the Dumfries Museum http://www.bbc.co.uk/arts/yourpaintings/paintings/john-morrison-215473 (referred to in Al Brown's comment). Perhaps the Museum can comment on the source of that identification and attribution. It may just be a traditional one, but it would be good to know one way or the other.

Paul, you referred in your previous post to Morrison's portrayals of some of Scott's relatives and staff - are any of these on-line for comparison?

Without any new material pertaining to this discussion, I think we can sum up and conclude. The painting in the original query, the one with Dumfries and Galloway Council (The Stewartry Museum), shows John Morrison. This identification is confirmed by the engraving Paul Barnaby cited (Trotter 1901). Is it a self portrait? According to http://www.walterscott.lib.ed.ac.uk/biography/morrison/career.html the engraving shows a self portrait of Morrison. This seems to be confirmed by how the sitter portrays himself. So we can all agree that this is a self portrait by John Morrison. It is a step forward, thanks to Paul Barnaby, and gives us more information about the less well known artistic activities of a man primarily identified as a friend of Walter Scott. The painting probably dates from c.1830-later 1840s.

Can I just mention that the authority for identifying it as a self-portrait is the chapter on Morrison in Trotter 1901? I don't know if this is appropriate, but I noticed this week that Lyon & Turnbull are selling two portraits which are very probably by John Morrison:

While Morrison was drawing up an estate plan of Sir Walter Scott's property at Abbotsford in 1819-20, Scott commissioned him to paint portraits of friends and staff. The portrait above are of Scott's factor William Laidlaw and his wife Janet Ballantyne, signed 'Morrison, Abbotsford'. I suggested to Lyon and Turnbull that they may well have stemmed from this commission. I certainly can't think of anyone else who would have signed himself 'Morrison, Abbotsford'. Contributors to this thread might like to compare them with the portrait above (bearing in mind that they probably predate it by 20 years or more).

Thanks, Paul, for confirming that Trotter also says it is a self portrait. The paintings in the saleroom are interesting additions to the slim Morrison oeuvre.
We are still probably in a position to conclude the discussion on the oil self portrait in the collection of Dumfries and Galloway Council (The Stewartry Museum).

It's probably worth pointing our that the technique of the works on sale at Lyon and Turnbull is very different from that on display here. However that, in itself, could be explained by this being more of a sketch than a formal portrait - hence the "tidying-up" when it came to be engraved.

Are the collection happy for an execution date of 'c.1830–late 1840s' to be added, along with the artist changed to John Morrison and the title to 'Self Portrait'?

Coming rather late to this discussion, I have a residual worry about some, of least, of your conclusion, Alice.

(1) The Lyon &Turnbull portrait of William Laidlaw, by "Morrison of Abbotsbury", seems (as Paul explains above) almost certain to be by John Morrison.
(2) To my eye, the (other) 'Morrison self-portrait' at Dumfries Museum looks to be by the same hand. And it certainly looks like a self-portrait. I would conclude that this is indeed what it is supposed to be - but much later than c.1805. It looks like a man well into his 30s, and possibly even early 40s - implying a date of c.1820. In fact the same period when he was painting portraits for Scott.
(3) While I accept the balance of arguments for the portrait under discussion also being a Morrison self-portrait, I note that the only authority for this seems to be Trotter writing nearly 50 years after his death - that and our feeling that it is an appropriate self-image for a man of Morrison's character.
(4) If that IS what it is - and as I say, on balance I accept it - I believe it must be later than 'c.1830- late 1840s'. I think it was painted at the very end of his life, perhaps during a final illness - a sketchy self-portrayal of a man of 70 or 71 nearing death and aware of it, hence the memento mori skull pointed out by Bendor. And it would go some way to explaining the much changed, gaunter face from the earlier self-portrait (though not the prettier nose - a final outing for his famous vanity?).

Osmund's argument about the dating is very persuasive. Might I suggest a compromise on 'c.1850?' as a date? It would be good to have Barbara Bryant's comment on this before finally winding it up.

This morning, I finally had the chance to consult Trotter's 'East Galloway Sketches' again at the National Library of Scotland, it turns out that Osmund's suggestion is absolutely spot on. The self-portrait of Morrison reproduced in that volume was painted 'shortly before his death' and was inherited by his niece 'a Miss Melville' (p. 61). Morrison died in 1853 so c.1850 sounds a good shout. I'm inclined to accept Trotter's authority for the identification. Both he and his father before him were prolific local historians in Galloway, largely relying on information from a network of local families. Trotter doesn't say so in so many words but the implication is that 'Miss Melville' ('whom [Morrison] brought up, and valued highly for her congenial companionship') is his source for both the painting and some of the biographical information.

Regarding, the other self-portrait dated c. 1805, I agree that Morrison looks a bit older than early to mid 20s. People commented on his rather rustic and physically imposing appearance in youth, and he spent most of his working life out of doors, so I wouldn't exclude the possibility that he looked old for his years.

OK, to the above. My comments did allow for a wide scope of dating (up to later 1840s) but given the most recent arguments, especially as we now know that Morrison painted it 'shortly before his death', and since everyone agrees, then settle on c.1850.

Comment from David Bindman, Group Leader:
"I agree but I think we should now finally close this discussion. We have a clear consensus on this painting"

Happy with that too.

This discussion is concluded and should be closed

I just spoke to the collection over the phone and they are happy for me to make amends to the record that are not concrete. They still want to check through everything.