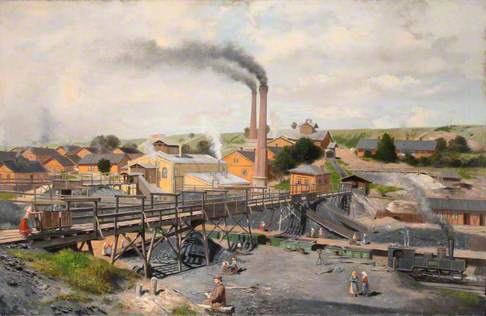 Can anyone offer or suggest any information about this painting in the Science Museum's collection. It has been dated as 1895, although it is not clear where this comes from as the artist is unknown and there appears to be no date on the picture.

Where is the 'Industrial Ironworks' of the title: is it a specific location or a generalised view, possibly even a modern painting made for a book cover or a museum display, showing a 'typical' 1890s industrial scene but painted up to a century later? Is the scene British? The steam locomotive on the right looks more like a European design. Could this be a scene in northern France or Belgium?

There are various women workers in the scene including one who miraculously appears to be pushing a tipper truck on her own to the left. Is this realistic? Even the famous pit brow lasses of Wigan didn't do that. Stylistically the painting doesn't have a late nineteenth-century feel about it, more of a modern recreation in the style of the Ladybird book illustrations c.1970. So is it just retro, or a genuine period piece?

The collection note: 'The Science Museum acquired this painting at auction in 1994 and the research carried out at that time records that the oil is signed indistinctly and has been deciphered to read "Eduaiï rd Kregczy" and it is also dated 1895. No information could be found on this artist at that time. Prior to purchase the locomotive was identified by our colleagues at the National Railway Museum (by style and name of locomotive) as being Hungarian. This does mean that we could potentially attribute this to Edmund Kregczy (1855–1916), born Olmütz. Though no authoritative reference has yet been found providing more information about the artist, Olmütz is known today as Olomouc, Czech Republic. This sits well with other information as Czech Republic is adjacent to Hungary and Austria.'

This discussion is now closed. The painting has been identified as a view of the Josef-Schacht (Josef-mineshaft), owned by the Zwierzina family in Mährisch-Ostrau, (now Ostrava, Czech Republic). It was painted in or around 1895 by Edmund Kregczy, whose mother, Rosa Zwierzina, was one of the owners of the mining company.

Thank you to everyone who contributed to the discussion. Special thanks to Andrea Kollmann for her research on the artist and the mine in local archives and through contact with a descendent of the Zwierzina/Kregczy family. To anyone viewing this discussion for the first time, please see below for all the comments that led to this conclusion.

I think the inscription on the lower right part of the painting reads “Edmund Kregczy” followed by some more unreadable text. There also is a date below the signature, which looks like 1895.

In March 1899, Kregczy exhibited a painting called ‘Skizze eines Steinkohlenwerkes’ (~’Sketch of a stone coal facility/plant’) in Vienna. A contemporary newspaper article about this exhibition mentions it as the no. 10 in the exhibition.
I wonder whether this painting could be called a 'sketch', but maybe there is a label on the back of the painting which refers to this exhibition?
I attach a close up of the signature and the article (it was published in Deutsches Volksblatt, March 5th, 1899).

Finding little to add, except for some biographical data:

The following lot picked up on Invaluable site adds his master:

Biographical summary for Franz Rumpler can be found here, if someone can translate it:

When I searched for industrielle eisenhütte Olmütz, I found this 1897 image of the Fürsterzbistums Ironworks in Olmutz. It is difficult to correlate the image with your painting, but the scale of operations is similar, especially when compared to the Vítkovice Ironworks in Ostrava.

You may not be aware of the dramatic shift in the economy of Moravia during this period. "The shift to the Gilchrist-Thomas process and low-grade Bohemian ore also made a great shift in the importance of the regions. In 1878 Bohemia and Moravia still only made 23 percent of Austro-Hungarian pig iron; in 1897 they made 57 percent of the much larger quantity manufactured and this proportion was slightly increased by 1913." Edmund Kregczy may have been a witness to the great economic change in his homeland.

I got in touch with a direct descendent of Edmund Kregczy who kindly provided information about Kregczy’s family and also offered to take photos of another painting of Kregczy in his possession so that we can compare signatures. He also thinks that the man in the foreground of the painting might be identifiable; he will have a look in his family’s archive and I will post updates when I get them.

Furthermore: Edmund Kregczy’s family owned several coalmines in Mährisch-Ostrau (today Ostrava), known under his mother’s maiden name ‘Zwierzina’. I have not yet found fully reliable information about these mines, but the two paintings in the attachment very likely show the same mine as in the above painting, which probably is the so called ‘Josef II’ mine located in Ostrava.

That's very impressive: it will be interesting to see a bit more about him in due course.

Finding reliable sources and information about this painting took a good bit longer than I had expected. I summarized my findings (plus sources and illustrations) in the attached pdf, but in short this is what I found out:
The painting shows the Josef-mine owned by the Zwierzina family in Mährisch-Ostrau, today Ostrava, Czech Republic. It was painted in or around 1895 by the local artist Edmund Kregczy, whose mother, Rosa Zwierzina, was one of the owners of the mining company.
At the time the painting was made, the company employed around 340 workers, among them 28 women, who worked above ground and whose tasks are shown in the painting. Also shown in the painting is a part of the 1.2 km long railway tracks running from the Josef-mine to the ‘Kaiser Ferdinand Nordbahn’, which connected the coal mines in Moravia and Silesia with the industrial centers of the time.

Edmund Kregczy exhibited two paintings of his family’s coal mines in a charity event (to raise money for the clothing of poor miners’ children) in Ostrava in 1895 and again showed one of these two paintings in an exhibition in Vienna in 1899. I am pretty sure, that one of these two paintings must have been the one in the Science Museum. It would be interesting though, whether there is anything on the back of the canvas to support this assumption.

Edmund Kregczy was born in Olmütz (today Olomouc, CZ) on 16th February 1855 and died in Vienna, Austria (10th August 1916). He studied at the Wiener Akademie (under Hugh Charlemont and Franz Rumpler) and at the Münchner Akademie (under Nikolaus Gysis), painted portraits and landscapes, nudes as well as religious subjects (I attach an illustrated newspaper article published in 1913 which shows some examples of his works). According to ‘Biographien der Wiener Künstler und Schriftsteller’ a lot of his paintings were exhibited, among others in Vienna, Munich, Hamburg, Dresden, Berlin and Breslau. He seems to have enjoyed some success as a painter in his lifetime. Several of his exhibitions in Vienna were mentioned in contemporary newspapers. In 1899, his solo exhibition was visited by the Emperor’s brother, arch-duke Ludwig Viktor. The earliest reference I found about his work as a professional artist dates to 1882, when he submitted a painting to an exhibition in the Künstlerhaus in Vienna. Edmund Kregczy was married and had at least one child, his daughter Maria (1900-1987).

On a personal note, I would like to thank the team of the archive of the City of Ostrava for their support and a descendent of the Zwierzina/Kregczy family for interesting discussions and information.

Many thanks for this very helpful discussion and excellent sleuthing. I recommend that we present the findings to the Science museum as summarised by Andrea Kollmann. We can therefore confirm that the painting is of the Josef-mine owned by the Zwierzina family in Mährisch-Ostrau, (now Ostrava, Czech Republic). It was painted in or around 1895 by Edmund Kregczy, whose mother, Rosa Zwierzina, was one of the owners of the mining company.

Thank you for all this hard work. These additions have been made to the Science Museum Collections online and to ArtUK and this whole discussion added to our files.

Description
A factory complex with works, coal, wagonways and locomotive, workers' housing. There are predominantly women working with coal and wagons; smoking tall chimneys as a central feature. This has been identified as the Josef-mine owned by the Zwierzina family in Mährisch-Ostrau (Ostrava, Czech Republic). Kregczy's mother, Rosa Zwierzina, was one of the owners of the company, which employed 28 women. A wagonway runs from the Josef-mine to the Kaiser Ferdinand Nordbahn.