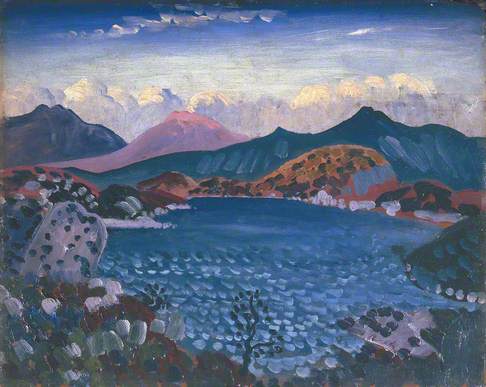 I believe this work is wrongly titled. The lake depicted is not Bala Lake (Llyn Tegid) but most probably Llyn Y Garn (OS Grid reference SH755378) which Innes painted several times during his stay at nearby Nant Ddu. Two paintings of this scene included in John Hoole and Margaret Simons' - 'James Dickson Innes (1887-1914)' ISBN 978-1-84822-139-0. The topography and view point of the images of Llyn y Garn painted in 1912 and 1913 and included as illustrations No. 165 and No. 166 in their book are cited in support of my case.

The Collection have commented: ‘It seems that the work was acquired as 'Welsh Mountain Landscape' in 1934, and remained under that title until around 1977, when it is referred to as 'Welsh Mountain Landscape, also called Bala Lake'. By 1982 it has become 'Bala Lake, formerly Welsh Mountain Landscape', and by 1986, just 'Bala Lake'. The origin of this change of title seems to be the book James Dickson Innes by John Fothergill and Lilian Browse (Faber and Faber, 1946). The work reproduced in black and white as no. 20 ('in the possession of JR McGregor Esq, Australia') is entitled 'Bala Lake' and the profile of the peaks match those of the work at Manchester pretty exactly. Whilst we accept the work has had its title changed from ‘Welsh Mountain Landscape’ to ‘Bala Lake’, we're not convinced by the evidence that the painting depicts Llyn y Garn, there's a lack of reasoning for how that conclusion is reached within the text. We have also not seen enough to suggest the topography in the painting matches that of Llyn y Garn, there have been many online image searches to view the area from different perspectives. We are re not always informed of title changes made through the publication of researAtch despite being the holders of the artwork in question. I think it would still be a good idea to raise this as a public discussion.'

Art UK have commented: 'Grant Waters has kindly provided attachments relating to the painting at Manchester Art Gallery in his 2013 copy of the book 'James Dickson Innes 1887-1914' by John Hoole and Margaret Simons, published in 2013.'

Put ‘Llyn-y-garn” into search at geograph.org.uk and the first photograph shown is very much like the painting.

The topography around Llyn-y-garn is much lower and less varied than in the painting, and to be frank so is that around Llyn Tegid (Bala Lake).

I suggest that this view fits rather better to Llyn Idwal (SH645596) and in particular the view across the lake to the mountain named Y Garn (SH630595). The latter might account for the original Saesneg titling of the painting.

Using geograph I've tried to do some comparisons and whilst I do see some similarity. The peaks I've marked 1 and 2 seem more mountainous in the painting than those seen at Llyn y Garn. I can't find a good enough angle of Bala Lake to do the same.

And finding a suitable angle to look at Llyn Idwal toward Y Garn is also difficult.

Firstly, a google image search for Bala Lake & Innes immediately reveals another Innes painting of an almost identical view with the same title, sold at auction some time ago but no further info is given beyond the completion date (1911, fig 1).

Secondly, it is clear that the vertical profiles of the mountains in these paintings and many others by Innes (and A.John) are grossly exaggerated for dramatic effect (an artistic licence often used by many artists including JMWT himself). The profile of the triple peaks on the right is characteristic of several mountains in N Wales when not so exaggerated, especially Cadair Idris seen from the north and west, Snowdon seen from the south and east & Arenig Fawr. At first sight, the dark triple-peaked mountain on the left is reminiscent of Tryfan seen across Llyn Ogwen but the other peaks in the picture do not seem to fit that view. Considering the above, I would like to suggest the following possibilities.

Firstly that it is, as stated, a view across Bala Lake, being a very loose representation viewed from the high ground northeast of Bala southward toward Cader Idris (on the right) and Aran Fawddwy (on the left). The centre peak may have been added for compositional effect (fig 2 via Google maps 3D).

Secondly that it is a view across Llyn-y-Garn toward the triple peaks of Arenig Fawr on the right, although the peaks on the left would seem to be much exaggerated (fig 3 using google maps 3D)

Thirdly that the triple peaks represent Snowdon seen from a point in the vicinity of Llyn Eiddew Mawr (c 6km w of Trawsfynydd (Fig 4). Less likely, but the 2 peaks seen on the left (Mynydd Mawr & Moel Eilio ?) do fit the 2 in the painting. Also a photo from Llandecwyn chapel (fig 5) for comparison.

Many thanks for the google map attachments Mike. The similarities of the painting with the views across Llyn Y Garn as well as the position of the mountain peaks are too great to ignore. Nevertheless, as this is very new discussion, I would recommend that we do not close it as yet in case any contributor would like to add anything else in support of the above.

Description
Thickly painted view of Bala Lake in Wales, painted in deep shades of blue. Rocks are visible in the left foreground, and on the opposite side of the lake, vast mountain ranges line the horizon and sit beneath a bright cloudy sky.