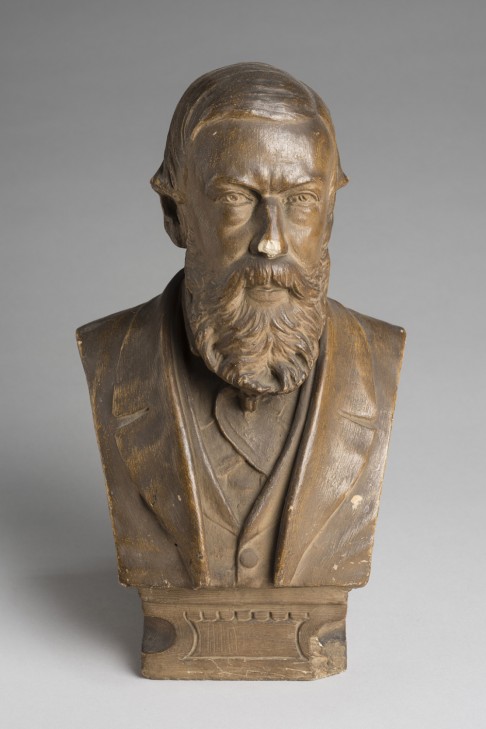 This is very similar to another bust of Sorby in the same collection by William Ellis https://bit.ly/3iOi5kS. It seems reasonable to attribute this version to the same sculptor.

The Collection has commented: 'Thank you for this - however when placed side by side the two works do seem to be stylistically different. We believe the bust above shows Sorby around 20 years older than the other one. Of course he may have sat for Ellis 20 years apart?'

Sorby and Ellis were both Sheffield men, so the connection makes sense. However, the white plaster bust in this collection attributed to Ellis (linked above) is not signed, as far as I can see. It was given to the collection in 1882, the year Ellis died, when Sorby was around 56. However, he could be taken for older than 56. Can the collection say what the Ellis attribution is based on?

The Sheffield Independent, of Saturday 9th December 1876, carried the following:

In the Sheffield Independent, of Saturday 17th March 1877, a follow-up appeared:

"I understand Mr. Ellis has just completed a casting for a bust of Mr. Henry Clifton Sorby. The bust will be in marble and the cost will be defrayed by subscription, in recognition of the valuable services Mr. Sorby has rendered to science. When completed, the bust will be placed in Weston Park Museum. If Mr. Ellis is as successful in the marble as he has been in the casting - and on that point there need be no doubt - a most faithful likeness of our distinguished townsman will be produced."

In the Sheffield Daily Telegraph, of Friday 8th February 1878, it was reported that, at the annual conversazione of the Sheffield Literary and Philosophical Society, "a model of the bust of Mr. H. C. Sorby, executed by Mr. Wm. Ellis, was also shown."

The Sheffield Independent, of Monday 23rd December 1878, carried the following:

"Mr. H. C. Sorby's Bust - It has already been stated that some of the friends and admirers of Mr. H. C. Sorby had decided to present him with his bust, to be placed either in the Free (?) University or the Museum. The model was shown to the members of the committee on Saturday, and Mr. W. Ellis, who has received the commission to execute it, was instructed to proceed with it at once."

At the Sheffield School of Art conversazione, as reported in the Sheffield Daily Telegraph, of Wednesday 23rd April 1879, "Mr. William Ellis' work is seen in marble busts of the Rev. S. Earnshaw and Mr. H. C. Sorby, the latter showing the marks of the pointing, and having by its side the tools used by the sculptor. The pedestal on which it is mounted is not only novel, but artistic and sensible."

In an letter from E. Ellis, of Pitsmoor, Sheffield, dated 6th March 1909, reference is made to a marble bust of "Dr. H. C. Sorby", "relegated to the dark corridor of the University."

Kieran, there is a marble bust of Sorby, currently listed under "unknown artist," at the University of Sheffield, which could be the marble bust by Ellis mentioned in the references you found:

It is similar but not the same as the white plaster bust attributed to Ellis held by Graves Gallery/Museums Sheffield.

Also, Kieran, I submitted a still pending proposal to AD over a year ago suggesting that the marble bust at the University of Sheffield must be by Ellis, given its similarity to the white plaster bust at Graves Gallery, but I was not aware of the information you have found.

It would appear that Ellis made some changes to the original version of the Sorby bust when he produced the final marble version. I expect he had kept the plaster in his possession, and that it was given to the museum upon his death in 1882.

As to the painted plaster bust, bequeathed to the museum in 1946, it would be of interest to know the identity of the donor.

The collection, of course, should know the identity of the donor of the white plaster bust it received in 1882.

The relevant staff member at the University of Sheffield has been alerted as to the new evidence found by Kieran concerning the marble version of the bust. We are awaiting her response.

However, that still leaves the painted plaster bust under discussion here. It seems most likely to be another variant with a longer beard by Ellis, possibly somewhat later than the marble bust. I suppose it is also possible that it was based on or derived from the known Ellis bust even if made by someone else. Thus, pending new evidence, it appears reasonable to list it as by or after Ellis.

I would be very surprised if the Sheffield Museum marble was not by Ellis, especially given the newspaper reports above.

I think there is virtually no doubt that the marble at the University of Sheffield is by Ellis, and it is clearly related to the white plaster version at Graves galley/Museums Sheffield. The newspaper description of the pedestal as "not only novel, but artistic and sensible" also fits nicely.

I meant Graves Gallery, of course. I hate typos.

Ellis, by the way, although a "provincial" sculptor, was a pupil of the better known Alfred Stevens.

Also, in the newspaper report of 23/12/1878, Free (?) University may refer to Firth College, established in 1879, which later merged into what became the University of Sheffield.

Sorby became president of Firth College in 1882 and worked hard for the establishment of the University of Sheffield, founded in 1905.

Given that William Ellis started work on the idea for the Sorby bust in December 1876 and the go-ahead to complete the marble version was not agreed until December 1878, this two-year time period might explain the variations in detail from the plaster models to the actual finished piece.

There is another bust of Sorby somewhere, modelled from life by Theophilus Smith.

Theophilus Smith was also a Sheffield man and was active 1861-1881.

Jacinto, re: 'As to the painted plaster bust, bequeathed to the museum in 1946, it would be of interest to know the identity of the donor.' I have asked the Collection, David

Jacinto, I have returned to the Collection and asked our temporary Art Detective contact by email the question I asked for you back in June. David

The wife of one of Sorby’s executors passed away in 1946. While the will of Emily Sorby (née Stendall) (1876–1946) does not mention busts, it does mention paintings, including two depicting her late husband Albert Sorby Buxton (1867-1932). I have attached an extract of her will and two articles about her husband.

The probate record for Henry Clifton Sorby, who passed away on March 9, 1908, shows that his executors were the reverend John Archibald Sorby, clerk, Albert Sorby Buxton esquire, and the reverend Albert Ernest Sorby, clerk.

Some dates were provided by the 'Mackeig-Jones Family Tree' on Ancestry.

Description
Henry Sorby was a microscopist and geologist.