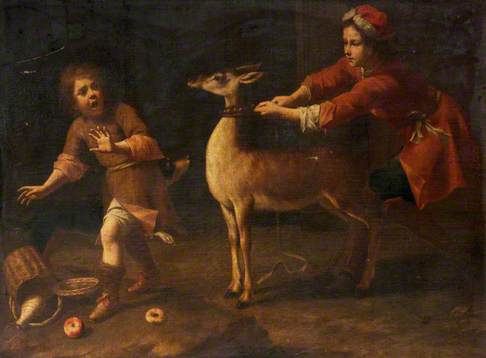 Although mostly known for still life paintings, Tommaso Salini (1575–1625) did produce several genre scenes: that linked below has elements similar to the Warrington picture.
https://bit.ly/2KGypQI

The subject here is also intriguing and maybe someone would be able to pin it down.

The collection notes: ‘We have no information about this painting, which may even have been acquired to demonstrate conservation techniques. Previous commentators have suggested a nineteenth-century date so if this work is by Tommaso Salini or his circle that would push the date back considerably.

We agree that the frightened child figure does resemble the figure in “The Monkey and the Cat”.’

This discussion is now closed. This picture has been attributed to Tommaso Salini (1575–1625).

The link to Tommaso Salini, or at least to paintings associated with him, is clear - well done Al Brown. A quick delve online reveals that Salini is a somewhat mysterious figure. Paintings of several genres are associated with this contemporary of Caravaggio: still lives, genre subjects and religious paintings.There is much debate as to which are by Salini himself. A related artist, the so-called 'Pseudo-Salini', has been created to cover some paintings, such as that referred to by Al Brown, see http://www.artnet.com/artists/pseudo-salini/ .

The genre paintings by Salini and/or Pseudo-Salini are, to me at least, characterised by the active role that animals play in the scene: they are participants, actors, in the events portrayed. Warrington's painting is certainly one of this type. The deer may have frightened the boy and caused him to drop his basket, and is being restrained by the girl. I don't think this is an Aesop story; it may not have a specific literary source.

For those with good Italian, there is a lengthy entry on Salini in Dizionario Biografico degli Italiani - Volume 89 (2017)
http://www.treccani.it/enciclopedia/salini-tommaso-detto-mao_{LPARENTHESES} Dizionario-Biografico)/

Victoria Markova seems to be the art historian most qualified to help us if she can be tracked down.

The Dizionario Biografico degli Italiani goes so far as to say “An objective examination of the painter's corpus must … forget the incredible number of paintings that have been attributed [to him] during more than half a century of critical studies, completely altering the appearance and giving rise to a catalogue that has lost sight of the few true works by Tommaso reaching us. In fact, all the paintings attributed to Salini depicting shepherds with animals, peasants, children's games, [and] many others on the antique market and in auction catalogs […], will be assigned to a series of anonymous masters …”

The frightened child does not just resemble but is practically the mirror image of the one in "The Monkey and the Cat." Furthermore, the apple at lower left is very similar to the apples in the basket of this signed and dated Salini still life:

The Warrington picture does not feel 19th century to me, not even as a copy (unless it is a remarkably good copy), and it could be early 17th century. Given that there is only one Salini on ArtUK (at the Foundling Museum in London), I think this picture should be listed as "attributed to" or "circle of" or at least "style of" Tommaso Salini (and ideally it should undergo proper restoration, since it might be one of the more important pictures in the Warrington collection).

Whether the attribution should be to Tommaso Salini or the so-called Pseudo Salini is beyond my capacity, but this picture should be associated with the Salini name for the sake of further scholarship.

The Treccani entry for Salini suggests he was primarily a still life painter but also painted some religious figure subjects, and notes he was influenced by Caravaggio.

Here's another link to the Salini still life I mentioned above:

Two Salini or Pseudo Salini pictures with a similar "feel" to ours:

There are more than a few similarities between this discussion's painting and the work sold by Christies and attributed to Salini, as linked to above and re-presented here:

Apart from the obvious expression of the frightened boy, there is the treatment of his clothes, with the sash-tied coat, the exposed knee, the falling stocking and the bow-tied laces on the thick-soled and square-toed shoes. There is also the presence, on the girl holding the doe in this painting and and on the floor at the young boy's feet in the other, of the red cap with its white fur trim. But do these elements point to a work by the same artist? Or could they be stylistic elements that were familiar to two or more artists working at roughly the same time.

Additionally, the scene of this discussions painting would seem to be an outdoors one, as the children and the doe appear to be standing on some sort of platform, given that the rear of the dog's body is set below the level of this platform's plane.

These might not be significant observations but they also might prompt additional consideration as to the source of the work in question.

As no doubt others have discovered, Victoria Markova works at the Pushkin - or did until recently.

It's perhaps worth pointing out that Warrington has some interesting Old Masters - including a recently identified Gregorio Lazzarini, also a untraced find

There is a consensus that we can attribute this high quality picture to Tommaso Salini, as first suggested by Al Brown.

Title
Children and a Roe Deer

Description
One child is restraining the deer with a halter while the other child looks startled. A basket with fruit is scattered on the ground.