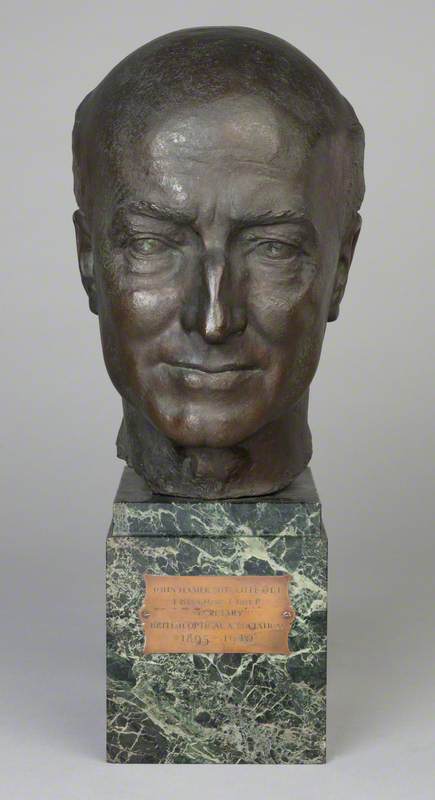 In 1949 Ernest Roland Bevan sculpted a bronze bust of Sir Alexander Fleming, which is now in the collection of the Royal Society. It is signed ‘E. R. Bevan 49’. The lettering, especially the letter ‘E’, differs from the signature on the back of this sculpture, although the numbers are a good stylistic match.

This discussion is now closed. The sculptor was confirmed as Ernest Roland Bevan (1891–1979) and information about the sitter has been added to the record.

The Ophthalmic Optician, Volume 5, Issues 1-13 (1965) carries an article on Robert Sutcliffe and his son John Hamer Sutcliffe. Although not wholly accessible online, the snippet that I can see is as follows:

"Of John Hamer Sutcliffe, his son, I could write at length, for him I knew well and to him owed much. ... His bust, portrayed by the sculptor, Mr. E. R. Bevan, r.b.s., is to be seen in the Museum which he did so much to create and which was his ..."

A proper search of the relevant issue will confirm if the two parts of the sentence are connected to each other.

However, the College of Optometrists entry for Sutcliffe suggested that they are:

"John Hamer Sutcliffe (1867-1941) an ophthalmic optician originally from Rochdale, but who moved to set up an optical practice in Blackpool, was the distinguished founder of the British Optical Association Museum in 1901."

The surname rang a bell, and here it is: or rather a low-relief cast portrait bow plaque by Bevan for the SS 'NIcholas Bowater' dated 1957, as a further addition to his list of work. It is in fact on show as part of the current NMM figurehead display, not in store as in this old record image.

I stand corrected on my statement that Bevan was born in London. I now realise that the event took place in Wavetree, Liverpool.

Edward, in regard to the bust of Sir Alexander Fleming, you might be interested in the attached article, from The Sphere, of the 1st May 1948. The mention of the memorial to the painter Philip Wilson Steer might also be worth noting.

The date on the Fleming bust looks like 48 rather than 49 to me, but it could certainly be by the same sculptor, who need not have signed the same way every time. The first initial of the signature on the Sutcliffe bust does appear to be an E, not an F.

Good find, Kieran. I've managed to stitch together snippet images of almost the whole page from The Ophthalmic Optician, and reconstructed the missing (bottom) section by playing with different bits of search text. Attached. As you can see there's a lot more than one sentence, but it confirms that the bust by 'Mr E. R. Bevan' in the British Optical Association Museum is/was indeed of John Hamer Sutcliffe.

Though the style of signature on Alexander Fleming's bust (https://bit.ly/2lDyOM9) is certainly different, the style of the portrait itself is very similar to Sutcliffe's. Incidentally, I think the date on the Fleming bust probably reads '48' not '49', though others may disagree - see attached double image (original plus tweaked version).

Probably just a coincidence, but from c.1939-46 Bevan's next-door neighbour at Rusholme Road - in fact in the other half of his semi-detached house - was a 'sight-testing optician' called Frederick Rickett. However Rickett seems to have been just a local high street optician, so any connection to senior figures in the science of optometry like Sutcliffe is somewhat unlikely.

Another Fleming bust by Bevan:

More busts by or attributed to E. R. Bevan:

Bevan was also responsible for the bust in the Fleming Memorial Garden at Hastings Square, Darvel.

He was also the "architect and sculptor" of the WW2 war memorial behind the dais at the Oxford Union:

Apparently, the Fleming bust was his best-known work, which is why there are at least three versions of it.

I attach a phone snap of Bevan's 1957 bronze bow plaque for the SS 'Nicholas Bowater' (completed 1958), probably removed when the ship was sold by the Bowater company in 1973.

The updated entry on it is now here:

There is a better photo of it, both than mine and the one currently shown with this entry, which I have asked to be substituted. I am not quite sure why the 'record' snap is there, or was taken, since the better one appears to predate it.

Minor typos still to correct I see (e.g. Nicolas/Nicholas)...sorry: and just to add that while there are online photos of the other Bowater ships, I have seen no evidence they also had similar portrait plaques of the other family members they were named after.

It's a first-rate entry Pieter, but I believe it was Central School of Arts (plural) and Crafts, though you may have already caught that.

Thanks Kieran, bugs now ironed out:

Having thought NMM might have obtained this long ago from some direct shipping connection, I was surprised to see it came via a Phillips auction as late as 2000. Also surprising was the price of £115, which is probably little more than scrap-value for the metal - though size and its hefty weight count against it as a 'domestic' piece, even considered as a family portrait!

Regrettably, I don't think that the 'Mapping Sculpture' site is still being actively updated -though happy to be contradicted - so perhaps a tally of Bevan's work will be something for Art UK to list in due course when it becomes clear how much may be in public hands as result of its current sculpture project.

Can we now close this discussion?

This was a bit of a non-starter, but for a misreading of an initial it was ‘all writ out for you’ in Scottie Wilson’s neat aphorism. It did, however, produce some interesting sidelines, not least an instance of the use of portraiture in the naming of Bowater’s ships, thank you Pieter van der Merwe. We note that the sitter here, John Sutcliffe, was the founder of the Museum and Library at the College of Optometrists. For all the failed attempts by nominators in elections for Associate of the Royal Academy (ARA), the sculptor was clearly successful in the genre of portraiture, and a number of works can now be added to his oeuvre. Having lain dormant for so long, the discussion can now be formally closed.

Description
The sitter was an ophthalmic optician from Rochdale who set up an optical practice in Blackpool. He was the founder of the Museum and Library at the College of Optometrists.