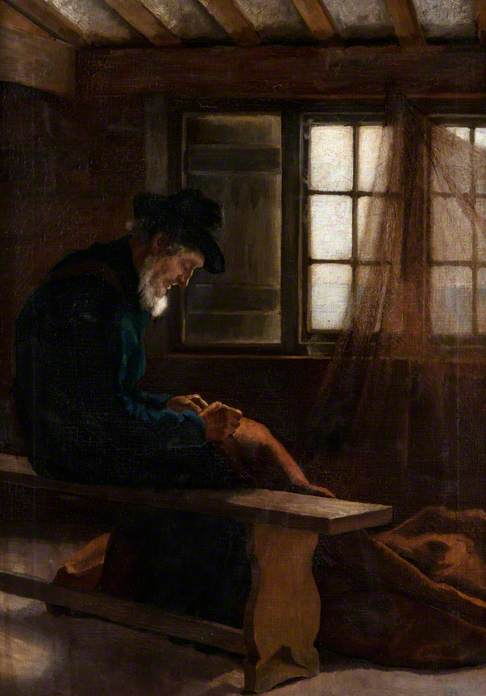 ‘“Mending the Sails” … is in the Inverness Museum and Art Gallery collection cared for and administered by High Life Highland on behalf of Highland Council. The painting came to the museum in lieu of Capital Transfer Tax from a Miss Alice Mary McClure, who lived in Inverness. Regrettably, though, there appears to be almost no paperwork on the painting itself. There are two very badly faded, hand-written labels on the back. These suggest that the painting was purchased at one time for the sum of £21. There are also two references to the title of the painting "Mending the Sails" and the name "Ross" – which may or may not indicate the name of the artist. There is no visible signature on the front. The other paintings that came as part of the bequest appear to be mostly from the hands of artists from the Dutch/Northern European schools, with a tendency towards genre scenes – though it could be that some of the works are by Scottish artists consciously working in a Northern European manner and looking to Dutch originals. There was undoubtedly a strong market for paintings in this manner in Scotland in the second half of the 19th century/first half of the 20th century.’

There are two works by James Wilson Mackenzie on Art UK, both of which were gifts from the artist’s mother: ‘On Duty, portrait of “Old Bibby”’, 1890, Atkinson Art Gallery Collection, Southport, and ‘Sunny Day at Bebington Windmill, Wirral’, Williamson Art Gallery and Museum, Oxton, Wirral.
https://bit.ly/2N3eu2G
https://bit.ly/2Q4s3NU

Study of a fisherman attributed to James Wilson Mackenzie.
https://bit.ly/2oIbStr

Can more be found out about ‘Ross’ (mentioned on two labels) in the process?

James Wilson Mackenzie appears to have lived into the 20th century. His works have been offered at auction in 1994 and 2018 in the UK. One was titled 'Resting in the Shade' dated 1888.

There is also a James Wilson McKenzie (no "a" in the surname) who may or may not be the same painter.

Artnet only lists a James Wilson Mackenzie (not McKenzie):

Could "Ross" refer to the Ross-shire area in northern Scotland? Could that be where the depicted scene takes place?

The earlier exhibition catalogues list this artist as "J. Wilson MacKenzie", perhaps suggesting the use of a double surname - together with the possible variable spelling of Mac/McKenzie, there is some potential for confusion!

Attached are two poignant newspaper articles regarding the artist James Wilson Mackenzie (1865 - 1893). His father, James B. Mackenzie, was the chief reporter for the Liverpool Mercury in 1881. Census records for 1871 and 1881 describe him as being completely deaf and dumb, and a search for "J. Wilson Mackenzie" and "Wilson Mackenzie" on the BNA shows many references to him from 1881 until his death. He was the eldest of several children and a younger brother, George, also an artist, was (in the 1881 census) described as semi-deaf and dumb.

James contributed regularly at the Liverpool art exhibitions and, from an address at 28, Falkner Street, Liverpool, also had one work accepted at the RA in each of the years 1888, 1889 and 1890. He also is reported to have won several bronze and silver medals for his paintings and drawings at various exhibitions.

In 1890, he led a delegation of fellow deaf and dumb Liverpudlians to Paris. He was described thus: "...to which a party of a dozen youths went from Liverpool, headed by J. Wilson Mackenzie, also deaf and dumb, whose high reputation as an artist in this city shows what eminence can be attained even under such a serious drawback."

The various newspaper reports mention that the subjects of his work include fishermen, smithys, old villagers, etc., themes in keeping with this discussion's subject.

Mackenzie seems to have spent much time on the Isle of Man and the Ross referred to might have something to do with Ross Bay, 27 miles north of there, in Scotland. The connection to Scotland might come from the fact that his father was Scottish. The notion of him sailing from Liverpool to the Isle of Man and onward to Scotland is not unreasonable, especially as many of his reported subjects relate to the fishing industry and to picturesque bays.

Due to failing health, he spent some time in Switzerland, as is mentioned in the newspaper cuttings. He died before he reached the age of 30.

Alyth is in the region of Lintrathen, which is located north of Dundee.

The attribution to Mackenzie is perfectly plausible, but what was the basis of the original connection made between him and this picture? Was it simply that someone who knew the painting was reminded of it by running across a fitting title in an old exhibition catalogue?

As I expect other collections have found, Martin Hopkinson (who started this) does see old catalogues and usefully -and directly if he has a personal contact - suggests potential tie-ups between titles in them and known pictures. This looks like another such, but seeking wider opinion, and looks a good basis for an attribution. The odd man out in the original list of Mackenzie pictures he provided is the‘Sunny Day at Bebington Windmill, Wirral’, at the Williamson Art Gallery: its so different to Mackenzie's apparently usual subject and manner as to suggest a recording error somewhere.

'Sunny Day at Bebington Windmill, Wirral' could be signed lower left (cut off in the PCF photograph?). I will ask the collection if they could kindly take a look.

I also noted the apparent discrepancy between the figure subjects and the Wirral landscape, but since both Mackenzies listed on ArtUK were reportedly donated by the artist's mother, I opted not to question their authorship. However, if the landscape is signed, that should certainly be pursued for confirmation.

This landscape is more in keeping with Mackenzie's figure subjects:

The Wirral landscape looks more French, but if (as Kieran found) Mackenzie visited Paris in 1890, it may reflect the effect of what he saw there.

The painting is in another building so there will be a delay before I can get to it and check the signature, I'm afraid.

Williamson Art Gallery & Museum, thank you very much for offering to check the signature. We look forward to hearing from you in due course.

Returning to the original topic, Kieran's suggestion of Ross in Dumfries and Galloway as the locality for the painting is plausible. The net hanging in the window may be a shrimp net, and shrimp trawling was very active in the Solway Firth at that time. Also, there was a thriving art scene centred in Kikcudbright, which might have attracted MacKenzie to the area.

Of the labels mentioned above, are there photos available to see?

This discussion has been removed from the group 'Portraits: British 19th C' and linked instead to 'British 19th C, except Portraits'.

Is it at all possible to have a better quality image of the face of the gentleman please?


J. Wilson Mackenzie also has an unusual sculptural addition to his portfolio of work, which in use to this day.

As a result of a commission from Elkington and Co. in 1882/83
J. Wilson Mackenzie designed a medal for the ‘Liverpool Shipwreck and Humane Society’. Their intention was to introduce an alternative to the Marine medal. A medal that was more appropriate for the reward of bravery in cases of rescue of life from fire and other dangers. The design was based on a well known painting by J.E. Millais. The painting had been exhibited at both the Royal Academy and Liberpool Academy in 1855, and was in the possession of a Liverpool based gentleman called Holbrook Gaskell Esq.

“...medal for the reward of bravery in rescuing human life from fire and other dangers not specially mentioned in the constitution of the society.”

“An admirable design for the fire medal has been made from a painting by Mr J. E. Millais, R.A. entitled “The Rescue from Fire,” which represents a fireman descending the staircase of a house on fire, in the act of rescuing three young children, one of whom he is about to hand to it’s mother. The picture is the property of Holbrook Gaskell, Esq., of Woolton Wood, who very kindly permitted a drawing to be taken by Mr J. Wilson Mackenzie, a Liverpool artist, on the understanding that it was to be used only for the design of the society’s “Fire Medal.”

From a newspaper article discussing the 44th annual report of the Liverpool Shipwreck and Humane Society committee having just been being published.
Liverpool Daily Post, Tues. 28th Aug 1883.


The trial impression of the die for the medal was received in October of 1883.

“The subject of the medal has been cleverly reproduced and adapted by Mr J. Wilson Mackenzie, a rising young local painter, from the well known picture by J. E. Millais R.A.”

“Hence Messrs Elkington, to whom the production of the medal has been entrusted have commissioned Mr Mackenzie to reproduce Millais’s picture for the fire medal,...”
- Liverpool Mercury, Thurs. 18th Oct 1883.

The Rescue - J. E. Millais, National Gallery of Victoria, Melbourne.
Information and Provenance
According to the provenance of the painting on the website of the NGV, the painting was in the possession of Holbrook Gaskell Esq. of Liverpool from c.1879 to 1909

Thank you E. Jones for that addition. I had 'potted' Mackenzie in 2018, now updated below - though the attribution of 'Mending the Sails' to him has yet to be agreed.

Yes, I realise that. Thought it would useful for his bio anyhow. I had this information from the research into another painting I had been looking at.

E. Jones, please find attached a closeup image of the man's face, but we don't have a high-resolution image.

An older discussion. Yes, I have been searching news articles today.

Please see the attached article from ‘The Scotsman’ of November 21, 1918, that mentions a painting called ‘Mending the Sails’ by J. Campbell Noble, R.S.A.

I have attached a composite of the Art UK work and a painting on the Invaluable website called ‘(Resting - An interior scene)’ by “James Campbell Noble (Scottish, 1846–1913)”. https://tinyurl.com/4s7dpjn8.

Acquisition method
acquired as part of the McClure-Simpson Bequest, 1990