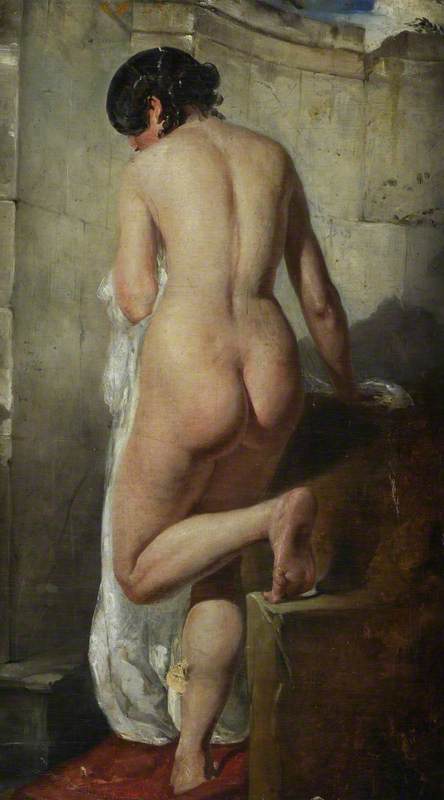 This nude study seems to be very much in the manner of William Etty. Has he been considered? Sarah Burnage, curator of the 2012 Etty exhibition, might have an opinion.

The collection comments: 'Although not attributed to Etty in our records, I have always considered that this was likely to be by William Etty but have no solid evidence.'

This discussion is now closed. The artist record has been updated from ‘unknown’ to ‘style of William Etty (1787–1849)'.

At this early stage may I suggest we also consider William Edward Frost (1810-77) who produced work similar to that normally associated with Etty.

Too precise and realistic for Etty. I would suggest a French academician.

This is clearly a life-room study to which an imaginary background has been added to create a more complete, saleable picture. Etty certainly enhanced some of his painted life-room studies in this way, but his own invented backgrounds are usually much more broadly painted and do not close off the distance so abruptly as the niche-like curving stonework does here.

There were some 800 of Etty’s painted life-room studies in his posthumous studio sale of 1850. Most were executed on millboard, his favoured support for such works but some were on canvas. Many were bought by dealers who then commissioned artists to make these generally unfinished works more complete and saleable by adding backgrounds, as well as draperies and other details. I suggest that the present work (on canvas) could have been amongst such pictures. Mentally blocking out the background makes it easier to accept that the actual figure of the nude woman might be by Etty.

Richard Green's comments are indeed most helpful and introduce clarity to this debate. At this point in time I too would tend to believe the work to be by Etty, however I have a problem with the model's foot. I say this as it is surprisingly most detailed suggesting a toe curled under the sole, possibly the result of fashionable shoes! Normally I have felt that the feet are usually rather weakly executed in Etty's single female works.

Turning to William Frost, an admirer of Etty, I am also concerned that there appear to be so few oils attributed to him in known collections. This seems surprising to me as when one, for comparison purposes, considers those exhibited at the RA between 1811 and 1850, Etty exhibited 138 against Frost 1836 to 1878 of 77 (Graves). As few of these works appear to be signed or monogrammed there is the question of correct attribution. Sadly, historic commercial interests may suggest Etty to be the most advantageous - who knows. Thus we are left with perhaps many assumed "Etty's" which are in fact "Frosts".

I also agree that there are paintings of similar subject matter, clearly by continental artists influenced by Etty that would have found a ready contemporary market.

In Etty's Candaules, King of Lydia, Shews his Wife by Stealth to Gyges, One of his Ministers, as She Goes to Bed (1830), we see similar details. The left foot looks (not right) awkward as well. I don't know if this is Etty or not but there are some similarities worth noting.

This somewhat contrived pose, or some variant of it, was certainly used by Etty a number of times:

There appears to be a problem in the way the middle of her spine is shown unless the painting is damaged. This figure lacks the charm and appears less supple than other nudes by Etty.

Barring more expert opinion, I think this could be either attributed to Etty or at least listed as style of Etty.

The pose –- or more precisely the viewpoint adopted -- is certainly characteristic of Etty. Also typical of him is the way he allows the extremity of a limb, in this case the model’s right foot, to touch or even be cut by the edge of the support. However, I agree that the treatment of the figure lacks something -- the 'lustre, beauty and fleshliness' which, in his own words, Etty sought to convey in his nudes. Moreover the treatment of the spine is indeed odd. All this might be a matter of condition, but it could equally be the result of intervention by other hands if the work were among those in Etty’s posthumous sale, as suggested above. While, I think it would be difficult to be more certain about the authorship without access to the actual painting (and possibly not even then), I suggest it would not be wrong to catalogue the work as ‘Attributed to William Etty’. At least that way it would not be entirely lost to a search on Art UK.

Precisely, Richard. The work should come up in a search for Etty. A great deal could and ideally should be done to improve the Art UK database in general, even by way of simply coming up with better titles for unattributed pictures, to make searches more effective and productive.

Marion, would you please ask the Dick Institute for any additional accession information they might have for this work, as there presumably must be some paperwork attached to the FA/A257 accession number. Do they know who donated the work, or how and when it was acquired?

I have tried to track down the Etty specialists but without success. The best we can say at the moment is 'Manner of William Etty'. I would be unwilling to go as far as 'Attributed to Etty' without further support from a specialist. But Richard might have a stronger a view.

Thank you, Richard. We recommend that the painting is described as in the 'Manner of William Etty'.