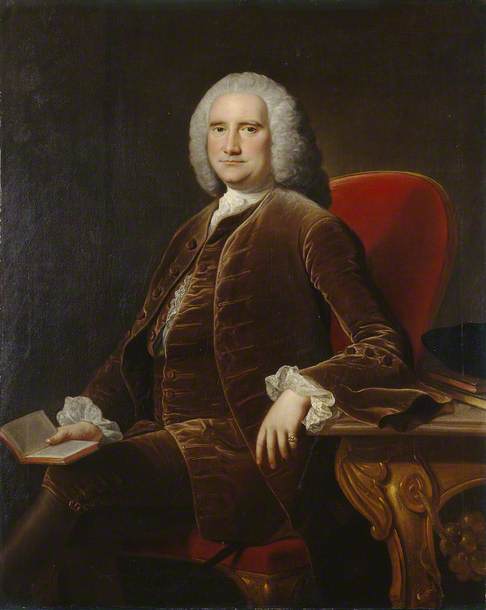 The portrait was accessioned as a portrait of Archdeacon Sharp and it was assumed initially that this was Thomas Sharp (1693–1758), DD. Thomas Sharp would have been 65 in 1757 and the sitter seems younger.

The identification of the sitter was changed to Thomas’s son, John Sharp (1723–1792), DD but it is not clear from gallery files when or why. John Sharp would have been in his 30s and would seem a better fit for the age of the man in the portrait. The biographical information we have about John Sharp is as follows:

'BA Trinity College, Cambridge in 174, MA in 1747 and STP in 1759. In 1752 he married Mary (1720–1798), daughter of Dr Heneage Dering, Dean of Ripon, and had one daughter. Sharp became Prebendary of Durham, Archdeacon of Northumberland 1762, Vicar of Harbourne and Senior Trustee of the Estates of the late Nathaniel Lord Crome, Bishop of Durham. He was appointed Curate of the Perpetual Curacy of Bamburgh on the death of his brother, Thomas in 1772.'

Any records that confirm that Hudson painted Thomas or John Sharp have yet to come to light. A researcher who contacted us more recently who is looking into the Sharp family has so far not come across anything in family papers. The identification of the sitter therefore remains unconfirmed. The portrait was presented to the gallery by Thomas Thornhill Shann Esq. in 1901. It is dated 'T. Hudson / Pinxit 1757' on the lower left hand side.

Is there an engraved portrait frontispiece to the 6 volumes 'The works of Thomas Sharp DD', published in 1763?

Yes, there is a frontispiece: http://bit.ly/2ffaXOM

They both look quite different than the sitter in Hudson’s portrait.

Thank you, Martin Hopkinson, for these suggestions. As a scholar working on archdeacon John Sharp, I have long queried the identification of the sitter. The last time I contacted the Manchester gallery on the subject was about a year ago, but either my enquiry or the answer must have got lost in cyberspace.
The Manchester sitter does not wear clerical dress, unlike two known portraits of archdeacon John Sharp at Bamburgh Castle and in the famous Zoffany portrait. In 1757, John Sharp was not yet an archdeacon or a trustee of Lord Crewe's charity, but he had long been the vicar of Hartburn, Northumberland.
Besides, the Manchester portrait wears a signet ring, unlike John Sharp in the Zoffany portrait. Many years ago, before the age of digital cameras, I tried to photograph it, in order to check whether there was a visible coat of arms on the ring. I wonder whether modern photography would help.
I cannot remember that there is any clue in the book that appears in the Manchester portrait.
Furthermore, the sitter in the Manchester portrait does not seem to look like the archdeacon in two above-mentioned portraits. The bone structure does not seem to be the same.

I've taken an closeup of the ring but not sure it helps.

Are there clues (labels etc) on the back of the painting?

This work is currently on display so the back is not accessible. Sorry.

There is another portrait painting of Edward Dyke (1688-1746) believes by Thomas Hudson it looks like it's for the same sitter, collection of Dunster Castle, Somerset (Accredited Museum)

I have asked the Collection if the portrait is still on display, making the back inaccessible.

Can any one trace the 18th century maternal ancestors of Sir Thomas Thornhill Shann [in the maternal line] or those of his wife?

Is it known else what Sir Thomas owned? Were there any sales from hi dwcollection?

Sir Thomas also gave a pair of portraits from 1661 by Hendrick Cornelisz van Vliet to the Manchester gallery in 1909. That suggests he may have been a collector rather than someone with just family portraits (all three are well signed and dated).

The picture at Dunster that Jimmy Alaa refers to above (which is only attributed to Hudson) is here:

There's certainly a facial similarity (though you can se why it's only attributed) but of course the sitter died 11 years before this painting's date..

is the earlier provenance of the Van Vliet pair known?

I don't know about the van Vliet pair, but this obituary (https://bit.ly/3tmOKkr p 3 of pdf) suggests he came of fairly humble background. Not many family portraits in 19th century Ancoats.

but what about his wife's?

Shann was a commission agent for cloth. Did he have a partner from whom he inherited? He certainly amassed a fortune . Are Manchester/Stockport obituaries illuminating as to how he did this?

Shann became a councillor in 1897. Can street directories, censuses and in particular Manchester newspapers throw more light on him and his associates?

The obituary from the Bulletin of the Rylands Library (https://bit.ly/3tmOKkr p 3 of pdf), apart from reassuring us that "He started life at a very
early age" says that he started business on his own account at 22, so inheritance from business partners seems unlikely.

A posting on a family history site (https://bit.ly/3kYsw4s) gives tombstone details of a wife, Hannah (nee Sutcliffe) who died in 1899, but there are clearly current descendants, including posting on the topic and some confusingly with the same name.

This website gives more about him (https://bit.ly/2X8g5LJ) and emphasises his poor upbringing. It says "He married Hannah in 1869 in Harpurhey" which suggests it was when he was still starting out (they would both have been about 23), possibly she was from a similar background.

So very much the self-made man and either a collector or, given the low number of paintings, possibly just a local benefactor purchasing pieces that the gallery wanted on their behalf.

What I meant was acquisitions from contemporaries in business and from friends - as you say it is quite evident that it was not from family inheritance - but we know even less about his wife's family than about him. When he did become rich - which he quite clearly was.
He may well have owned more paintings than those in MCAG
Were there any sales from his own collection before or after his death? I have do not access to Lugt - which itself is far from complete over auctions in the North West

if we could establish how and where he acquired his art, it might help us going back to the name of the sitter of this Hudson who may be a totally different Sharp - a fairly common surname.

The younger man's will seems to be referred to in Gloucestershire Archives D3549/13/2/15
There also seems to be a Rev Sharpe [wih an e] in Cumberland in the 1770s, who may or may not be the Rev John Sharpe of Preston in Lancashire Archives 1760-73

The work has now come down off display and I've been able to take an image of the back. Unfortunately it has a modern backboard so nothing of note is visible.

My guess is that this is not a work that was passed down through generations of Thomas Thornhill Shann’s family.

An art exhibition at Shepherd's Galleries in London was discussed (see attachment) in the 'Morning Post' of Wednesday, March 27, 1901. Hudson's 'The Ven. Archdeacon Sharp, Prebendary of Durham' was on display.

An article in the 'Manchester Courier' of Friday, May 24, 1901, discussed the donation by Shann of the Hudson portrait 'the Ven. Archdeacon Sharp' (see attachment).

A Manchester City Art Gallery publication from 1910 provides some details about the work 'the Venerable Archdeacon Sharp, D.D.' (see no. 194, on pages 56 and 57, attached) as well as a photo of this work (on the page before page 47).

As shown in the attachment, in 1951 Manchester Art Gallery still recorded this work as Archdeacon Sharp.

A publication from 1899 indicated that portraits of Sharp family members were in the Court Room at Bamburgh Castle. Here is the reference book (see pages 33 and 34, attached):

I contacted Bamburgh Castle and the Collections and Conservation Manager was very interested in this discussion. She told me that she is "very sure the painting is not of Dr John Sharp ... we do not have the small sculpture of Dr Sharp unfortunately. There are some large sculptures in St Aidan’s Church, Bamburgh." She kindly sent me an image (attached) of Dr John Sharp. I searched online for the larger work that it would have been taken from, and found it here:

Perhaps someone might review the Exhibition Catalogue for Shepherd's Galleries from the 1901 sale at the National Art Library, London.

Here is a link to information about Shepherd's Galleries.
https://learn.bowdoin.edu/fletcher/london-gallery/data/pages/as628.html

Hopefully, the first attachment that failed will transmit.

Description
Portrait of a seated gentleman, seen in view to the left with his head turned towards the viewer. He has his left arm resting on the corner of a table and his hand with a ring on the little finger draped over the edge; the table, situated in the right bottom corner of the composition, has ornately carved legs and on it are placed books and a black hat; his legs are crossed and held open on his knee is an book. The sitter wears a grey wig and a suit in brown velvet comprising of a frock-coat with large, folded-back and buttoned cuffs with lace ruffles at the wrist, a waistcoat with white lace cravat at the neck, and breeches. Plain, dark background.