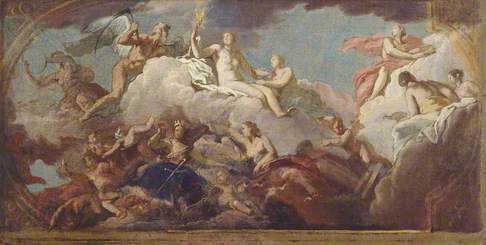 François Marandet believes that this oil sketch, along with two related works attributed to James Thornhill and in the collection of Manchester Art Gallery, are instead by Louis Chéron. The others are ‘Time, Prudence and Vigilance’ and ‘The Victory of Apollo’.
https://bit.ly/2xxP04C
https://bit.ly/2QRpW0n

This discovery results from Marandet’s research for the upcoming show on Louis Chéron that will take place in the Musée des Beaux-Arts de Caen. The main points are reiterated here with the author’s permission.

From the time of his arrival in London, in 1693, Louis Chéron occupied a prominent place in English artistic life: the great decorations of Boughton House and Chatsworth, as well as the albums of drawings in the British Museum, bear witness to the quality of his output (see Edward Croft-Murray, ‘Catalogue of British Drawings’, London, 1960, p. 272, nos 1–4). Curiously, these thirty years of artistic production is marked out only by a tiny number of surviving paintings, seven of which date from his long stay in England. Of these, ‘Vulcan catching Mars and Venus in his net’, c.1695, in the Tate collection, is perhaps his best-known work. https://bit.ly/2OJxroN

The Tate painting, a ‘première pensée’ (early idea) for the ceiling of a bedroom at Boughton House, clearly reveals Chéron’s handling at this early stage, permitting us to distinguish it from the oil sketches of the other great history painter on the English scene at that time: James Thornhill (1674–1735). Through a frank opposition of light and darkness and a pronounced sense of anatomy, the volume of forms appears more defined in Chéron than in Thornhill. Particularly revealing in this respect is the body of Venus who is like a wax figurine.

The markedly different style of Thornhill’s ‘modelli’ has prompted Marandet to question why the three oil sketches in the collection of Manchester Art Gallery are classified under his name. Thornhill’s smooth, highly pictorial handling is scarcely in evidence; instead, he argues, the relationship with Louis Chéron is plain to see.

The naked woman – incarnation of Truth – conforms to the figure of Venus as she appears in the Tate canvas, both figures having the appearance of being modelled in wax. This sense of form shows through in the rendering of ‘Prudence’, as it does in the allegorical figures aligned in the foreground of the third oil sketch.

The iconography of the sketches, which has never been clarified, appears to be the cardinal virtues. The series was probably completed by a representation of ‘Temperance’, the fourth cardinal virtue, which was likely presented in a partially rounded format, as a ‘pendant’ to ‘Justice’. The important part given to the sky and the illusionistic foreshortening of the figures suggest that the four compositions were preparatory studies for a ceiling decoration. In the absence of any indication that they were executed, the iconography recalls the painted decoration of Antonio Verrio (c.1639–1707) for the bedroom of Queen Anne at Windsor Castle, where the sovereign appears surrounded by the cardinal virtues. Are we dealing with a project perhaps submitted by Louis Chéron with a view to the same great decorative scheme?

To put a time-frame on this suggestion, the Stamford Mercury of Thursday 3rd June 1725 reports that on "Wednesday morning died suddenly, Mr. Louis Cheron, a famous painter in Covent Garden, who hath left his maid in money £400, and in goods to the value of about £300 more."

His 'Judgement of Paris' was sold at the auction of the estate of Mrs. B. Briggs of Cawkwell House, near Louth and Horncastle, in January 1858.

What would Marandet make of the Thornhill linked below?

Francois Marandet has replied: 'I would just say that all components of Thornhill's sketchy manner can be seen – as if it was signed: the summarized definition of the human body, the kind of poses (quite animated but never brutal), a coherent brushwork, last but not least, the subject-matter: there is almost always an apotheosis (or a triumph) with him. Much has been done on this very period of British art in recent years (articles, restorations, and a symposium). It looks like the gap between Lely and Hogarth is gradually being filled …'

These oil sketches are going to the forthcoming exhibition on Louis Chéron at the Musée des Beaux-Arts de Caen, where they can be evaluated effectively. Would anyone like to comment on the proposed reattribution in the meantime?

If one looks at all of Thornhill's original multi-figure works on Art UK, there seems to be a definite tendency for images designed in a vertical format, whereas all three oil sketches under discussion are horizontal. As best I can determine from Chéron works online, he was more prone to horizontal designs.

The Musée des Beaux-Arts de Caen exhibition scheduled for November has been postponed to November 2021.

This is an intriguing proposition and online skimming through prints after Cheron in the BM holding produces plenty of general figure composition parallels. A further one not so easily found -but also relevant - is the 'hieroglyphick figures' in the symbolic upper part of this marine print in the YCBA which is also by Cheron.

The main image represents the 1642 revolt of the fleet under Charles I but (as the original printed text explains) with the shipping updated to the early 18th-century. The figure symbolism is (to me) pretty obscure apart from the weeping queen at right, with a sleeping lion alongside, but it is certainly an unusual place to find Cheron: the main view is after Thomas Baston, possibly a dockyard draughtsman, only really known from a single set of early 1700s marine prints.

For nearly 20 years, from 1969 until removal in 1985/6, Cheron's fully finished, circular 'The Triumph of Peace' -originally in Halnacker House, near Chichester- filled the central roundel of the Queen's House at Greenwich as 'circle of Thornhill'. It was removed and deaccessioned (as 'wrong period') when the House was restored in 1986-90 to a more 17th-c presentational form and replicas of the original 1630s Gentileschi ceiling canvases were inserted (1990-99): they too then went in further changes.

I remember the huge wooden drum on which it was rolled for removal, I think by or for Agnew's, who attempted without success to find a private buyer before it was eventually auctioned at Sotheby's. It was either Agnew's or Sotheby's who identified it as Cheron and there is a good colour image of it, still in the QH ceiling, in John Bold's 'Greenwich; an architectural history of the Queen's House and Royal Naval College' (Yale UP, 2000), fig. 97 p. 70.

According to Francis Carnwath, who told me this (when he was first CEO of the Greenwich Foundation for the Old Royal Naval College from 1998) it had been removed from Halnacker during renovations there by his uncle, the architect Claud Phillimore (1911-94), who thereafter stored it for some years rolled up in his garage. The NMM bought for £200 in 1969 from 'The Grange' near Chichester, which was presumably a subsequent home (i.e. not Phillimore's and it was not bought from him): that was reportedly a fraction of the costs of installing it. If its current whereabouts are known perhaps someone could say: it may have gone to a private house in the USA, but that's just a half-memory of seeing something to that effect and possibly wrong.

Just a PS to above that the ex-QH (Hall ceiling) 'Triumph of Peace' was eventually sold as by Cheron at Sotheby's 'British Paintings' sale, 11 July 1990, (lot 103). Current whereabouts not noted.

Description
Naked female figure of Truth seated on a bright cloud holding aloft a shining jewel and attended by a second female figure, having just been revealed by the winged figure of Time leaning against the cloud to the left. Crowned figure of Justice in the bottom left below Truth and Time, surrounded by other figures and flying cherubs. More naked allegorical figures to the left and right of scene, seated on clouds.