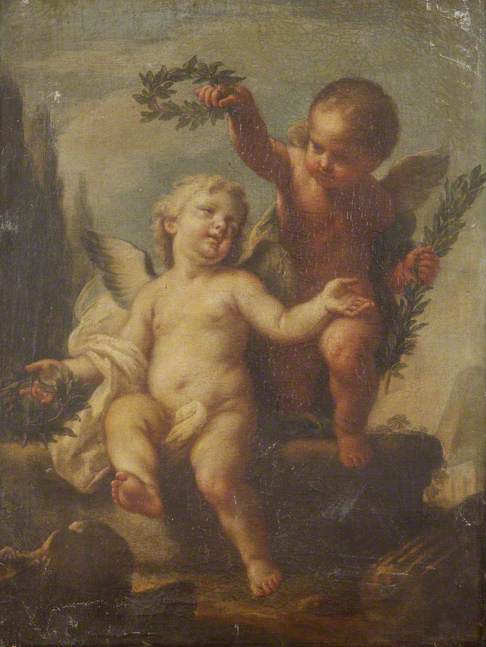 Although NICE Paintings attributes this and its pair https://bit.ly/3zdbwOk to Bernardo Amiconi https://bit.ly/2TgxFKZ, a little-known late 19th century painter of sentimental female figures, a more likely attribution would seem to be the well-known Jacopo Amigoni (often spelled Amiconi in the past) (1682–1752), an Italian painter of mythological and decorative subjects including many of cupids at play. See the painting attributed to him in Sheffield https://bit.ly/3v7pRIQ. He worked in England from 1729-39 and died in Spain. An inscription or signature on the back of these two paintings has been read as 'Arniconi Pinxit'. Photographs of these would be helpful, as it seems likely to be a misreading of Amigoni.

The Collection has commented: 'Recent research via the West Midlands Museum Developments Expert Eye programme has suggested that the work is almost certainly 18th century, making Amigoni a more likely candidate as artist, though not conclusively.'

This painting and its pair do not seem light enough in touch and style to be obviously Jacopo Amigoni. What is needed is firm evidence if we are to take this further.

I think the attribution to Bernardo Amiconi can be discarded. He was chiefly a portrait painter, and his subjects were largely women. See examples below:

These two pictures of amorini or Cupids do not fit his oeuvre, and he signed "B. Amiconi" with the date (year) of the picture, without using the word "pinxit," as below:

These Worcester pictures (donated to the collection in 1850) certainly look 18th century in style. They are in need of cleaning and restoration, so they do not look their best. Below is a comparable picture by or attributed to Jacopo Amigoni (also known as Giacomo Amiconi):

We should also keep in mind that one of Amigoni's pupils was Antonio Zucchi, who also worked in England and also painted pictures of putti, though he was a lesser artist.

We should also address the symbolic or allegorical elements in these seemingly purely frivolous pictures. This is especially true for the companion picture, which is mis-titled, as it has nothing to do with geese:

The birds at lower left are a female pelican and her offspring, which are feeding from her. This is a fairly standard illustration of the ancient legend, whereby a mother pelican would pierce her own breast in times of famine, that her children might seek sustenance from her flesh and blood. When necessary, the mother pelican was said to offer this sacrifice at the cost of her life. See other examples below:

The standing Amor is pointing to the birds as an example to the seated one, who seems to acknowledge the moral lesson.

In the picture at the top of this discussion, the blond seated Amor holds a wreath and is being crowned with another one by the standing Amor. This could be interpreted as a Triumph of Love, or Love is Love's Reward.

Having looked at the pics available online for comparison, I would say that this picture is definitely Jacopo Amigoni. The painting of the Putti shows similar characteristics. The way the double chin on the seated baby is painted, the details of the breast and belly, the rather large hands, the face, the wings, the subject of a putti being crowned. Some of his paintings are in a rather smoother and more finished style, but not all of them. This may be considered a decorative work rather than a highly finished painting.

I think an attribution to Amiconi/Amigoni is reasonable. I had also thought, like Tamsyn, that in more decorative work his style might be less nuanced or individual and more generalized.

It is certainly in the style of Amigoni (who frequently signed his work as Amiconi), though without a good cleaning this would be difficult to confirm. Similar paintings by Amiconi are in the Royal Collection and owned by the Earl of Wemyss at Gosford House, East Lothian. Dr Richard Mead also owned an Amigoni featuring putti. I have taken photos of Amigoni's putti representing the four seasons that are overdoors at Nymphenburg, outside Munich. A recent book by Chiara Lo Guidice on Amigoni's longtime printing parter, Joseph Wagner, reproduces a number of prints of allegorical putti.
To my knowledge, Amigoni was not Zucchi's teacher, since he was travelling throughout Europe during Zucchi's formative years. However, they both studied with Zucchi's uncle.

This is from the Royal Collection:

This is from The National Gallery in Oslo and fairly close to ours:

OK, my link to the Oslo Amigoni misfired, so try this and click on the image for an enlargement:

There seems to me to be a difference between the examples of Amigoni's work as posted and the Worcester painting that is under discussion. In the posted examples the body torsos lack structure as does the depiction of hands which Amigoni tends to indicate rather than portray. Also Amigoni's palette is lighter and his backgrounds sketchy.

I agree with Jacinto Regalado 's stylistic analysis. From what little we know of Berardo (not Bernardo) Amiconi (Magliano de' Mursi, Abruzzo,1925-London 1878), this would not seem to be by his hand.