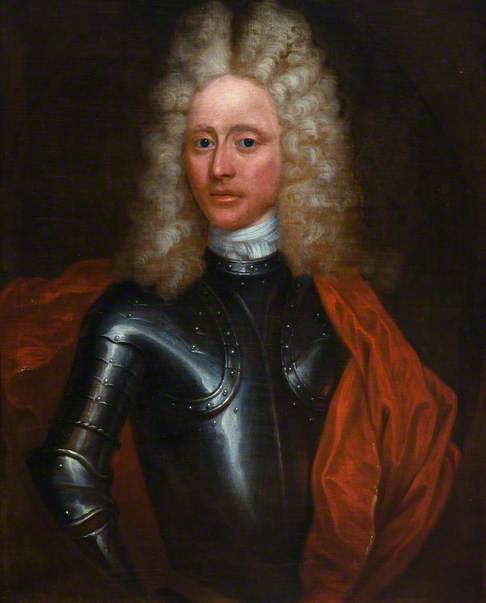 The artist's name is down as John Gandy and it seems to me that this could be a mistake. There are two Gandy's that this might be by James Gandy (1619–1689), a portrait painter that may have worked with Van Dyck, or his son, William Gandy (d.1729).

If this painting is signed 'J. Gandy' then it might one of less than a handful of extant portraits by James Gandy. Is the portrait signed? The title suggests a date of 1690, which suggests it is signed and dated.

The National Trust for Scotland comments: 'I agree with Tim about the confusion of the name of the artist. Stylistically, the portrait belongs to the latter half of the 17th century so might suggest an attribution to William Gandy, the son:

Gandy, son of James Gandy, was probably born in Ireland. For some years he was an itinerant painter in Devon and the west of England. He went to Plymouth in 1714 and eventually settled in Exeter.

However, the attribution states "John Peter Gandy" and there is a "circle of Gandy" attached to the record so it may not be either of the Gandy family mentioned.'

Useful biographical details of James and William Gandy can be found here:

Unless there is an earlier individual sharing the same sequence of names, the attribution to John Peter Gandy (aka Sir John Peter Deering) is highly questionable, as he was an architect, living from 1787 - 1850, and was a member of the Royal Academy, submitting only architectural designs and drawings to that august institution. See the following for details:

Stalled 2018 discussion: how about starting from the start?

Guillaume, thank you for re-starting the discussion and Jacinto for responding. I've asked the collection for help with these questions. Our contact returns from leave in early August.

The NTS Curator for North and North West Scotland has commented,

'There is no date/signature on this painting but the family member and the style of dress is c.1690; therefore it could be 1689 which would fit in with the artist James Gandy who died in 1689.

However, looking at the bio of the artist, it appears his main clientele were in Ireland and not Scotland.

I am afraid that the painting is in a property around 2 hours away so it is not on site for me to check. I would suggest an attribution of "circle of" James Gandy.'

James Gandy was an Irish artist - and the style of this painting is certainly Irish, not Scottish - and his patrons included the Molyneuxs and O'Neills. Some Irish Molyneux portraits are in Liverpool coming from the collection at Croxteth - Earl of Sefton's - including one of Richard Molyneux still unattributed. The National Gallery of Ireland should be able to help over this portrait. It has a significant National Portrait Collection
There have been serious exhibitions of Irish portraits which included paintings of the 17th and early 18th century [with catalogues]

Thanks for that suggestion, Martin. I've sent an enquiry to the National Gallery of Ireland.