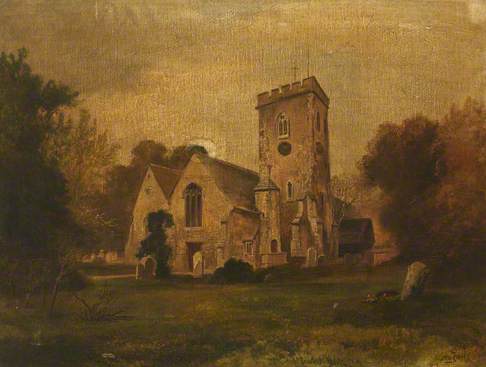 I'd like to make a tentative suggestion that the signature could read ‘JV de Fleury’. I've just discovered ‘John Victor de Fleury artist’ living at 80 Dyne Road - right next to the Willesden Council offices in 1901. Here is a bankruptcy notice for John Victor de Fleury with two of the addresses from which "JV de Fleury" showed at the Royal Academy https://bit.ly/3i0SeEX. The other painting is https://bit.ly/2W9X6js

There is a photo on the Alamy website (https://tinyurl.com/ar7e8pkj) of that church in 1898. I have cut down the Art UK image to match it for my composite (attached). This doesn’t help to identify the artist but I think it is an interesting comparison.

I cannot make out a date on this picture, but the other picture looks to me like 1895.

I believe that this watercolour on the website of Lunds Auctioneers & Appraisers Ltd. in Victoria, B.C., has a clear signature by the same artist. I have attached a composite made using one of the signatures above.

The signature of J D de Fleury - whose first names I am now fairly sure were John Victor and not James Vivien at all, but I'll come to that later - is unusually variable. Attached is a composite of more of them, all on oils - our two are top left for comparison. Frustratingly all of the clear ones date from the 1860s, while the only one that may be from the 1890s is perhaps the least clear (bottom right). I nevertheless feel there are enough common elements to give strong support to Oliver's suggestion; and there is more evidence that he was living in Willesden in 1906-7 (Electoral Register), and much closer to the church than Dyne Road - just 8 or 10 minutes' walk away, in Ambleside Road. I agree with Malcolm about a date on ours of 190(4?).

There are several of his works on Art UK (as James Vivien), and at least two of them look to have clear signatures: https://bit.ly/3ipru1h (bottom left) & https://bit.ly/3zG1PqD (bottom right). Could we see higher-res images of those details, please, if available - especially of the latter, as it dates from 1892?

After submitting the suggestion I noticed out that the museum has two other works by the same artist: one catalogued as by "Nile Heury" and a very rough sketch by "J V Flavey".

According to the census and marriage records John Victor de Fleury was born in c. 1829, either in London or Paris. I can't find any sign of James Vivien ever having existed.

There was an earlier artist called John de Fleury (1774 -1850) who also showed at the RA: I'll link to his obituary, as his details don't seem to be generally known.

Past dealers and researchers seem to have been quite free with the name JV de Fleury. James Vivien appears most often in searches for auction results. The text and dates are always similar, so one might suspect plagiarism.

However, it is worth looking at Thomas Fine Art, https://bit.ly/3ucmVvR, whose summary suggests underlying research. They introduce Miss Jane Vivian De Fleury and some relatives, including James Vivian, but not John Victor.

On stylistic grounds alone, in my opinion, Jane (or a relative) is not the same as our artist, who appears far less talented. For the same reason I also feel that s/he is more likely to be the author of the works on Art UK attributed to James Vivian.

Thus I feel uncomfortable about equating these artists on the grounds that we can't find BMD records for one of them. They may be French (or Channel Island, given some of the paintings). We don't know what Thomas Fine Art had access to.

John married his first wife Lydia Rebecca Johnston (b. February 10, 1828) twice in 1850 (on June 29 (Canterbury) and on July 1 (St. Paul, Hammersmith)). She was the daughter of William Johnston and his wife Lydia Scattergood Johnson (née Cook). Lydia passed away nearly 10 years after her marriage and was buried in Brompton Cemetary, London, on March 3, 1860.

The 1861 Census shows Lydia’s youngest sister Elizabeth Mary Johnston and her mother Lydia S. Johnston living with John and the children. John married his sister-in-law Elizabeth in London on December 4, 1862. I have attached this record because it shows yet another version of his signature.

He married Ellen Maria Bennett (b. October 9, 1853), at St. Mary’s, Kilburn, on June 17, 1896. She was the daughter of Henry Bennett and his wife Ellen. The record for this marriage, attached, shows John’s father was “John Philip de Fleury (deceased)”. The 1901 Census record shows John and Ellen living in Willesden, as Oliver stated. This record is difficult to locate because it is filed under the name “John V De Keary”.

He is very likely the “Victor De Fleury” who passed away in Hendon, which is near Willesden, in Q4 1908. I have attached the record.

His wife was shown as a widow in the 1911 Census, living in Willesden. On that record she was a “teacher of drawing”. Ellen passed away in Portsmouth in Q1 1918.

Yes, I agree with all of that. Marcie, I wonder whether you and I and Kieran (and of course any others who like to do it) shouldn’t come to an arrangement whereby we warn each other when we are working on a full and detailed genealogy of a particular person? - there seems little point in duplicating many, many hours of work as has happened here (and in fact several times since you joined the forum with such single-minded energy). The others could wait till you/we have posted, and then pick up on anything important that's missing or that we disagree with. I did actually mention I was working on him on the Lake Como thread (https://bit.ly/3ofMhIl), but I should probably have made it clearer.

On which subject, though I have now binned all my duplicated genealogical stuff, I am still working on his exhibiting history (and that of the mysterious Miss J Vivian), reviews, and any other mentions of him in documents, books, letters, etc.

I am 95% sure he is unconnected with the earlier John De Fleury (b. Sep 1774); in the latter's Will (proved 4 Dec 1850) there is no mention whatever of any children - the only family listed are his nephew George Brown and niece Charlotte Blake (his sole executor), "wife of my dear friend Mr John Day Blake of Stockwell Common". Charlotte and George were siblings, and in fact not John De Fleury's blood relations, but those of his late wife, nee Elizabeth Brown. There are several signatures of John De Fleury and of his father John De Fleury Senr on marriage and other documents, and both of them sign De Fleury with a capital 'D', unlike John Victor and his family who always use a lower-case one. JDeF the earlier artist was apprenticed to a drawing master at the age of 14 in June 1789; his father JDeF Senr was a schoolmaster, and quite probably a refugee from France - he married in England, but his wife was also of French stock.

My suspicion is the name "James Vivien de Fleury" originated in an attempt to manufacture a biography for "J. Vivian" the otherwise untraceable painter of Venetian views. From Vivian's addresses, it seems that "J Vivian" was actually a pseudonym for a member of the Meadows family - the pictures were sent from addresses occupied by James Edward Meadows. But I think that's probably material for a seperate discussion.