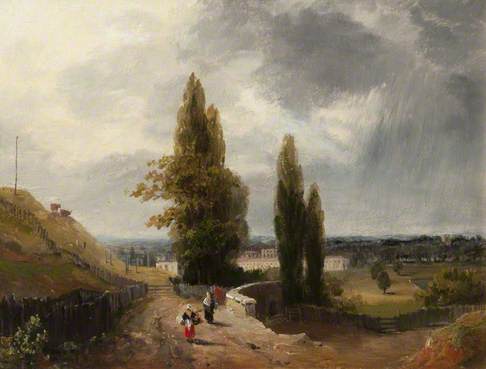 Could anyone help me please find out more about the artist of this 'Heaton Mersey' painting? It says it was painted by A. Fraser in 1831. Could this be Alexander George Fraser (1786–1865)?

I have been in contact with Lancaster City Musuem where the painting is held to find out more about it. They kindly informed me that it was transferred to them in 1923 from the Storey Institute which is also in Lancaster but they have no information on when it arrived at the Storey or from where it came.

In the background is the Heaton Mersey bleachworks which was built by Samuel Oldknow c.1785–1786. The family that owned the bleachworks around 1830 were the Parkers who were from Cumbria and at one time owned Warwick Hall – pure speculation but maybe this is how it found its way to the Storey Institute.

The collection comments: 'I have now double-checked our paper records and they all refer to "A. Fraser" rather than Alexander George Fraser. I am not familiar with the latter's work so could not comment on our painting having been done by him. It would be incredibly interesting to know if it is though, as we have no information about A. Fraser.'

The style is not like that of the other pictures under the name of Alexander George Fraser on BBC Your Paintings, but Mungo Campbell of the Hunterian Art Gallery, University of Glasgow, and Helen Smailes of the National Gallery of Scotland could probably give more authorative opinions as to the identity of this Fraser

Here is a link to a 6inch O.S. map of 1845, not long after the scene was painted http://maps.nls.uk/view/102344114
You can enlarge the map to see more detail.
The scene was painted from the elevated land to the north of the works.
I am puzzled by the church tower which rises from the woods to the right of the scene. It is where the village of Gatley lies, but it did not have a church with a tower until the 1880s.

Please can the collection advise whether or not this work is signed and dated? If not, what is the basis for the atribution to the date 1831?

Thanks for the map link. My thought is that the church tower is St Mary's Church, Cheadle which would fit timewise I think. The painting brings to life the 1845 map by showing Heaton House - with it's large arched window - on the right of the access track to the mill. Many of the bleachwork owners lived here up to the early 1900s. And you can just see the resevoir which is shown on this and later maps.

I visited Lancaster City Museum to get a closer look at the Heaton Mersey painting. It is monogrammed and dated bottom left (unfortunately my photos of them are terrible ... long story) but hopefully one of you can identify the artist from it.

The artist is recorded as A. Fraser, although the label alongside the exhibited work says A.N. Fraser. There doesn’t seem to be a known artist of the period with that name. The painting has been on the wall over 20 years, apparently, and nobody is sure where that attribution came from.

Discussions have centred on whether the painting might be by the Scottish artist Alexander George Fraser. I’d say not, plus there are no records of him working in the Manchester area that I could find. The painting seems to be dated 1831, but it could possibly be 1851. The latter would allow AGF’s son, Alexander Fraser Jnr (1827 – 1899) to be a contender. There are similarities in subject matter but his handling of paint is more free, plus his monogramme is a distinct ‘AF’. Again, no record of him in the area.

As for the scene, it appears accurate to the topography of Heaton Mersey and the landscape beyond (I used to live there). The pack-bridge in the foreground and waterway under it may have been part of the bleachworks complex which was in two parts.

Amanda, thank you for taking time to visit the museum and adding some new information to this discussion. It would be good if someone can help shed more light on the artist from the mongramme and date details you have provided. In terms of the scene, I wonder if the dress of the workers carrying cloth to the works could help date the work? And, if you are interested in finding out what's going on today in Heaton Mersey, have a look at http://www.hmvcg.org.uk.

It does look to be dated as you say. There seems to be a mark to the left of this which looks related but I can't make out any initials.

The monogramme is to the left of the date, also in red paint. It can perhaps be described as an anchor shape with, on the left, two additional arms on the horizontal joined by a perpendicular stroke. It creates a shape a bit like a butterfly wing on the left side. I couldn't discern any obvious initials.

Attached is another copy of the very poor photo previously posted.

It's looking doubtful then that this A. Fraser is a known artist.

Nevertheless, the painting is a nice impression of the landscape in Heaton Mersey around what looks from the date and image to be early to mid 19th century.

In the distance is what was originally Samuel Oldnow's bleachworks, built in 1785/1786.

Many thanks to everyone who has contributed to this discussion so far. We might not have identified a candidate for our 'A. Fraser' but after liaising with my fellow group leader as well, I am happy to recommend to Art UK that we can now close this longstanding discussion with the recommendation that execution date of 1831 seems plausible.

Acquisition method
gift from staff and students, the Storey Institute, 1923