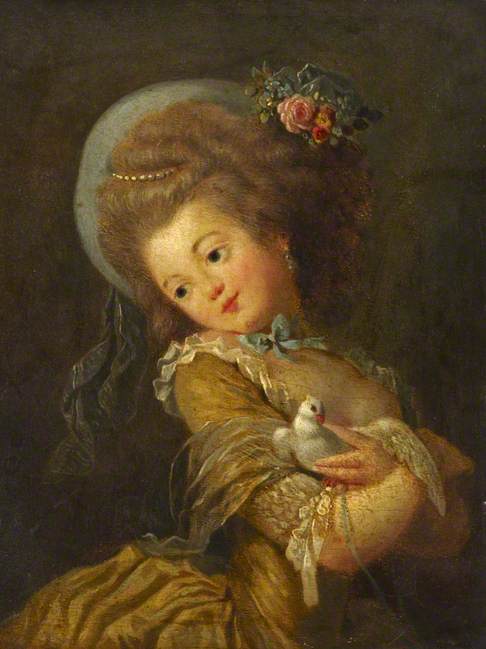 It is a slight variant, in reverse, of a painting of which there is a black-and-white image that was sold at auction some time ago (I don't know where or when, but perhaps someone who is a subscriber to ArtNet could find out), as from the Circle of Schall. Both must derive from one of the whole-length single figures for which Schall is chiefly known. One whose upper part is fairly similar was one of a group of six auctioned by Maitre Marc-Arthur Kohn at Drouot Montaigne, Paris, 12th June 1996, lot 33.

Alastair Laing appears to be right about this. Indeed, the work was already attributed to Schall when it was deaccessioned from Leighton House. See the Museums Association website:
https://bit.ly/3dhq4A8

As 'La Colombe Favorite", "after Schall", the British Museum holds a print of the work:

"The favourite dove, after Schall; a young woman seen half-length, turned to right with her head tilted to the left, holding a pet dove to her breast; published in 'L'Art', 1880, volume XXI page 54. 1880."

The original would appear to have been (1880) in the "Collections de San Donato", though it does not appear in its catalogue of 1870:

A composite of the BM print with this Discussion's image is attached.

It is at least after Schall, who was evidently influenced by Greuze.

Fragonard's style of girl with dove is very different:

It does not appear in the 1870 catalogue because it was presumably acquired between 1870 and 1880, the date of another catalogue for which the BM etching was apparently made as an illustration.

This is the sort of picture that Greuze was putting out in the 1780s, and it certainly looks pre-revolution.

and it title page:

I think it is at least possible that this picture is the same one that was in that 1880 sale, meaning it may not be a copy. This picture was presented to Leighton House Museum by Charles F. Beadwell in 1956; is any more known about provenance?

Here are two other similar pictures by or after Schall:

He favored full-lengths, but not always.

Our picture could be listed as "by or after" Schall properly enough.

The BM print and the 1880 catalogue one are clearly of the same picture. The 1870 catalogue was also from an auction however:

so while the painting it represented might have been acquired by Paul Demidov in the 1870s, it might also come from the collecting of his uncle Anatole (d 1870) or his grandfather Nikolai (d 1828) and just not put up for sale previously. It doesn't seem to be in Anatole's taste particularly (he seems to have preferred art more in the Classical style) so most likely it was collected by Nikolai. If so it probably would be a genuine Schall - who only died in 1825 after all - as this is a wealthy and well-connected patron collecting near contemporary art . And a family so rich that they're not going to collect copies.

Whether the Northumberland picture is the one from the 1880 sale is another matter. There are differences in the face, and the flowers in the hair in the print are poorly defined. This could be because the picture is a copy, though other Schall picture tend to show similar, rather stylised faces eg:

or it could be more due to the engraver, Benjamin Damman, was 'normalising' the face to current tastes and de-emphasising the flowers to balance the picture. You see a similar tendency in the second of the ArtNet links from Jacinto, which is clearly a copy, as far as one can tell from a poor photo, with a rather 'modern' face.

(The other link looks like a different picture on the same theme that sold through Christie's Paris in 2004
https://www.christies.com/lotfinder/Lot/jean-frederic-schall-strasbourg-1752-1825-paris-young-4231100-details.aspx
again with a similar stylised face).

So it could be the same picture or a faithful copy and only filling the provenance gap or an expert telling us if the Northumberland picture has the signs of a genuine Schall would let us know.

I expect Damman's etching was not meant to be an exact rendering of the painting, but rather a reasonably close approximation. A reproductive line or burin engraver would have been a better choice for something more exact, but by 1880 such engravers had gone out of fashion and etching was much more in vogue.

I contacted Leighton House Museum to ask for further information about the painting's provenance and received the following very informative reply.

"The painting was initially donated to the Museum in 1856 by local resident Charles F Beadwell. I’m afraid I don’t have any further information about him. When Beadwell donated the work it was noted as being “attributed to Fragonard” and this attribution remained until our 2018 review of our reserve collection prompted us to do further research into the piece.

We consulted relevant curators at the National Gallery who suggested that the work was in fact by Schall, and we updated the attribution accordingly. They later found a catalogue entry attached from the Conde Nast sale, 5-6 Jan. 1943, New York – which includes an image of a painting very similar but also clearly different to the one formerly in the LHM collection. This confirmed that the painting formerly in the Leighton House Collection, is a copy of a work by Schall produced either in his studio or by another artist."

I think this concludes the discussion fairly decisively and the above information will be forwarded to Northumbria University.

Title
Portrait of a Young Girl Holding a Dove