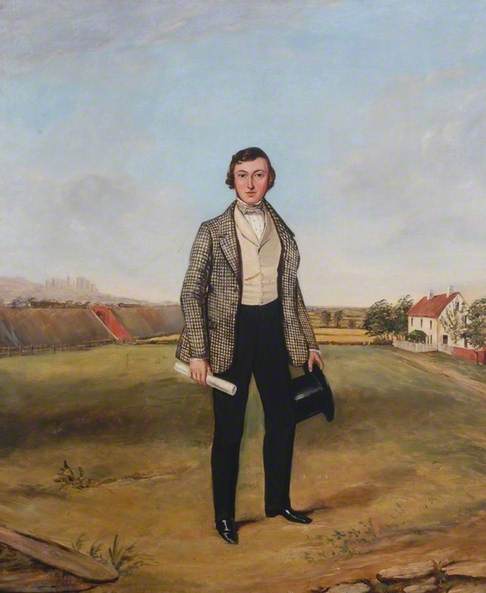 There are sufficient clues in this picture to identify the young man. The building on the right is the cottage at Wylam, County Durham, which was the birthplace of George Stephenson in 1781. To the left of the scene is the Brusselton Incline, which also has connections with the Stephenson family, and was eventually assimilated into the Stockton and Darlington Railway after it opened in 1825. So it is not surprising to find this portrait of a young George Stephenson at Darlington.

The Collection has commented: ‘'The work was catalogued by Darlington Borough Council in 1988 as ‘Portrait thought to be of Robert Stephenson’, and is listed as this in our records however these do not confirm the subject’s identity. If a public discussion is likely to provide evidence of the subject’s identify we would happy for one to take place.’

The Brusselton Incline was built between 1820-1825, so this picture cannot be earlier than that date, by which time George Stephenson was in his late 30s or early 40s, and if the young man is supposed to be George, his clothes look rather "Victorian" for 1825 - perhaps one of the costume experts might like to comment. Robert Stephenson seems more likely.

Brenda, I have asked Lou Taylor as Group Leader if she might be in a position to comment here. I have added the Dress and Textiles group to this discussion, and apologies for the delay getting back to you on this. David

Brenda, Lou Taylor has been in touch about this, and will shortly review this in terms of clothing. David

I have attached a composite of the Art UK work and his self-portrait, c. 1830, from Wikimedia Commons https://tinyurl.com/36vjnp27.

Yes, these are different men but note in particular the similar vest and the similar hand holding the hat by the brim (with the crown of the hat closest to the leg in both works).

I have also been flipping through his works in the book “Views in South America - 1978” on the Catawiki website and I think the mood is similar - kind of hazy. https://tinyurl.com/4p8tu3vj

I think this was painted rather later than one might think. It is clearly not intended to be realistic, more symbolic, even icon-like. George Stephenson's birthplace, on the River Tyne near Wylam, is nowhere near the Brusselton Incline, near Shildon in Co. Durham, and the source of the image of Stephenson may yet become apparent. In the far left background is what looks like a castle, presumably intended to be Prudhoe castle, over the river from Wylam.

The cottage is approximate only, e.g. chimneys in the wrong place, windows and door(?) on gable end.

We should not suppose that the date of the Incline, Stephenson's dress or his apparent age have much connection with one another. I believe it is highly unlikely to have been painted from life.

As usual, it would be helpful to see the back of the canvas and stretcher, if original, to see how old it looks.

Those are very interesting points, Andrew, and I think they make sense.

I have searched in vain for 19th century works that show George Stephenson’s birth place as a white house with a red roof. However, a painting by John Lucas (1807-1874) that was commissioned by Robert Stephenson “shortly after his father’s death” includes some elements that are similar to those in ‘our’ painting: George Stephenson in a plaid jacket, a colliery in the background that is similar to the castle in the mystery work, and a rubble house that is almost white. See “The Birthplace of the Locomotive”, c. 1850, here, https://tinyurl.com/5854jayk. Note that other depictions of the house more closely match the one in the first attachment, which is an extract from the ‘Illustrated London News’ of October 15, 1864.

A portrait by Lucas of Robert Stephenson is on Art UK, here, https://tinyurl.com/4j7z4psc. I have used it in the composite, attached. Father and son look very much alike but the plaid jacket, in my opinion, is intended to suggest George Stephenson.

There is an old photo of the picture on National Portrait Gallery files. It provides the following information. The picture was sold at Sotheby’s on 12 July 1967 lot 120, where it was bought by Lowndes Lodge gallery. It was described as George Stephenson, English school, circa 1830.

Like Andrew, I suspect that the portrait is later in the 19th century and is a confection of elements associated with Stephenson. That is, the portrait is intended to represent the young George Stephenson but was not produced at the time.

Indeed, when George Stephenson was at the age shown in the picture, he would probably not have been sufficiently famous to warrant having his portrait painted. I think Andrew is probably right and this is a later composite picture about, rather than of, the young George with various significant bits of his history.