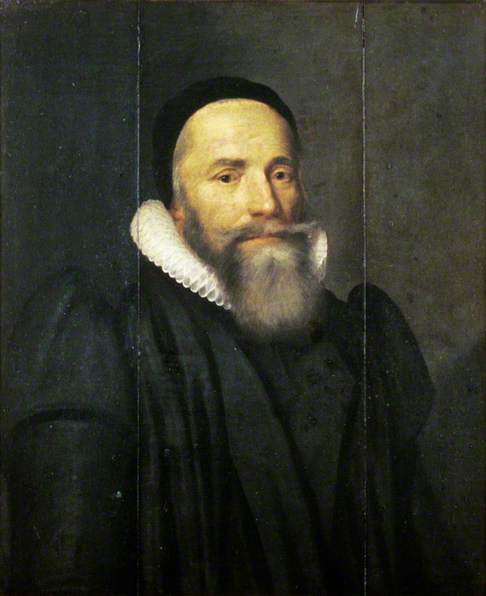 What could this portrait's relationship be to another, similar work by George Jamesone (c.1588–1644), held within The National Trust for Scotland's collection? Is this 1620–1750 oil on wood painting at the University of Aberdeen a copy after Jamesone, or could it be another version by Jamesone?

See The National Trust for Scotland's 'Patrick Forbes of Corse (1564–1635), Bishop of Aberdeen' by George Jamesone, oil on canvas:
http://www.bbc.co.uk/arts/yourpaintings/paintings/patrick-forbes-of-corse-15641635-bishop-of-aberdeen-196264

This amend will appear on Art UK in due course.

Purely an 'impression' based on the photographs, but the Aberdeen University one looks finer in quality. Could it not be the original version, or at least an early copy (being on panel). It could be an ideal example to investigate using dendrochronology, if it is on oak boards. Technically, and in terms of modelling of features and dress, it appears considerably more accomplished than the really rather mediocre National Trust for Scotland example.

Can we have a high res image? Happy to send it to Dr Duncan Thomson, who wrote the monograph on Jamesone. I agree with Michael's comments on the quality of the NTS example.

Aberdeen University’s version of ‘Patrick Forbes’ appears earlier than the NTS version. The most obvious reason for this being the case is that it is painted on panel. However, what is more indicative of this chronology is, stylistically, the artist of the Aberdeen version appears to have more sense of the structure of the human skeleton underneath the sitter. Therefore, the painter of the Aberdeen version is more likely to have seen the sitter in real life.

If this is a Jamesone, it has been subject to restoration later in its life. Jamesone’s subjects, as a rule, do not have such a broad variation in flesh-tones. Furthermore, Jamesone found rendering different strands of hair difficult to master; preferring to paint a general idea of hair in block-colours.

Interestingly, in 1761 Jamesone’s grandson, Cosmo Alexander (1724-1772) was commissioned to restore the university’s collection of ‘Sibyls’. After being called in to do this, Cosmo was given the task of re-working more of Jamesone’s originals. It is possible, therefore, that Aberdeen’s ‘Patrick Forbes’ is an original Jamesone which has been edited by Cosmo Alexander.

Much work has been done on Aberdeen University’s art collection by Mary Pryor. It would be worth consulting her PhD thesis (‘Painting the Profile’) which is available electronically via the Aberdeen University library catalogue. It may not provide the answer, but it would be an excellent place to start.

Passing on a message:

'There is no evidence of Jamesone's hand in this portrait. It should probably have a appeared in my book as a rejected attribution, However, it is a Jamesone 'type' and is therefore likely to be either a later copy or just possibly a wholly repainted original. Difficult to say without seeing the original. Technical examination required? Incidentally, Jamesone's correct birth date should appear as 1589/90. Spent the best years of my life establishing it!
Duncan Thomson'

Please find the high resolution image attached, with permission from the collection.

This discussion has had no activity for some time and appears to have reached a conclusion. I recommend closing the discussion

The collection has been contacted about the recommendation that this painting is likely to be a copy after George Jamesone.

The collection agrees with this recommendation.

Medium and Support
oil on wood