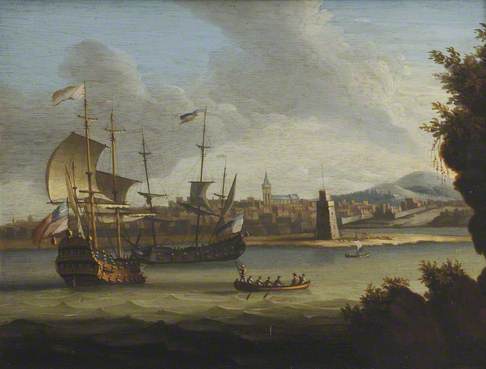 The far ship is Dutch, passing an English two decker flying what would normally be the flag of an Admiral of the Red -who was the Commander-in-Chief of the fleet- and whose flagship was normally a three-decker, first-rate ship. I am not convinced its Plymouth: there are enough images showing the church was with a square tower, not one with a pyramidal roof, nor does the freestanding tower ring a bell.

This discussion is now closed. The title of the work has been amended to 'An English and a Dutch man of war off Messina', with details of the source print stored in the Art UK Notes field.
Thank you to everyone who contributed to the discussion. To anyone viewing this discussion for the first time, please see below for all the comments that led to this conclusion.

I can't see anything that reminds me of Plymouth in this view either in the town or the hills in the distance. I think it's a non-starter. I think I'd be looking to a location in Northern Europe.

St Malo is similar but missing the hills in the background.

I think it is the Port of Messina. See this image for “Gezicht van Messina de Hooststat van Sicilie” from the Royal Museums Greenwich. https://tinyurl.com/4myp3t9s

Well spotted Marcie: that looks like the compositional source, so what is actually shown is 'An English and a Dutch man of war off Messina' (rather than two Dutchmen as in the print), though whether the painter who 'ripped it off' called it that is anyone's guess. Schenk was a Dutch publisher operating in Amsterdam and Leipzig, so not himself the artist of the print, though the 'Amsteld C P' lower right (and whatever the C P means) may indicate this one was published in Amsterdam: the printed title an Dutch and Latin of course means 'View of Messina, the main city of Sicily'.

Its has a same-size pendant already reidentified as showing Sheerness rather than Plymouth, also print-related and also on wood panel;

The panels are exactly the same size which suggests they were made together but I doubt chasing an artist name will lead anywhere.

The print was, in fact, published in Amsterdam.

Thanks Jacinto: I'd forgotten the abbreviation and should have been clearer that Schenk's name at lower left may indicate he was actual engraver, though I doubt he drew the image. As Wiki points out he also recycled others' plates and when that happens inscriptions often change. One has to bear that possibility in mind, albeit as part of a series it is probably not the case here.

I have asked David at Art UK to tell the collection that Marcie has solved the puzzle and that we can now wind this one up.

The image details provided at the top raise two other points to note. The manner of painting the English ship, with dabbed highlights giving form to the carved 'gingerbread' work and marking the guns, shows the painter had some familiarity with van de Velde the younger. He may also have used something of his as model for the English ship which -as with the disposition of its sails - is not a direct copy from Schenk's Dutch one except in the angle of view. I don't however recommend any change from 'English school' as regards artist (or for the same-size pendant mentioned above). Items like these can usually only get 'names' when a clearly signed exemplar appears and shows the 'slot' into which others can also be dropped.

The apparent grain of the timber support panel looks like it might be mahogany (rather than oak, as one would more normally expect in the early 18th-c.). That would need checking but if so it would be quite an early use: it may just be deceptive, however, and I doubt these pictures are as late as the 1740s-50s when mahogany would be a commoner alternative.

As already mentioned, I suggest the title here is changed to 'An English and a Dutch man of war off Messina' and the print source added in any back-up notes (inc. on Art UK). Schenk's business was international, including selling into England, so there is nothing surprising in his image being used as a copy model.
Thanks again to Marcie, and others who chipped in with ideas.

Pieter, I have emailed as requested. David

The Collection has commented: 'Thank you very much for this: We’ve been following the discussion with interest. Having taken a look at the Messina print, the connection seems obvious, and we’re happy with the change being made to the record, and will adjust our inventory accordingly. Please pass on our thanks to Pieter, Marcie, and Jacinto for their superb detective work.'

Thanks David, and all: this one can now close when ready.

Title
An English and a Dutch man of war off Messina