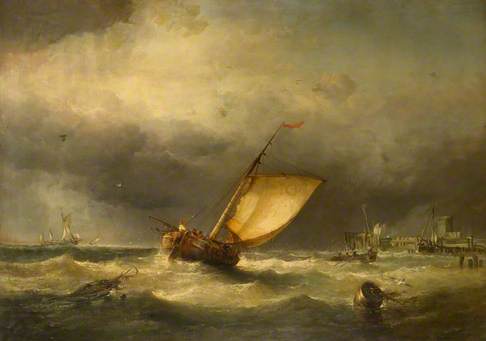 It is possible this is by Edwin Hayes (1819–1904). Though not wholly convincing, it is his general subject and treatment.

The collection would welcome any further thoughts.

The two most likely piers, if this is by Hayes, are those of Southwold and Gorleston in Suffolk before their present replacements. Suffolk local historians might be able to advise.
Hayes was a very prolific artist at the RA, RHA, RSA, GIFA and elsewhere , and had two one man shows at Dowdeswells , but must have painted pictures which were not exhibited in shows with catalogues

I'm afraid neither of the three preceding comments have anything useful attached to them. Please attach links that lead directly to the specific item you are trying to bring to attention.

I'm afraid we're getting spammed. Can we get these posts (and the three posters) removed, please?

These posts have been removed. Please see our code of conduct: https://www.artuk.org/artdetective/footer/code-of-conduct

Does anyone have any thoughts to carry things further here ? Its a dormant discussion that needs progress or closure, even if only with recommendation that the collection note Edwin Hayes as a possibility.

I am only familiar at first hand with the Laing's 'Dutch Pinks', so I can only suggest 'Manner of Edwin Hayes'.

Having just looked at a few Hayes' seascapes with a layman's eye,there are plenty to see,here's another one on Art Uk
https://artuk.org/discover/artists/hayes-edwin-18191904
I would suggest Hayes is a bit crisper and more colourful than this painting,which is however in a very similar style.

The attached closeup may be helpful.

Could the sail be showing the name Dord, as in Dordrecht?

Or even just Dort?

A close-up of the buildings on the shore/pier might also help.

I think it looks a lot like this work by Webb (in particular, the way the ship and yellow sail are depicted, and the way the buildings are depicted):
“After The Storm (Off Mont Orgueil And Gorey, Jersey)”
Manchester Art Gallery
https://tinyurl.com/35tw9aw3

I have attached a composite for ease of comparison.

It could possibly be by Edwin Hayes. However the painting looks to be extremely dirty and yellowed by discoloured varnishes. It is also showing up a fair amount of old restoration even through the photograph yet alone what it must look like in the flesh. Edwin Hayes’s signature can be quite faint at times and could well have been removed inadvertently in the past by a ham fisted Restorer..I would suggest they get cleaned and re-appraised.

Well-spotted Marcie: I think that's a sufficiently close parallel for at least attributing the Stoke picture to Webb (the Manchester one is signed, so not in doubt). Apart from general manner and the fact that the canvases are the same size, one could overlay the central boat images over each other and -allowing that one is a Dutch type shown from a low angle and the other English and from slightly above -they would be practically congruent in angle and the relations of parts: a telling detail is the form of the red burgees, which are near-identical.

Returning to Kieran's point about the (rather unclear) sail inscriptions, we know Webb painted Dordrecht (Dort) and Dordrecht boats: this is an example already discussed with the name on a sail, though the background is not sufficiently specific to conclude it shows the town

This is a more offshore scene: a detail of the buildings at right, as Kieran has already requested, would be worth a look though probably not identifiable.

James Webb, “artist”, is shown on the 1881 England Census living at 43 Abbey Road, in Marylebone, London, with various family members, friends and servants. His age is shown as 46, and, if he provided the correct information, he was born in 1835.

1835 is correct: born Chelsea, 11 April. There is an Art UK biography draft but not yet online and I didn't have note of his 1881 address as Marylebone: wife Jane, b. Newry, N.I. c. 1835 (and a cousin, Amy Hutchinson, was also living with the family then)

There's a detail of the jetty attached.

Thanks Marion. Probably not an identifiable place but there may be an inscription or date on the top of the buoy.

As can be clearly seen in the Manchester painting by Webb, the work is conspicuously signed on the rear or the vessel. In keeping with some artists' habit of not signing in the corner of the canvas but in or on some element depicted, such as on some floating debris or buoy, I wonder if this discussion's painting might warrant closer inspection to see if one is lurking somewhere on one of its features, such as the debris bottom left of the floating barrel/buoy to the right.

Also, in the same composite, while the representation of the numeral 3 might be a design that featured on all such sails, it is worth noting that rendition of Webb's 3 in the Manchester painting is identical to the 3 on this discussion's one.

Finally, the tall building shown in Marion's attachments could be the housing for a windmill, albeit here without its sails, which suggests that this is a Dutch scene. An example of one at Dordrecht by Cuyp is attached.

Kieran, I think the building with its sloping red-tile roof looks more like the one in this work by Webb on the Invaluable website:
“THE COAST AT NORTH SHIELDS”
https://tinyurl.com/z8a6jpxe