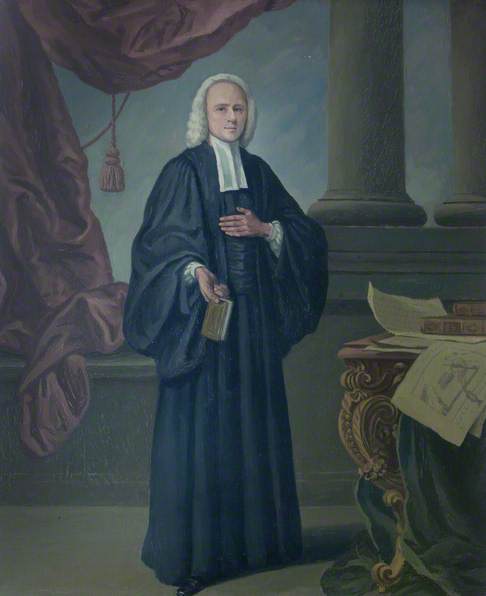 I am not convinced this is painting depicts Owen Charles Whitehouse, MA, DD, Student, Professor and President of Cheshunt College.

It seems that it could be another version of the painting 'George Whitefield (?), Orphan House at Bethesda', which can be seen at http://www.bbc.co.uk/arts/yourpaintings/paintings/george-whitefield-orphan-house-at-bethesda-204337. The paper hanging off of the table in the 'Owen Charles Whitehouse' portrait is a plan of Whitefield's Bethesda Orphan House in Savannah, GA. Compare this with the frontispiece of James Paterson Gledstone's biography, 'George Whitefield, MA, Field Preacher' (visible here: http://quintapress.macmate.me/George_Whitefield/Whitefield_2.html#26). Unless Mr Whitehouse was deliberately attempting to make himself look like Whitefield at 29, it seems unlikely the sitter is Owen Charles Whitehouse.

This work has now been attributed to 'after Francis Kyte (active 1710-c.1750)', the execution date has been added as 'after 1743', and the title to 'George Whitefield (1714-1770)'. The following painting description has also been added, 'Originally believed to be Owen Charles Whitehouse (1849-1916), this portrait has now been identified as being of George Whitefield (1714-1770).' This change will appear on the Your Paintings website by the end of June 2014. Thank you to all for participating in this discussion. To those viewing this discussion for the first time, please see below for all comments that led to this conclusion.

It is indeed Whitefield and related to prints by James Moore and Robert Houston after a portrait by M Jenkin. These may be after a different version of the portrait than that in Westminster College as the face is rather different. Compare also an unattributed mezzotint after Jenkin in the National Portrait Gallery
The multi-volume Kunstlerlexikon in the course of publication in Munich by de Gruyter might have an entry on Jenkin.
Otherwise the Telfair Museum of Art in Savannah might be able to provide you with information on this painter , as might the Savannah History Museum

Martin, I am confused… surely it is an open and shut case - is not the painting this person has enquired about much more closely related to the Faber mezzotint after Francis Kyte's portrait than the later prints after Jenkin's picture (a work which itself genuflects to Kyte)? In fact if it is a mid-18th century painting at all (it's difficult to tell from the photo) then probably this is the portrait by Kyte.

What on earth is Westminster College Cambridge, I wonder? Never was such a thing in my day.

Thank you very much, Richard, for reminding me of the Faber mezzotint. However, this portrait is definitely not by Kyte, on whom I have recently written an entry for the de Gruyter dictionary of artists [he was better than this and much closer to George Beare, who conceivably taught him to paint in the West Country, where Kyte started a fresh career, having been convicted of forgery . Kyte himself was originally a practitioner of mezzotint] - but you are partially right - there is a 1743 portrait of Whitefield said to be by Kyte in John Street Methodist Church, New York, which was unknown to me when I wrote my entry [35 1/2 x 27 1/2 inches]- but I do not believe that he was the artist of this either.
Both the Westminster College portrait and the New York portrait may well be a copies of the original Kyte portrait, which at one time may have been in the Whitefield Memorial Chapel, 79a Tottenham Court Road- this is what Faber worked from, and was probably painted in Bristol.
However Kyte himself may have been copying another picture - for both the Westminster College and New York pictures look more like the work of American artists than of British artists.
Westminster College is a college founded by the Presbyterian Church of England. It is housed in a fine Arts and Crafts building designed by H T Hare in 1899 on the far side of The Backs and overlooks a sports ground used when I was at school in Cambridge 60 years ago by St Johns College Preparatory School. I don't know if is now a full part of Cambridge University

That is very interesting, thank you. Are you saying, then, that Kyte's portrait was a copy of an American portrait, or just that the copyists who did the Westminster & New York paintings were Americans? I just wondered if the Westminster picture was early 20th century, something like that.

Kyte was being called a painter as early as 1725 (in the reporting of his forgery case), so evidently he was painting before the scandal. I doubt he was taught by George Beare, though, who was only born 1724/5, and died in his mid-20s. Judging from his probate Kyte was based in London for the last decade of his life (albeit he died in Bristol).

I think that the Westminster and New York paintings are American - you may be right in thinking that the Westminster painting is much later. It cannot be totally ruled out that Kyte was working from an American model, but it is indeed more likely that he painted Whitefield in Bristol. There is a portrait of Whitefield in Pembroke College, not related to the Faber mezzotint, which might be by Kyte. I do not know its provenance. It is not the source of the Faber print after G. Beard [surely a lettering man's error for Beare] of Whitefield , impressions of which are in the NPG and BM, which shows Whitefield's pronounced squint. No certain portraits in oil by Kyte have yet been identified before c. 1740, and his clientele seems from the few surviving examples to have West Country connections. He could have painted Handel in Bristol- but we know so little about his paintings as yet. You are probably right about Beare, who was a much superior artist to Kyte, but Beare's portraits are undoubtedly close to those of Kyte

I wonder if Martin and Richard would like to comment on the relevance of the other portrait of Whitefield at Westminster College to this fascinating discussion: http://www.bbc.co.uk/arts/yourpaintings/paintings/george-whitefield-orphan-house-at-bethesda-204337. Although in very poor condition, it looks as if it might be a better quality version of the portrait under discussion.

This other painting looks to be earlier, but probably still a copy after the Faber mezzotint. The modelling, particularly of the hands, is feeble . One is surprised that Whitefield has not dropped the book! It is certainly not by Kyte. There was probably considerable demand from Meeting Houses to have copies of the Kyte portrait. This one looks 18th century and British and not like the painting in New York.
As far as I know there has been no survey of 18th century portraits in Britain or America

Dear all,
Thank you so much for all this amazing detective work!
I wanted to quickly reply to earlier posts about Westminster College, Cambridge, to clarify the provenance of the paintings. As Martin Hopkinson says, Westminster College was founded by the Presbyterian Church in England in London in 1844 as a training college for ministers, and moved to Cambridge in 1899. We now serve the United Reformed Church, but we're still here on the same site, on the Backs, opposite the playing fields!
However, in 1967, Westminster College joined together with Cheshunt College, itself originally founded in 1768 at Trevecca in Wales by Selina Hastings, Countess of Huntingdon (1707-1791). Both the portraits being discussed here (Whitefield and "Whitehouse") originally came from Cheshunt College, and the Countess's friendship with Whitefield would perhaps explain why we hold them. Whitefield preached the sermon at the opening of her college in Trevecca in 1768, and he also bequeathed to the Countess the orphanage at Bethesda, Georgia, which Digby James mentions in his original post.

Yes indeed, thanks everyone for following up on this.

I have been in contact with John Street Methodist Church in New York and the minister kindly sent me a photo of the portrait taken with his phone. This might determine my port of entry into the US when I fly over in October to give a lecture on Whitefield.

To add to the information about Cheshunt College, when the lease expired on Tevecca College (now a farmhouse, College Farm, 1/4 mile north of the Presbyterian Church of Wales Coleg Trevecca - they're often confused) in 1793, it moved to Cheshunt and became Cheshunt College. That moved to Cambridge in 1906. The Countess having reluctantly become a Dissenter in the late 1770s/80s, even though she set up her own denomination (The Countess of Huntingdon's Connexion) many churches became Congregational, and Cheshunt was a training college for mainly Congregational ministers.

I think we can sum up this discussion and conclude that this portarit, and the other portrait of George Whitefield at Westminster College (PCF ref 204337), are copies of the original portrait of George Whitefield by Francis Kyte (1710?-1744), painted in 1743 (present location unknown). There are many copies of this portrait and some may have been made from the mezzotint engraving by John Faber II (c.1684-1756).

So, officially, I think we can sum up this discussion and conclude that this portrait, and the other portrait of George Whitefield at Westminster College (PCF ref 204337), are copies of the original portrait of George Whitefield by Francis Kyte (1710?-1744), painted in 1743 (present location unknown). There are many copies of this portrait and some may have been made from the mezzotint engraving by John Faber II (c.1684-1756).

Yes please, it seems very sensible to me to update it - thank you all for your detective work!

Could we possibly also add a note in the description to say "Originally believed to be Whitehouse, this portrait has now been identified as being of Whitefield."?

I would make sure you use the full names and dates of the two sitters in the amendement to the description, i.e.

Description
Originally believed to be Owen Charles Whitehouse (1849–1916), this portrait has now been identified as being of George Whitefield (1714–1770).